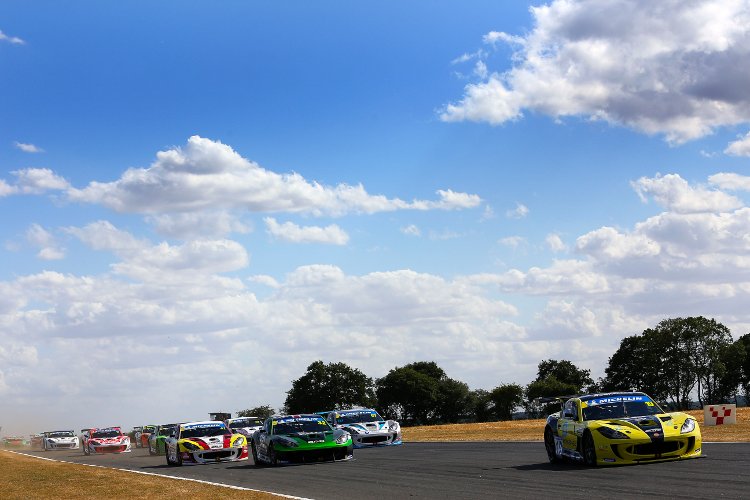 Harry King secured a sensational pair of victories in the Michelin Ginetta GT4 Supercup at Snetterton, while Charlie Ladell secured the other win to extend his lead atop the championship standings.

King topped the timesheets in qualifying by only by the narrowest of margins, with Ladell’s chief title rival Carl Boardley only 0.033s adrift, while Angus Fender continued his strong qualifying run in third.

It would be a dominant display from King in the opening race as the Elite Motorsport ace led from lights-to-flag for a six second success, while Ladell and Boardley fought it out behind.

After rising from fifth on the grid to second on the opening lap, Ladell would have to fend off race-long pressure from Boardley to take second place by just 0.101 seconds at the flag.

Reigning AM class champion Jac Constable produced a great drive to rise from eighth on the grid to fourth at the finish, while a last lap incident for Adam Shepherd dropped him out of fifth.

Fender took the position on the road, but was handed a time penalty for contact with Shepherd, which meant that Tom Roche and Reece Somerfield rounded out the top six ahead of Carl Shield, Shepherd and Fender.

After dry conditions for qualifying and race one, Sunday’s two races would take place on a wet circuit, which presented a new challenge for the teams and drivers.

King wasn’t phased however and after fending off a challenge from Boardley on lap one, he would once again streak clear for a commanding five second victory, his third of the season.

Another driver who relished the tricky conditions was Constable, who climbed from fourth to second position to match his best ever result in the series, while Roche grabbed third off Boardley close to the end.

Fender was fifth, while Adam Higgins took a great sixth place on his one-off return to the championship. An unfortunate retiree meanwhile was Andrew Gordon-Colebrooke following early drama.

Another to hit trouble was Charlie Ladell, who had an electrical issue and had to pit at the end of the opening lap, before a strong recovery saw him take eleventh overall at the flag.

The final race of the weekend would see tyres prove to be the deciding factor, with a rain shower at the start of the preceding race making it a gamble between wet and slick tyres.

From the reverse grid pole position, Boardley led the opening lap from the fast-starting King, Roche and Fender, though a mistake from the leader on lap two led to Roche grabbing the advantage.

By lap four the advantage turned to those on the slick tyres and Ladell stormed through from sixth into the race lead in just two laps, before holding the advantage to the finish for win six of the year.

From twelfth place at the end of lap one, Shepherd produced a superb drive to climb through to second at the finish, while Higgins capped off a remarkable return with a maiden Supercup podium.

Another to benefit was AM class contender Colin White who climbed through to fourth, with Roche leading the early pace-setters in ffth ahead of King, Constable, Boardley and Fender.

While it was White who took the final AM class victory, it was Michael Crees who topped the two races before to extend his championship lead in his debut campaign.

White had led both the opening encounters however after superb starts got his ahead of poleman Crees, however race-long battles in each race would eventually be decided on the final laps.

Moves at Murrays and Agostini in races one and two respectively secured Crees his fifth and sixth class wins of the campaign, before he came a distant second to White in the final race.

Fellow title contender Jack Minshaw completed the podium in race one and looked set to do the same next time out before a spin dropped him back, with Lucky Khera then joining him in spinning out of the spot.

Lee Frost took advantage for his fifth third place finish of the campaign ahead of David Brooks, Minshaw and Khera, with Alexis Taylor an unfortunate retiree after finishing fourth in race one.

White was the only one of the AM class contenders to risk slick tyres in the final race, and as he romped to victory ahead of Crees, it was Minshaw who completed the class podium.

The weekend’s results have left Ladell with a 20 point lead over Boardley atop the standings, while White has jumped Minshaw in the AM points as they pursue leader Crees.

The Michelin Ginetta GT4 Supercup is next in action at Rockingham on 11/12 August.