Bakkerud suffers a Setback in Canada

Andreas Bakkerud has been the point man at EKS Audi Sport in the pursuit of Championship leader Johan Kristoffersson. With a string of podium finished to his name, Bakkerud was hoping to repeat that feat in Canada.

However, the 2018 World RX of Canada seemed to live up to the reputation of it previous editions and threw a spanner in the works of proceedings. Bakkerud showed good pace after testing in Latvia over the mid-season break and finished Saturday’s action in sixth place overall behind team-mate Mattias Ekstrom. 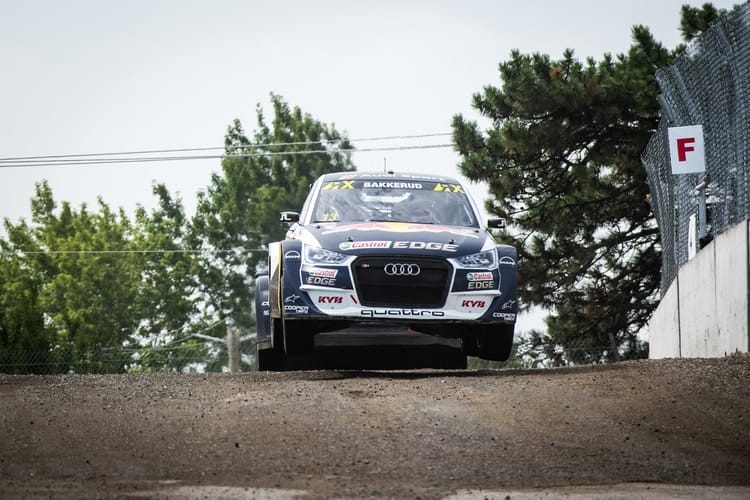 This performance put the EKS Audi Sport driver into Semi-Two where his luck changed, however his courage to continue was to be commended. Despite leading the six car field off the line, the Norwegian driver had contact from Sebastien Loeb in the rear of the Audi and this broke the rear suspension.

“Unfortunately, Sebastien Loeb touched the rear of my car which resulted in damage to a suspension component,” said Bakkerud.

“I was leading the Semi-Final, but unfortunately we got some technical issues and didn’t get trough to the finals. Chin up, next race we’ll strike back!”

With the improved performance of the Team Peugeot Total drivers of Loeb and Timmy Hansen seeing them finish second and third in Canada, Bakkerud drops to joint fourth place in the Drivers Championship where he is tied on points along with fellow countryman Petter Solberg.

Round eight of the 2018 FIA World Rallycross Championship takes place at the the “Temple of Rallycross” known as Loheac. With six points separating five drivers for second place, Bakkerud will be pushing hard to add to that podium tally and move back up the order.

Abbring switches to World RX for 2020