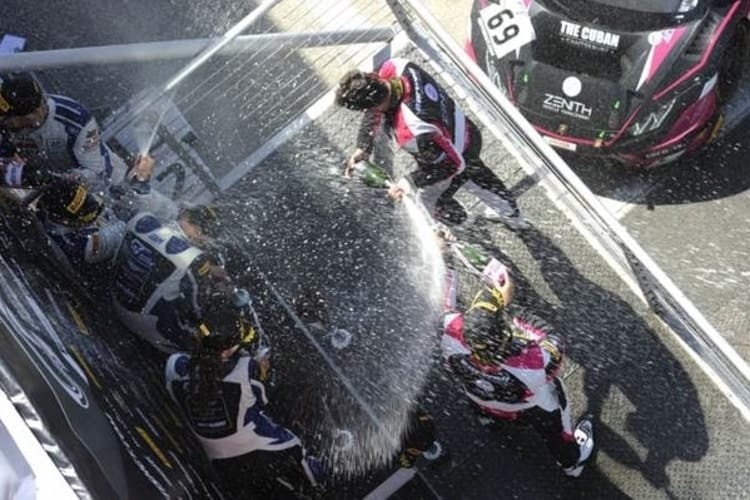 The Lamborghini Huracan GT3 entry came within 5-minutes of winning the two-hour encounter around the Brands Hatch GP track, with Cocker leading the race since the half-way pit stops. However, due to rear end damage sustained, the number #69 was suffering from badly worn left-rear tyre and was becoming increasingly hard to control.

But with only 3-laps remaining, Cocker suffered a big slide exiting the Westfield left-hander, which allowed the Optimum Motorsport Aston Martin V12 Vantage GT3 of Jonny Adam to slip past him as they blasted up hill to Dingle Dell, which demoted the Lamborghini to second position.

Despite this, this was a great result for the duo of De Haan and former British GT Champion, Cocker.

Meanwhile, Barwell Motorsport team-mates, Jon Minshaw and Phil Keen, were in contention for a podium finish until a cruel twist of fate denied them a strong finish. This was with a large piece of debris from another car becoming lodged in the water radiator housing of the Huracan, thus blocking the airflow. This very quickly meant the engine became overheated, resulting in the car being forced to retire from the race. But with less than 20-minutes to go in the race, the former championship leaders were classified eighth in GT3 in an attrition-filled event.

So heading to Donington Park, the number #33 Barwell Motorsport car still have a chance to claim the drivers championship crown despite the difficulties they suffered at Brands Hatch.