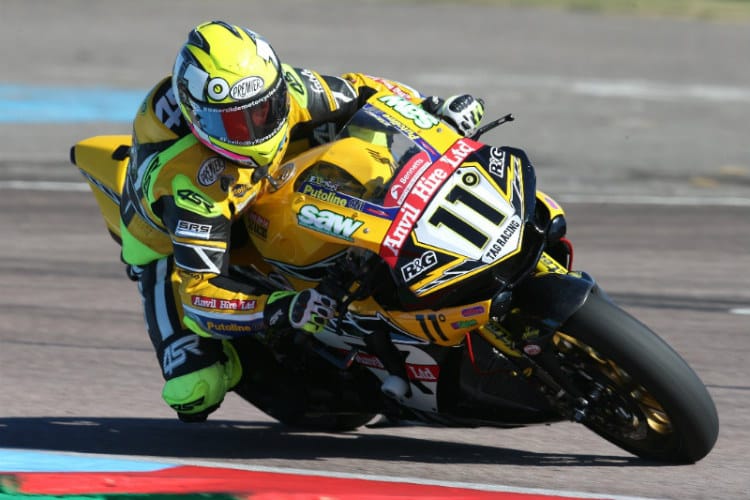 It turned out to be another frustrating weekend for James Ellison at Thruxton as he suffered from rear grip and feel problems throughout the race meeting.

The Anvil Hire TAG Racing rider started to struggle with rear grip in the second part of qualifying and missed the cut for Q3, leaving him down in 16th on the grid for the opening race.

Ellison made a positive start to race one and had fought his way up into 13th as he entered the final two laps. He would battle with Christian Iddon for 12th and made his move on the final lap.

Ellison started race two from ninth on the grid, but was forced wide in the aftermath of Chrissy Rouse’s crash at turn four, forcing him to re-join the race down in 21st place.

The Cumbrian fought his way back up into 15th by half-race distance and had his sights set on Bradley Ray before he began to lose grip with his softer SC0 rear tyre once more – forcing him to settle for a point.

Reflecting on another tough weekend, a frustrated Ellison commented:

“It’s been a frustrating weekend, again we seem to have no luck at all! Friday we had an electrical issue which set us back, and we were still battling rear grip. Everything we tried just didn’t seem to work, I could get to a good lap time, but then I couldn’t seem to better it, even on fresh rubber. The track tempertaure was high which didn’t help matters, but it was the same for everyone. We’re still pushing 100% and we’re continuing to work as hard as possible to find a break through.

“In both races today I struggled with rear grip and feel, and getting caught up in the crash in race two and being hit on to the grass didn’t help. I pushed as hard as possible but it just didn’t happen today, the team and I shouldn’t be where we are, it’s disappointing but i believe we will get there. We have to put this weekend behind us and focus on Cadwell, where I want to be back on the podium.”

The tough weekend leaves Ellison 13th in the championship standings, 51 points behind the top six showdown places. Team owner, Rob Winfield, admits that the team need to make some improvements in the next two weeks. He said:

“I don’t know how I feel at this minute to be honest, James has struggled with rear grip all weekend which isn’t what we expected when we came here. The weather has played it’s part because of the high track temperatures, but it’s been the same for everyone else so we can’t complain at that. We have to go back to the drawing board again and forge a plan for Cadwell because we need to get back to winning ways there.”

The next round of the 2018 Bennetts British Superbike Championship takes place at Cadwell Park in two weeks time.