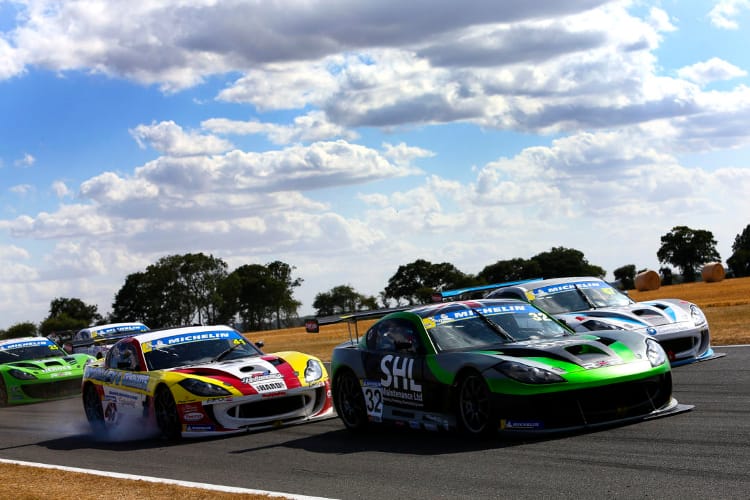 We’re starting to move into the business end of the 2018 Michelin Ginetta GT4 Supercup season, with Charlie Ladell the man to beat at the top of the championship standings heading into the remaining three meetings of the season.

Ladell heads into this weekend’s three races at Rockingham Motor Speedway with a twenty point advantage over Carl Boardley in a two-horse race for the title, having extended his advantage with victory last time out at Snetterton.

The Rob Boston Racing ace took his sixth win of the season so far in the final race, though did see his 100% podium run for the season so far come to an end in race two, leaving him one shy of Tom Wrigley’s record start to a season.

Boardley meanwhile featured only once on the podium in Norfolk as he reached his landmark 100th race in the championship, but his eleventh rostrum of the year has kept him firmly in contention at the top with his own Carl Boardley Motorsport outfit.

The star of the show at Snetterton was Elite Motorsport’s Harry King, who kicked off the second half of his maiden Supercup campaign in style with a brilliant pair of race victories that have moved him three points shy of third in the points.

The driver occupying that position at present is Tom Roche, who took a third podium finish of the year as he joined King in being the only drivers to impressively finish all three races in the top five at Snetterton in changeable conditions.

The combination of wet and dry races would lead to some standout results for other drivers, with Jac Constable starring in race two as he stormed to second place, making it two podium finishes in two meetings to move him into the championship top five.

Adam Higgins meanwhile made a superb return to the Supercup as he benefitted from a dry/wet tyre conundrum in race three to secure a first podium in the series in third, though sadly he won’t be able to build on that as it was a one-off outing.

One place ahead of him in that race was Adam Shepherd, who is on a fantastic run of form with four podium finishes in the last six races he’s contested, putting the Rob Boston Racing star as a firm contender for a maiden win in the near future.

Angus Fender has been a star in qualifying so far, finishing in the top three in four of the five sessions so far and he’s keen to add to his two podiums so far, while Andrew Gordon-Colebrooke has the speed for the podium and just needs some luck on his side.

Carl Shield had his toughest weekend of the season to date at Snetterton, but will be eager to bounce back and return to podium contention at Rockingham, while Reece Somerfield is always a threat having finished in the top five on four occasions so far.

In the AM class, Michael Crees extended his advantage at the top of the standings with a stellar weekend in Norfolk, with two victories and a second place finish continuing the Century Motorsport man’s fantastic second ever season in car-racing.

Crees had to work hard for his successes though as he battled fiercely with Colin White in both races, eventually grabbing the wins on the last lap of each encounter, though the experienced White hit back with victory in the final race.

That has given White some breathing space in second in the points, with Jack Minshaw still a clear third though as he picked up his ninth and tenth podium finishes of the campaign to ensure he matches the tally of the points leader.

The only other driver to feature on the podium at Snetterton was Lee Frost, who has now finished in third place on five occasions this year as he continues a great fight with Alexis Taylor over fourth in the points, the latter also a five-time visitor to the podium so far.

Two more drivers are in contention for fourth place in the standings though with seventeen points separating four drivers, those being David Brooks, a class-winner prior to the summer break at Croft, and Frost’s Butler Motorsport team-mate Lucky Khera.

The Michelin Ginetta GT4 Supercup field will tackle qualifying and the opening race this Saturday, before races two and three following on the Sunday, the last of which will be televised live on ITV4 from around 3pm.

Full championship standings ahead of the weekend can be found here: https://www.tsl-timing.com/file/?f=TOCA/2018/183003ptsg50.pdf