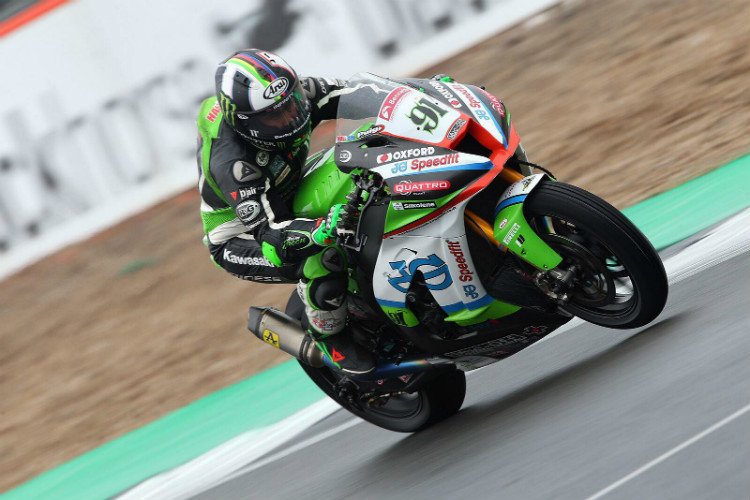 Leon Haslam has extended his championship lead after taking victory in an enthralling opening race of the weekend at Silverstone.

Haslam was involved in a four-way battle for the lead, which also involved Glenn Irwin, Tarran Mackenzie and Josh Brookes. It was really tight coming into the final few corners, but it was Haslam who managed to get the power down coming out of the final turn.

He was joined on the podium by Irwin and Mackenzie, with the latter celebrating his maiden podium in the Bennetts British Superbike Championship.

Brookes was forced to settle for fourth, with Jake Dixon coming home in fifth despite leading the race in the early stages. Jason O’Halloran was next in sixth, ahead of Luke Mossey and Peter Hickman. Eighth place for Hickman means that he has extended his lead over Danny Buchan in the battle for the final showdown spot.

Gino Rea took his best result of the season in ninth, with Tommy Bridewell completing the top 10. Christian Iddon took 15th and one championship point, despite racing with a broken collarbone.

Pole-sitter, Bradley Ray, was given the black and orange flag early on after crashing at Becketts, which meant that he had to return to the pits and retire.

At the start of the race, Ray got off to a fantastic start and held the lead going through Copse. Brookes also made a strong start and moved up into third, from fifth on the grid. Meanwhile, Mackenzie slipped down to seventh after a slow getaway from fourth.

After a steady opening few laps, disaster would strike for the race leader. Ray went down at Becketts and rejoined the circuit, however this is not allowed in the British Superbike Championship and he was consequentially given the black and orange flag.

Ray’s departure allowed Dixon to take the lead, with Brookes right behind him in second. The Australian took the lead at Brooklands, by going down the inside of Dixon.

The top six were running very closely and had pulled away from the rest of the field. On lap nine, Mackenzie moved up into fourth after going down the inside of Haslam into Copse. On the same lap, Mackenzie would also get the better of Irwin at Brooklands and now found himself in a podium position.

After holding station for a couple of laps, Mackenzie managed to take second away from Dixon as the pair went into Copse. The 22-year-old now had his sights firmly set on his teammate at the front.

The McAMS Yamaha duo took different lines going through Brooklands and Mackenzie took a slight peak on a couple of occasions. Behind them, Irwin moved up into third at the same corner.

On lap 15, Mackenzie finally made his move and took the lead of the race at Brooklands. Further down the order, Richard Cooper crashed out after a collision with Bridewell – an incident which is under investigation.

Back at the front, Irwin and Haslam had both moved ahead of Brookes and were now engaged in their own battle. There was another retirement on lap 18, as James Ellison lost the front going through Brooklands.

As the race entered the final nine laps, Irwin and Haslam had both caught Mackenzie. Irwin tried an audacious move on Mackenzie going through Maggotts, but couldn’t hold it.

On lap 23, Irwin would take the lead at Copse, only to run wide and allow Mackenzie back through. Irwin re-gained the lead at Brooklands on the following lap, but Mackenzie would fight back once more – returning the favour on the next lap.

Irwin got great drive coming out of Copse to take the lead once more through Maggotts on lap 26. Haslam then put an unbelievable move on Mackenzie through Brooklands and Luffield, going around the outside of the Yamaha man at Brooklands.

Haslam took the lead away from Irwin on the penultimate lap, only for Irwin to fight back in the middle of the circuit. Behind them, Brookes managed to re-take third from his teammate.

Onto the final lap, and Mackenzie made his move on Brookes going through Copse. A resurgent Dixon then tried to overtake Brookes at Maggotts for fourth, but went wide. Brookes and Irwin were then side-by-side as the pair tried to close down Haslam.

Despite their best efforts, the championship leader was able to pull away coming out of the final turn and take another victory.