INTERVIEW: Sam Bird on the future of motorsport 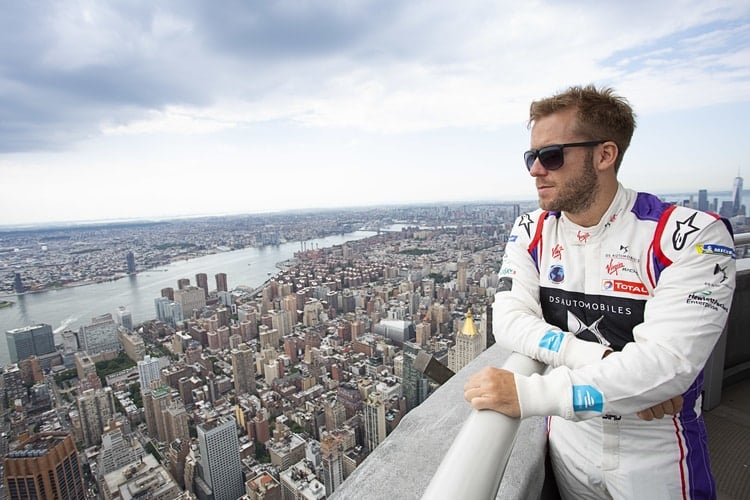 Bird, along with Lucas Di Grassi, are the only two drivers to have won in all four seasons of Formula E. And while Di Grassi has had the machinery to match his talents more often than not, Bird has had to struggle on with inferior machinery, proving himself to be one of the quickest and pluckiest guys in the paddock throughout his four seasons in the all-electric racing series. He showed himself from his epic win at Buenos Aires in season two to a charging drive in Mexico City the following season, showing himself to be quite the racer in Formula E.

But ahead of the 2018-19 ABB FIA Formula E Championship, beginning on 15 December in Riyadh, The Checkered Flag caught up Sam Bird to ask him about Season Four and how where he thinks the direction of the sport will go next.

The Checkered Flag- “Reflecting on Season 4 as a whole, how would you describe your performance?”

Sam Bird- “Following testing last year, we were aware that we didn’t have the fastest car out on track, we’d run the numbers and were expecting to hit a few podiums throughout the year but not to be winning lots of races. However, the team has massively over exceeded expectations; to be in the title fight down to the final race is an absolutely amazing achievement and I am so proud of what the team were able to do.”

TCF- “As a long-standing supporter of the series since its insurrection, are you surprised with how it has grown since 2014?”

SB- “The sport has grown massively since the first season in 2014; on social and TV the viewing figures are huge and growing year on year. We race in city centre circuits in some incredible locations and you can see how much the fans enjoy the sport – it’s so accessible, with FanBoost and a large amount of driver interaction, that the series continues to grow rapidly.”

TCF- “What is your favourite thing about Formula E?”

SB- “My favourite thing about Formula E is the racing – I’ve never had to do say many different jobs before whilst driving. I’m managing my energy consumption, regeneration and battery temperature all whilst talking to my race engineer and ultimately whilst I’m racing. But that adds to the excitement, when you can get all the different elements locked in the drive is incredible.”

TCF- “Heading into Season 5, what are your thoughts regarding the series evolution from Season 4 to Season 5? Nature of cars? Race format? etc.”

SB- “The second generation of Formula E cars is a testament to the sport and the evolution of the technology. In four short years the battery technology within the cars has doubled; the shear data we harness in FE allows manufacturers to apply to technologies quickly to road cars. I’m excited for the second generation of FE cars and I can’t wait to begin racing again in Season 5.”

TCF- “What do you make of the current crop of Formula E races on the calendar? What is your favourite on the Season 5 schedule?”

SB- “We travel to such a diverse range of cities across the season and being able to race in the heart of those cities makes it all the more special. Rome has to be a personal favourite for me; winning the first ever race their makes it particularly special. And of course New York City has to be a favourite, despite the changes to the track for Season 4, I’m not sure anything can beat getting the double win in front of the boss, Sir Richard Branson!”

TCF- “Are you hopeful that Formula E will have a race in the UK in the near future? Do you think Birmingham is a more likely candidate than London to host a race?”

SB- “Of course I’d love a home race again, winning in London has to be one of the highlights of my career so to have the opportunity to do this again would be fantastic. In terms of location, that’s really up to Formula E to decide but I think any location in the UK, where we can bring racing back to our huge fanbase here, would be fantastic.”

TCF- “Are you any closer to announcing your future for Season 5?”

SB- “I’ve been lucky enough to be successful in Formula E for 4 amazing seasons, racing in incredible cities across the world, I fully hope to be continuing this next season. We’re currently in the summer break but as we get closer to pre-season testing I’m sure certain that we’ll see announcements up and down the paddock.”

TCF- “Do you think there will be a point within your lifetime where Formula E overtakes Formula 1 as being the pinnacle of motorsport?”

SB- “Absolutely, as Formula E continues to grow on a global scale you can see the decline of Formula 1 with certain audiences. As the need for EVs continues to grow the relevance of FE is only going to heighten, we’re racing in a championship with some of the best manufacturers in the world competing against each other and that only seems to be growing. Formula 1 are moving towards paid platforms whereas FE have a huge range of fan-friendly content – I think this allows fans to feel more involved and is contributing to the huge growth that the Championship has seen in the last four years.”

TCF- “Audi seemed to have the best power-train last season, do you think should Virgin Racing become an Audi customer team next season that you can do a Techeetah on Audi and outfox the works team?”

SB- “From Season Five onwards, the Virgin team will operate independently – this means that they can choose a manufacturer to supply their cars. There are a number of competitive packages to choose from and no-doubt Virgin have weighed up the benefits of each of these – I’m sure we’ll see in time which path they have decided to go down.”

TCF- “Apart from yourself, who is the toughest competitor in the series and why?”

SB- “Every single driver in Formula E has proved that they are strong, I’m racing against 19 world class drivers each time I step into the car! We’ve got drivers that have competed in different championships across the world and that adds to the excitement on race day.”

By Paul Hensby
1 Mins read
Both Sébastien Buemi and Oliver Rowland have been disqualified from the first race of the London E-Prix weekend.
Formula E