Interview: Tom Chilton talking about the Independent crown and the Silverstone weekend

Tom Chilton became the record breaking fourteenth different winner in the 2018 Dunlop MSA British Touring Car Championship as he crossed the line in his Team Shredded Wheat Racing with Gallagher Ford Focus RS to take victory in the final race of the day at Knockhill.

Not only was it the first victory for an RS branded Ford since the early nineties, it was also Tom’s first victory in the championship since his return to the BTCC last year after several seasons away racing in World Touring Cars.

This year and at this point of the season, Tom is an outsider in regards to the overall drivers championship. However, he has been fighting at the top of the independent drivers table where he currently lies just 5 points off the lead in second. The possibility of a back to back World and British independent touring car crown is strong.

The Checkered Flag caught up with Tom to ask him about his victory at Knockhill last time out and also how he feels this weekend’s three rounds at Silverstone will go.

The Checkered Flag – “You scored victory last time out at Knockhill, how much of a relief was it to finally reach the top step in 2018?”

Tom Chilton – “It was a great, great feeling to be honest. I’ve finished second and third this year and I kept missing out on first but we finally clinched it in the wet conditions of Knockhill.

“It was all down to getting the luck at the reverse grid, getting a cracking start and people know when I’m out at the front that’s it, I usually just disappear into the distance. I didn’t disappear because Colin Turkington was closing in on me the second half of the race with my wet tyres going off and the circuit drying a little bit. Colin fought as hard as he could from behind but luckily he couldn’t get past.”

TCF – “I imagine you were trying to make up for what happened at Rockingham as well.”

TC – “Yeah, I mean I always go absolutely flat out when I’m at the front because I want to pull away from everybody. It was my first time on the hard tyre because we only get an out and in lap to take the top off them in free practice.

“In my heart I was more confident as we had three green flag laps because of the propshaft failure on Ricky Collard’s BMW and I was thinking, ‘well the tyres have got a decent temperature now’.

“After I got a start from the Gods with no wheel spin and pulled out a few metres on Matt Simpson, I was thinking, ‘I’ve got such a good start, I’ve clearly got front grip.’ I’ve gone flat out, sixth gear through turn one. The car didn’t want to understeer or oversteer.

“The ground wasn’t 100% dry, but I thought I could brake at my normal point [for turn 2] and the car didn’t want to stop because the hard tyre had a lot less grip than I was anticipating.

“The drift wasn’t the problem, I could keep the car on the black stuff. The problem was that Matt Simpson hit me very hard which broke my front left steering. That’s what really killed me.”

It was going oh so well until the next corner. Credit: btcc.net

TC – “I was very upset, it was a mistake which was my fault so when I was sitting on the front row again at Knockhill. I was like, I’m gonna get another good start and I’m not gonna make a mistake and that was it.”

TCF – “You’re currently sixth in the drivers championship, sixty-five points behind Colin Turkington, therefore it’s still not over for you yet in regards to overall honours.”

TC – “It’s not at all. It’s so competitive and so close the British Touring Car Championship that anything can happen.

“I spoke to Colin Turkington on Sunday at the Goodwood Revival actually and I said to him you can probably smoke a cigar, put your feet up I think you’ve won it whatever happens and his wife was like ‘No! no! no! no! haha. It was very funny.

“But at the end of the day, if he was taken out at race one at Silverstone and race one at Brands Hatch to lose the championship, in British Touring Cars this is something that could very easily happen.

TC – “For me where I am, one point off fifth and only a handful of points off fourth I very much think that third in the championship is very, very doable. But, I think if I’m very lucky I can clinch second.

“Obviously my goal is to get second place and beat Tom Ingram so I can win the independents that I’m currently second in. But, either way if I could get third overall I’d be over the moon.

“I finished third overall in the FIA World Touring Cars last year so if I don’t finish third in Britain they have beaten the third best touring car driver in the world haha.”

TCF – “That was going to be my follow up question about the independent championship, to win the World Touring Car independent trophy one year then the BTCC independent the next that sounds like it would mean quite a lot to you.”

TC – “It would mean a lot to me because I haven’t won the independent championship in Britain since 2010 and it was great winning the world last year and if I can follow on to win the British again the year after it would be very good for me.

“Last year I got that beautiful FIA blue globe with a carbon fibre base and chrome wings, that sits pride of place on my mantelpiece so I’d love to get another British Touring Car winning trophy next to it. It’ll mean so much.”

TCF – “Correct me if I’m wrong, but would you be the only driver to have ever won a World Touring and British Touring independent trophy back to back?”

TC – “Hmmm, the only person who was close to that is James Nash. James won the British Touring Cars’ in a Vauxhall Vectra in 2011 but then he was in the 2012 World Touring Cars and didn’t do too well. But the year after I think he won the independent world championship.

“I wasn’t allowed to be in the independent championship because I was at RML with Yvan Muller. They wouldn’t let me enter it which was really frustrating.” 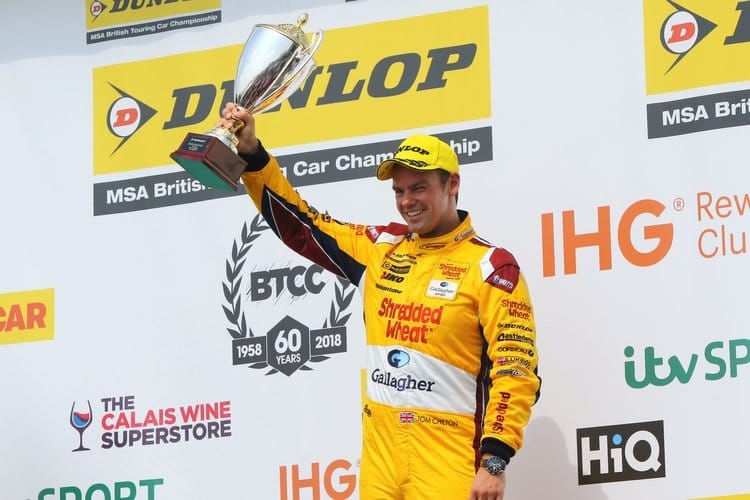 TCF – “You missed out on Silverstone last year on your BTCC return, how does it feel returning to this circuit in 2018?”

TC – “It’s a great circuit, I love it to bits. Last year I had to have a gallbladder operation and they said I couldn’t race for four weeks after. Originally they told me two weeks so I thought ‘great, I can do Silverstone’ but then I spoke to the doctors and they said no, four weeks.

“I put Rob Huff in my car [last year] and he did a great job. But, this year it’s going to be nice driving a British Touring Car around Silverstone. The last time I actually raced there I won, a bit like when I was last at Knockhill in a Ford Focus I won and I did it again this time. So I’m hoping that bodes well.”

TCF – “How do you feel the Focus RS will fare around Silverstone?”

TC – “I think the car itself is very competitive. We are a hatchback which doesn’t make us the best shape but the car’s got a very good platform. You only accelerate hard twice a lap but if I’m honest it’s really gonna suit us.

“We might have to change the setup a bit depending on the day, but I think the experience between everyone in the team; me, Sam Tordoff, James Cole and all of our engineers, I think we’ll be able to get a good car together for it and I’m thinking very positive for this weekend.

By Michael Callander
6 Mins read
Bart Horsten is in his second season in British F3, and has his eyes on a push up the table starting this weekend at Donington Park. Hitech’s Australian driver spoke to TCF about his ambitions for the season.
BTCC

By Samuel Gill
2 Mins read
Adam Morgan has claimed his first win of the 2021 BTCC season and the first in Car Gods with Ciceley Motorsport’s new BMW 330i M Sport ahead of Jack Goff and Aiden Moffat.