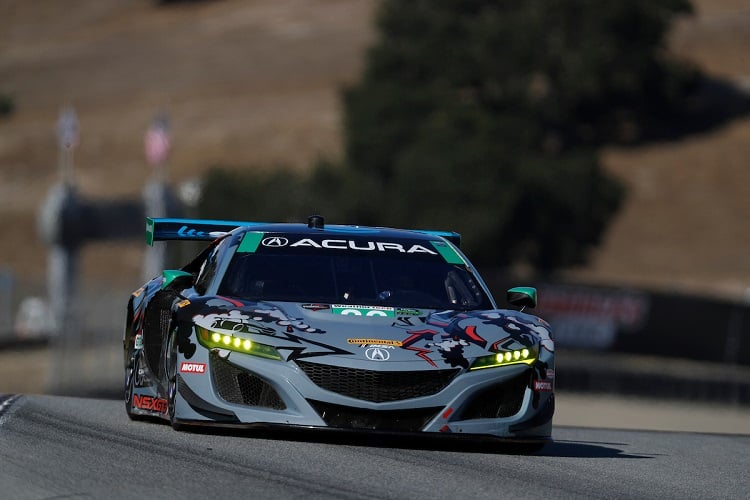 Katherine Legge and Alvaro Parente took a well-deserved victory in the Continental Monterey Grand Prix on Sunday, with the Meyer Shank Racing duo coming out on top of another hard-fought GT Daytona battle at Laguna Seca.

Legge put the car on pole position but found herself shuffled down to fourth at the start, however the British racer drove strongly and conserved life in her tyres, and it ensured the duo were able to push harder later in the race that paid dividends when it mattered.

“I felt like a few of the guys jumped the start, so that put us back a few positions at the restart,” said Legge. “It was kind of good in a way because I was watching them burn their rear tyres and I knew that if I was just patient that they would come to me and it did.

“We had an awesome car, I looked after the tyres and I kept my head down to get the job done. The fact that we went that far with the tyres in the first stint meant that we could go harder on the second two stints.”

Co-driver Parente felt the #86 crew deserved the victory at Laguna Seca and he praised the early work that Legge did before handing over to the Portuguese racer, with the win setting his team-mate up nicely for a charge for the Drivers’ title in the season finale at Road Atlanta for Petit Le Mans next month,

Legge sits just thirteen points behind Madison Snow and Bryan Sellers from Paul Miller Racing in the GT Daytona class, with Parente down in ninth after missing the races at Belle Isle and Virginia thanks to his other racing commitments.  The #86 car is also involved in the Teams’ Championship battle, with just six points separating it from the #48 car from Paul Miller Racing.

“Kat (Legge) did a great job, getting the pole and drove a great first stint,” said Parente. “I’m really proud of the entire team, this feels really good. We needed this win, and we really deserved it.

“We’ve worked so hard on the setup through practice and into the race. Thanks to Ryan, Mike and Acura. We had to get this win for the championship.”