Second Date For British GT at Donington In 2019

The British GT Championship will make two visits to Donington Park next season following confirmation of its 2019 calendar.

The Leicestershire venue fills the 22/23 June 2019 weekend initially set aside in the provisional calendar issued three months ago. However, the event’s exact race format remains under wraps for the time being while championship organisers, SRO Motorsports Group, discuss potential options with the track’s operators, MSV.

It’s the first time Donington will have hosted British GT outside of its traditional end-of-season slot since the championship staged a three-hour race there in 2011.

The recent but expected sale of Rockingham, which would ordinarily have retained its place on the calendar, left British GT without a suitable sixth venue in the UK. As such, and following discussions with several existing and new circuits, Donington was considered the strongest candidate to host two championship rounds in the same season.

British GT is now working on an event format that will differentiate its mid-season visit from the circuit’s traditional two-hour season finale on 14/15 September 2019.

“There were a lot of elements to consider, such as availability, date clashes and suitability, but Donington was always at the top of our wish list if we were required to visit the same circuit twice”, said Championship Manager, Benjamin Franassovici.

“It’s very popular with drivers but also has a pitlane big enough to accommodate refuelling, as would have been the case at Rockingham. However, it also offers the chance to try something different, and there are a few things we’ve been considering behind the scenes. We’re currently working with MSV to see which of these can be incorporated next season.” 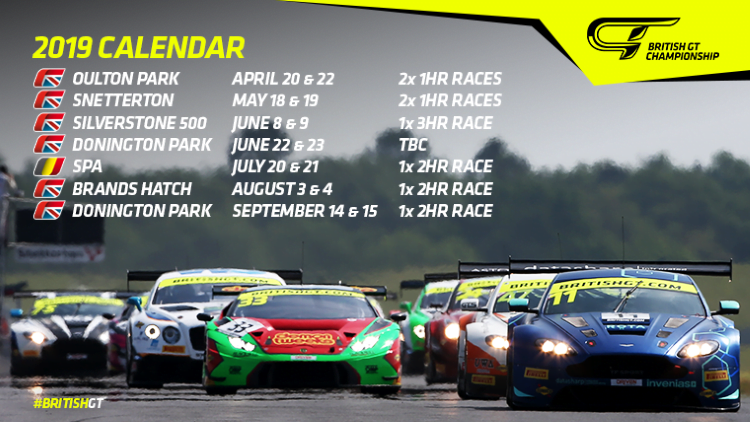 Donington hosts the final round of the 2018 campaign this weekend.