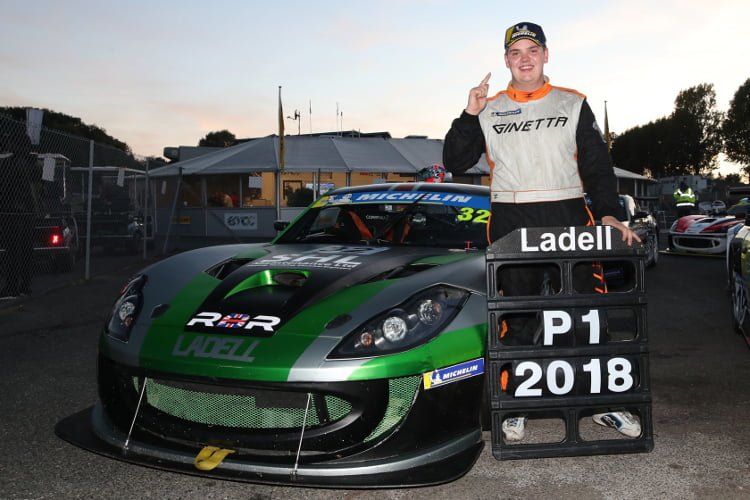 Supreme consistency and a near record setting win tally ensured Charlie Ladell overcame some tough competition to take a commanding title success with Rob Boston Racing in only his second season in the Michelin Ginetta GT4 Supercup.

Ladell headed into the season as an exciting prospect amidst a diverse entry list, with experienced contenders Carl Boardley and Reece Somerfield lining up against rising talents like Tom Roche, Harry King, Jac Constable and Angus Fender.

A regular top six finisher in his first GT racing campaign last year, former Clio Cup contender Ladell immediately took the step up to the front of the field this season and made a statement of intent with a pole position and a pair of victories on the opening weekend at Brands Hatch.

That kicked off a superb run of twelve consecutive podium finishes in the first half of the season, with Ladell’s remarkable front-running consistency being highlighted by the fact he didn’t run outside of the top three positions in the opening ten races.

Despite that impressive run, Ladell wasn’t able to build too much of a lead at the top of the standings as Boardley produced a similarly consistent first half of the year, with the duo split by just seven points atop the standings at the halfway point.

Boardley’s charge was aided by a sensational weekend at Croft, during which he became the first driver since Tom Wrigley in 2016 to win all three races in a weekend, however as the second half of the season unfolded he would slowly slip away from Ladell.

While the points leader recorded seven podium finishes in the next nine races, only three for Boardley meant that by the time the field headed into the season finale at Brands Hatch, it would take a miracle for the Team HARD man to emerge victorious.

Ladell didn’t give him a chance though as a superb display saw him convert pole position into a double victory to be crowned champion, with twenty podium finishes from the 22 races he contested easily beating the tallies of his two predecessors to the crown.

In fact, Ladell ended the campaign only one victory shy of the all-time Supercup record for wins in a season, with ten successes – five in each half of the campaign – being only one shy of joint record-holders Tom Sharp (2012) and Tom Ingram (2013).

Boardley meanwhile completed his most successful season in the championship so far as a clear vice-champion, with six race victories within a total of fourteen podium finishes in a campaign that also saw him reach 100 Supercup starts at Snetterton and make his BTCC debut at Knockhill.

‘Best of the rest’ outside the title contenders was the clear standout rookie driver in the field, King, who made the step up to the Supercup following two impressive seasons in Ginetta Juniors with Elite Motorsport, who stayed with him to make their series debut also.

A double podium finish on the opening weekend showed he was a front-runner from the off and a maiden pole position and victory came next time out at Donington Park, however some misfortune and incidents meant a title challenge wouldn’t develop for the teenage talent.

King continued to showcase his huge potential throughout though, only failing to finish on the podium in one of the eight meetings, with a stunning double victory at Snetterton and consistent podium finishes to end the year securing him a top three points finish.

Following some brilliant cameo’s in 2017, Roche mounted a first full campaign this year and had the pace to be a race win contender every weekend, however some incredibly bad luck meant he only ended the campaign with seven podium results.

Running with Rob Boston Racing, Roche notched a win at Donington Park and converted pole into victory at Rockingham, before ending his season on a high with success in the final race of the campaign to ensure he finished proceedings fourth in the points.

2015 champions Century Motorsport were once again a presence at the front of the field as Fender showed great pace in his debut campaign, with a particularly excellent qualifying record seeing him finish in the top three on six occasions and taking pole position at Croft.

Fender converted that into seven podium finishes, six of which were third place results, with an impressive end to the campaign seeing him take to the rostrum five times in the final eight races to indicate he could be a force to be reckoned with if he returns in 2019.

Completing the championship top six was Constable, who stepped up to the Pro class after a hugely impressive charge to the AM honours last year. A regular top six finisher, the Xentek Motorsport ace made his mark with mid-season podium breakthroughs at Croft and Snetterton.

In his third season of racing, Carl Shield made a superb start to his first Supercup campaign with twelve consecutive top ten finishes – a feat only matched by the top two – and while a podium didn’t go his way, he ended the year with a best finish of fourth in the Brands finale.

The privateer entrant, who continues to be the most-capped driver in the series with 167 starts, was once again in the thick of the top ten battles throughout and almost made a long-awaited return to the podium, finishing in fourth place on three occasions.

Shepherd had a nightmare start with a triple DNF in the opener, and while he would only go on to compete in four other meetings, he enjoyed a superb turnaround in form with podium finishes each time out, ending the campaign with a total of five to his name.

For Gordon-Colebrooke, it was a campaign that held much promise as he regularly got himself into the mix towards the front of the field but a podium finish never quite went his way; his highlights being second on the grid at Oulton and fourth overall at Rockingham.

The AM class meanwhile hosted a thrilling battle for top spot between championship stalwart Colin White, second year contender Jack Minshaw and exciting rookie Michael Crees, with the latter sensationally emerging victorious in only his second season of car-racing.

2017 GRDC+ champion Crees made a sensational debut at Brands Hatch in April as he took three class wins on the road, however the stewards took away two victories due to incidents on track, the start of a tricky start as he got to grips with the series.

Minshaw and White took advantage to take two wins apiece across the opening two meetings, and then David Brooks benefited from some Oulton Park drama to take his one and only victory of the campaign, with Crees coming into his own from Croft onwards.

A double win there moved him into the points lead, which he went on to hold for the remainder of the season as pairs of victories at Snetterton and Rockingham as well edged him clear, before he secured a much desired treble win for the first time at Silverstone.

That incredible run meant he headed into the season finale with the destiny of the title in his own hands, and a characteristically exciting run to three podium finishes secured him a fantastic title success, after concluding the season with fifteen consecutive podium finishes.

It was White who pushed Crees the closest to the finish and the duo enjoyed some brilliant battles on track through the year, however while White was an almost permanent presence on the podium, a run of ten races without a win cost him dear.

Minshaw meanwhile would be left playing catch-up after a couple of early retirements and he was left to settle for a distant third overall in the end, but with a final tally of sixteen podium finishes matched that of White, with them both being three shy of Crees.

The top three were far and away the class of the AM field, with Brook’s Oulton success making him the only other driver to take a win through the campaign, one of three podium finishes for him on his way to seventh in the final standings.

Two strong additions to the grid came in Butler Motorsport pair Lee Frost and Lucky Khera, who both took top five points finishes with five and three podium finishes respectively, with Alex Taylor splitting them in the standings courtesy of a half dozen rostrum visits himself.