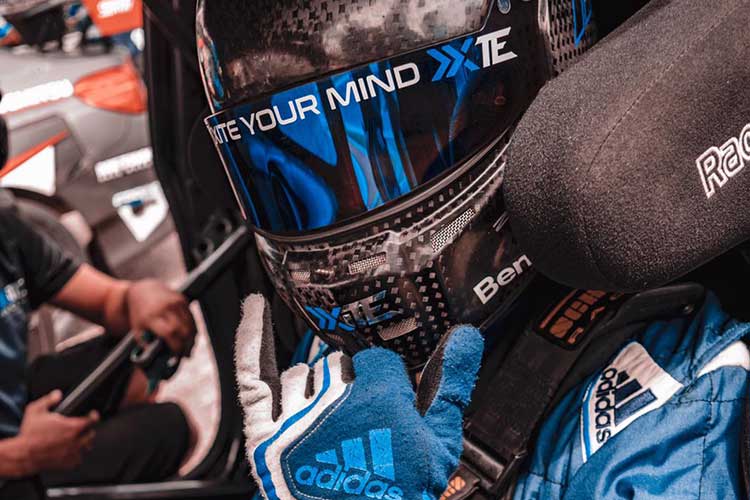 The Bristol-based driver has had a busy season, competing in World RX, Americas Rallycross and British Rallycross along with other appearances at various shows and events throughout the UK.

The 2018 Gymkhana GRiD finals mark the end of the season for Bennett and the Mini Cooper SX1 after its debut year which has seen much progress throughout the season, we caught up with Bennett as he prepares for his GRiD debut.

“Preparation has been part driving part media!” Bennett told The Checkered Flag. “We found a little excuse to do a Gymkhana test by setting up our own course resembling last years Gymkhana GRiD course while making it into a little edit!

“It was great fun, didn’t take too long to get used to it driving wise but I did do too many donuts on occasions!”

While the Mini Cooper SX1 will run pretty much to the same spec as the rallycross setup, there will be a few changes for this event. “Tires are changed for the rules, we have some road tyres that I have never used which should be interesting!

“Alongside that we probably alter camber, suspension and possible diff’s if we need to but mostly I’ll just be pulling the hand break and having fun!”

As mentioned Bennett has had a busy few months, and while he hasn’t had too much of a chance to prep for Gymkhana GRiD, he is confident he can get straight in to the swing of things.

“I haven’t yet done my homework! I have been focusing on the World RX homework for South Africa at the moment, but I think its a case of get there and learn fast! I can drive so let’s just master the directions!

“I have been known to not count to 4 in World RX laps…” he adds.

Gymkhana ready? We found out when the working day was over…What do you think Gymkhana Grid?

Gymkhana GRiD presents the perfect opportunity to end the season with some tyre shredding, Bennett is looking forward to rounding the year out in style.

“I really love chucking these super cars around and having fun with them which suits my driving style as well!

“Sometimes being precise to be fast takes the edge off what these cars can do from an entertainment side so it should be great fun!

While it is a bit of fun, there it is also a competition, we asked Bennett if he though he could bring home a trophy… “I would think so, the Mini looks perfect for these events… some tough competition and a lot to learn but I like things in the deep end! “

Gymkhana GRiD takes place at Carnival City in Johannesburg on 1 December, the event will be streamed in full via the website at GymkahanaGRiD.com.

By Ben Huntley
1 Mins read
The new all-electric era of WorldRX launched last night in Norway ahead of a thrilling weekend of motorsport in Hell.
FIA World Rallycross

By Ben Huntley
2 Mins read
After years of waiting, the electric era of the FIA World Rallycross Championship is finally ready to begin.