Burns takes Round 3 of the Ginetta GT4 Supercup 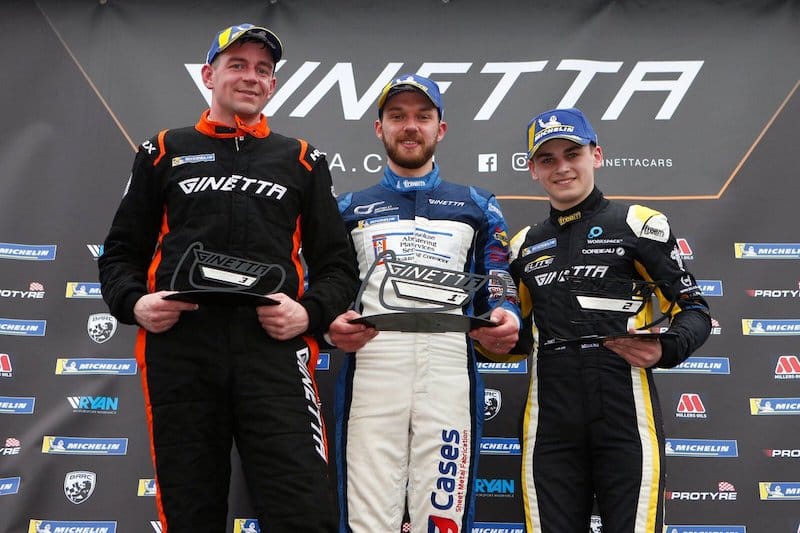 A partially reversed grid saw Will Burns on pole, for the final race of the Ginetta GT4 Supercup weekend, with Tom Hibbert alongside.

When the lights went out Burns got away cleanly, but Reece Somerfield dived down the inside at Paddock Hill bend to take second from Hibbert.

Hibbert continued to drop back and was in sixth place, when he tried to put a move on Carl Shield at Graham Hill Bend, sending Shield spinning on to the grass and down into last place. Hibbert retired shortly after with suspension damage and Shield finished his disappointing weekend in thirteenth overall.

A lap later Dan Kirby got it wrong going into Clearways and ploughed straight on into the wall, ending his race. Kirby happily walked away unscathed, but with the safety car out to recovery the battered Ginetta, Jack Oliphant also managed to damage his suspension, ending his weekend early.

At the restart Harry King made a lightning move on Somerfield, blasting up the inside at Paddock hill bend to take second spot, staying there for the remainder of the race finally finishing two seconds back from Burns.

The top three remained the same for the rest of the race, while Mike Epps and Fin Green had their own personal battle for fourth place, Epps’ experience showed holding off Green to take the place. Both collecting track limit warnings in the process.

Top Am class driver, Nathan Heathcote, progressed to sixth after the Shield incident, and remained there. The Am drive of the day though goes to Colin White, having started plum last after an off in round 2, he made his way up the field to finish second in class and seventh overall, setting the Am class fastest lap on the way.

Paul Taylor came home in fourteenth place, lucky to finish after connecting with Tom Barley on the penultimate lap, putting them both off the track and ending Barley’s race. The last finishers were Lee Frost and for the second time this weekend Peter Bassill brought up the rear.

Overall, a near perfect race for Rob Boston Racing‘s Will Burns, not only taking the win but setting the fastest lap on the way with a time of 48.179 seconds.

As the teams start looking ahead to Donington in a fortnight, the championship standings look like this:

Professional HGV driver and Photographer, trying to break into Motorsport Journalism. Interested in pretty much anything with 4 wheels.