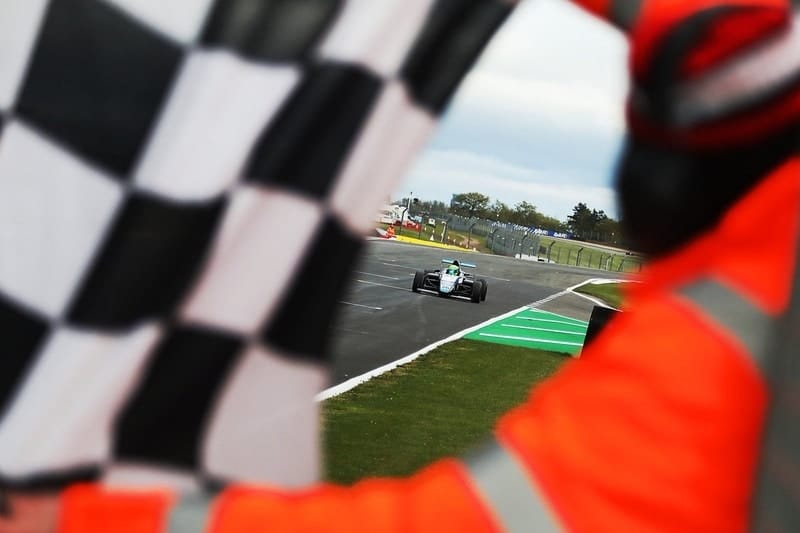 Louis Foster has rounded off the Donington Park weekend of the F4 British Championship certified by FIA – powered by Ford EcoBoost with victory in race three, to add his previous victory in race one.

The Brit converted his pole position start but there was drama aplenty with his Double R Racing team-mate Sebastian Alvarez taking the lead on the opening lap with the Richardson Racing car of Luke Browning also jumping Foster off the start-line.

Further back, a mistake at the final chicane brought a grizzly end to Tommy Foster‘s weekend as he slammed his Arden Motorsport machine into the barriers, necessitating a safety car.

The restart saw the top five separated by less than 1.5s, Josh Skelton taking full advantage to jump from fifth to third place whilst the Carlins of Joe Turney and Zane Maloney scrapped away behind, running side-by-side for much of an entire lap of the 1.97-mile circuit.

The battle up front continued until the very last lap, where Turney had brought himself in to contention with him, Louis Foster, Alvarez, Browning and JHR Developments‘ Skelton all dicing for the same piece of tarmac.

Ultimately, it ended in bitter circumstances for Turney as an unfortunate scrape with Foster broke his front-right suspension and saw the 17-year-old skid off in to the gravel trap at Redgate.

Skelton finished just 1.2s behind in fourth place with Alex Connor completing his debut weekend in the series with a fifth place spot.

Zane Maloney avoided contact with his team-mate and achieved sixth place with Carter Williams close behind in seventh.

Bart Horsten was unable to replicate his race two victory thanks to a pit-stop to repair damage behind the safety car meant he dropped to last place, however the Australian still recovered to an eighth place finish.

Mario Martinez avoided the trouble ahead of him to take a clean ninth place ahead of his Fortec team-mate Roberto Faria in 10th, who ran wide off the circuit with one lap to go.

Turney was classified twelfth despite not taking the chequered flag whilst Tommy Foster was the only non-classified runner.

Today’s result means Louis Foster extends his championship lead over Sebastian Alvarez to 17 points with Luke Browning a further 28 points behind the Mexican.