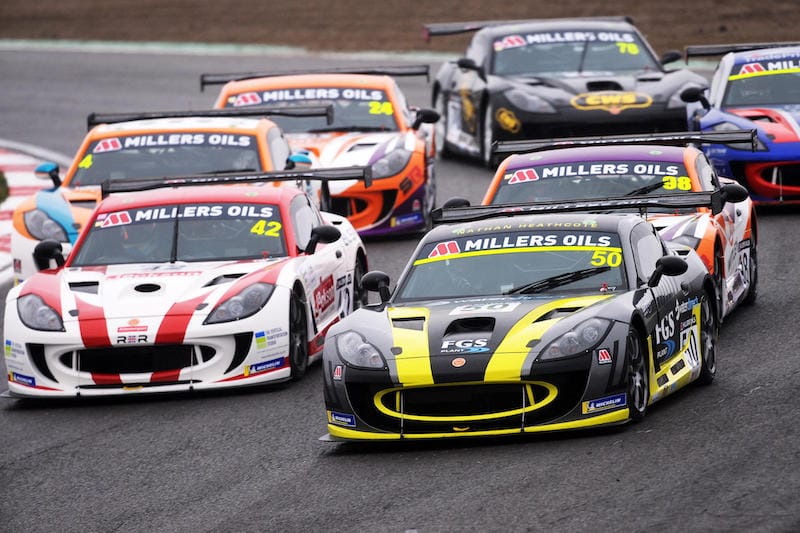 With the opening weekend at Brands Hatch out of the way, the Miller Oils Ginetta GT4 Supercup is heading to Donington Park, for the next instalment, this weekend.

In the Pro Class, Elite Motorsport’s Harry King leads the championship on 97 points, heading into this weekend, no doubt hoping to better his performance at Brands, which saw him take three podiums finishes, including a race win.

Hot on King’s heels is Privateer, Reece Somerfield, who also took three podium finishes, including a race win. Making it Somerfield’s best weekend in his six seasons in the Supercup.

Rob Boston Racing’s Will Burns also took a race win at Brands, setting his stall out early on, with the intention of besting his second place overall in 2016.

Team Hard’s Mike Epps, had a cracking debut, making the podium, as did Triple M Motorsport’s Tom Hibbert back for his third season.  Carl Shield, back with AK Motorsport, and has a point to prove after a frustrating opening weekend, which saw him in the gravel in race one and bringing up the rear after contact in race three.

Fin Green, is still settling in, for Total Control Racing, after a solid start he’ll be looking to build on.  Carlito Miracco, makes his Supercup debut this weekend, as a privateer. Graduating from the Ginetta GT5 challenge.

Meanwhile, Tom Barley will be missing from Team Hard’s line-up this weekend, out with a broken wrist. Also missing is Rob Boston Racing’s Simon Rudd, who is out on his stag do, returning from Croft in June.

In the Am class, it was the new boys that excelled at Brands. 2017 MSA British Rallycross Champion, Nathan Heathcote, was the shining light taking home two class wins for Century Motorsport.  While Team Hard’s Darron Lewis, also took a class win and a second overall in race one.

Also leaving Brands with silverware, were the RBR duo of James Kell and Dan Kirby both getting their Supercup career off to a great start. More trophies were handed to Century’s Jack Oliphant, Lee Frost and Declan Jones Racing. Supercup Veteran, Colin White of CWS Motorsport added to his trophy cabinet too.

Returning to the Supercup this weekend will be Chris Ingram, backed by Double overall champions HHC Motorsport. Ingram returns after a 2 years absence hoping to build on his 22 podiums finishes.

DJR’s Lucky Khera, comes to Donington, sitting fourth in the championship. Whilst debutants Paul Taylor, Peter Bassill and Carl Garnett are all looking to build on their solid start to the season.