What Happened in 2018 at Snetterton?

Round 4 of the 2018 championship season saw victory for TF Sport with the now retired V12 Aston Martin Vantage GT3. Mark Farmer and Nikki Thiim struggled in the first half of the race but a safety car during the pit window allowed the pair to recover and the Dane shot off to a commanding 5 second lead come the end of the race. Second place went to Jetstream Motorsport‘s Aston Martin with Barwell Motorsport taking third care of Phil Keen and Jon Minshaw.

Strong results for Beechdean Motorsport were knocked on the head early on by a radiator issue while Team Parker Racing‘s Bentley Continental GT3 of Rick Parfitt and Ryan Ratcliffe were hobbled by the tight Snetterton Pit lane.

For race two it was early fortune for TF Sport‘s Marco Sorenssen and Derek Johnston though the Am side of the pairing more than fought for his place on the top step of the podium in the second half of the race. The identically equipped Andrew Howard for Beechdean came good in the second portion of the competition, forcing the MSW boss to fight to the line to keep his winners trophy.

The #11 machine took the final podium spot after problems for many of their competitors. A mystery problem for the #7 Team Parker Racing Bentley and a spin for Parfitt in the reigning champion car took the Bentley’s out of contention. Flick Haigh for Optimum Motorsport looked strong in the second half of the race but was hampered by traffic and couldn’t get on the back of the TF Sport machine ahead.

For the first race in GT4 it was a storming start for Ben Tuck in the Century Motorsport BMW M4 GT4. When the #501 Tolman Motorsport McLaren was forced to pull over at Bombhole though all the good work was lost behind the 570S Safety Car. A shocking pit stop by the Century team contributed to a significant delay and the car fell to ninth place in the lower class.

It left the door open to a McLaren 1-2 with Tolman Motorsport’s Joe Osborne taking the win ahead of Charlie Fagg. Third place was taken by Academy Motorsport in the old, but by no means senile, Aston Martin V8 Vantage GT4.

For race two it was again a good start from the front, this time for the Academy Aston Martin which was troubled by a problematic McLaren. This time it was the Track-Club machine which took a spin at Agostini and prompted the Safety Car to take to the track again.

On the restart Jack Mitchell took quick advantage to move his Century Motorsport BMW in to first place. Redemption for the BMW shared by Ben Green and Ben Tuck was harder to come by though as a tangle with race one winner Joe Osborne sent the car to the back of the pack.

Come the pit stops it was all change again with Lewis Proctor in the lead for Tolman and the BMW with everything to prove in hot pursuit. A worthy win, or daylight robbery, was the result with a move in to Coram on the final lap sealing the win for Ben Tuck. A fine reward after the woes of the first race. Proctor crossed the line a near second with Academy Motorsport once again taking third with the Aston Martin. 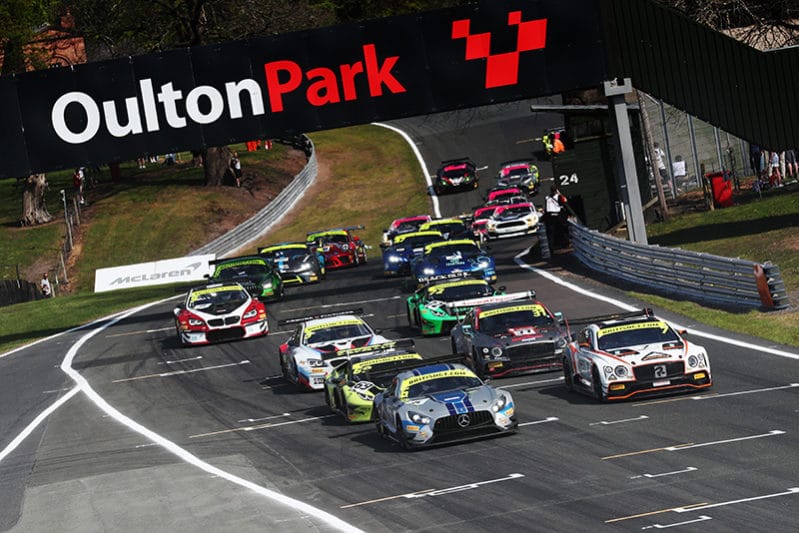 What Happened Last Time Out?

Round 1 of the championship saw victory for the re-united Bentley dream team of Rick Parfitt and Seb Morris. The pair were in the right place at the right time when a low percentage move from Ryan Ratcliffe in the Team Parker Racing Bentley GT3 took out the pole sitting Ram Racing Mercedes-AMG GT3 at Knickerbrook. The returning rocker claimed the third place spot from Barwell Motorsport’s Sam de Haan in a move at the start of the race and held out until the pit stops.

Morris took over at the halfway point and escaped pit road with a clear track ahead and the Phil Keen driven Barwell entry in his rear view mirror. A long range sparring match between the Lamborghini Squadra Corse driver and Bentley Motorsport pros saw the gap at 3.6 seconds come the flag.

GT4 was brand domination with the podium filled by McLaren 570S GT4 drivers. While Tolman Motorsport were hot tips for the win in the class it was actually HHC Motorsport, making their McLaren debut, who claimed the big trophy.

At the start it was a battle between the Ford Mustangs of Multimatic Motorsports which had locked out the front row but an early move by Dean MacDonald for HHC split the American machines. Jade Buford in the leading Mustang held off the chasing McLaren for all of his stint but come the stops it was the McLaren which held the lead. Two Tolman machines had also moved forward in the pits and the McLaren 1-2-3 was set. 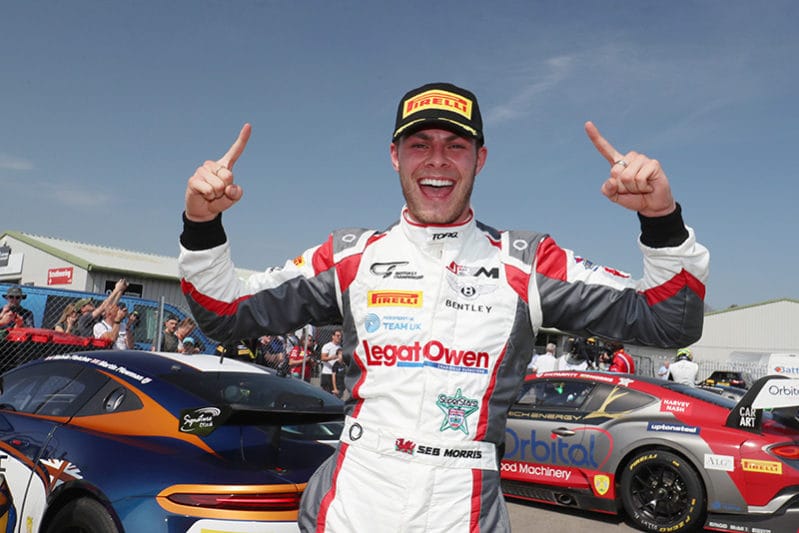 In race 2 Phil Keen weathered an early safety car period for a stranded GT4 Mercedes to hold a comfortable lead at the pit stops from the Team ABBA Mercedes-AMG GT3 of Adam Christodoulou. That comfortable lead wasn’t enough to overcome the seven seconds of success penalty in the pit lane for the cars performance in race 1 though and come the stops it was all change at the front.

Richard Neary took the lead in the Benz ahead of the Sam de Haan driven Lamborghini, the beneficiary of a nine-way fight for second place in the opening segment of the hour long encounter. Success penalties also made for a strong post-stop position for the Ram Racing Mercedes, third on the road after both the race 1 winning Bentley and the Phil Keen/Adam Balon Lamborghini served their time in the pit lane.

A second safety car, this time to recover Mark Farmer’s beached GT3 Aston Martin, compressed the gaps again with fifteen minutes left in the race. Neary fought off the charging Lamborghini but ran wide at Hislops with ten minutes to go. De Haan took the lead and fought a dogged defense of his position for the remaining race time, finally crossing the line with just two seconds from the Team ABBA machine. Third place went to Andrew Howard, sharing with Marco Sorensen for Beechdean.

GT4 looks on paper like a walk in the park for Seb Priaulx and Scott Maxwell. Seb took the start and led for the entire opening stint but come the pit stops it was change and work to do for the American driver. Again it was success penalties and also the 14 seconds of additional pit lane time used to balance all silver crews which shuffled the order and Maxwell emerged from the pits, behind the safety car and both Scott Maxwell’s Team Parker Racing Mercedes and the Invictus Games Racing Jaguar of Steve McCulley.

Despite being Am drivers against a silver ranked pro, both McCulley and Malvern did exceptionally well but there was no answer for the pace of Maxwell, in the car that broke the GT4 lap record in qualifying, who went on in the race to claim the Mustang’s first victory on British soil.

Graham Johnson in the Balfe Motorsport McLaren took second place, harassing Maxwell to the line with Beechdean’s Kelvin Fletcher similarly in hot pursuit. A final lap contact span the Aston Martin out of contention and granted the final podium spot to the Jaguar of McCully. Not bad for a team using 2019 as a season of reliability testing, rather than a full blown assault on the GT4 title.

WHATS NEW FOR THE SNETTERTON ROUND?

Big news comes in the form of driver changes, car withdrawals and new machines in GT4.

GT3 will see Tom Gamble join Century Motorsport in the #9 car with Jack Mitchell. The former BRDC British Formula 3 Championship racer is stepping in for the injured Adrian Willmott with no word from the team yet on when we can expect the Am driver to return. The change puts the #9 BMW M6 GT3 into the Silver Cup class and effectively relinquishes any hope of a victory in either Pro/Am or Silver Cup title races, but keeps Mitchell in with a chance at the overall GT3 crown.

For similar reasons Ram Racing have not made the journey from their Silverstone base to Norfolk. Ian Loggie, the Am in the Mercedes-AMG GT3, was injured in a cycling accident and will not be able to race due to broken bones. He, and the team, are expected to return for the blue riband event in the British GT calendar, the Silverstone 500 in early June.

G-Cat Racing are still unable to bring the Porsche 991 911 GT3 R promised at the start of the season. There is no official word on why the team and car are not able to race, only that it is due to events beyond their control. SRO are briefing that the car will, barring further unforeseen circumstances, be able to make its debut at Silverstone in three weeks time.

Finally for GT3, there is good news. As previously reported WPI Motorsport have taken the sound decision to step up, once again bringing the GTC class’ participation in British GT to a close. In place of the Porsche 911 Cup car raced at Oulton Park, the team have acquired a Lamborghini Huracan GT3 EVO and will now race for the top class honors in the East Anglian event.

In GT4 there are two new cars to whet the appetite. Fans of Stuttgart’s most famous export do not need to worry as GT Marques have now arrived with their Porsche 718 Cayman Clubsport GT4. The #88 car makes its debut with Chris Carr and Dino Zamparelli at the wheel.

Likewise, a new car has arrived for Stellar Motorsport, who last year ran two Toyota GT86 GT4 machines. The team have stepped down to a single entry for 2019 but stepped up in terms of the car they are using. Instead of a GPRM developed GT86, the team have shelled out for a brand new Audi R8 LMS GT4 from Audi Customer Racing. It brings the number of brands on the British GT grid to a remarkable eleven.

WHAT IS THE SCHEDULE FOR THE WEEKEND?

WHERE CAN I WATCH THE BRITISH GT AT SNETTERTON?

All necessary ticket information is available on the MSV website, with advanced tickets still purchasable and details regarding on-the-gate purchases also on display.

Each race, in addition to a selection of the supporting races, will be streamed live on the British GT’s Facebook page.

If you’re unable to attend the opening races live or watch through the various streaming services available, you can keep updated with all the action here at The Checkered Flag. We’ll be offering you in-depth reports of all the action from practice, qualifying and the races in addition to a number of exclusive interviews from drivers and teams as the drama unfolds.

By Michael Callander
2 Mins read
Fox Motorsport will return to the British GT grid in 2021 after a one-year hiatus, running a McLaren 570S GT4.