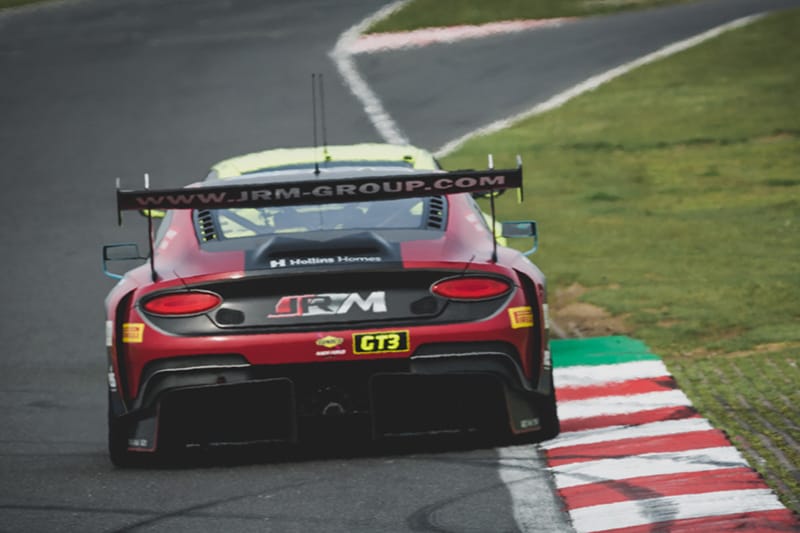 Seb Morris is ruing a final lap contact which robbed his Bentley Continental GT3 of power and denied the JRM machine he shares with Rick Parfitt Jr of a near certain podium finish. Despite the issues the duo, who reunited for an attempt at a second British GT Championship title this season, left the circuit third in the GT3 drivers championship.

Despite the pairing making a tenth place start in race 1, they were on for a podium in the first race. That was until the Bentley from Team Parker Racing made an error at the last corner of the final lap, causing a GT4 car to break hard in evasion. Morris was able to slow the JRM #31 Bentley to a stop to avoid a front end impact but one of the cars behind wasn’t able to do the same.

The resulting contact damaged the intercooler and resulted in a loss of power. The Bentley therefore lost out on the drag race to the chequered flag, being passed by two of its competitors.

The second race of the day saw the #31 machine running well but an error by Rick Parfitt at Murray’s corner put the Bentley nose first into the wall. The rocker turned racer extracted the car from the tyres but a later puncture dropped them out of the top ten. Even after the chequered flag, the Bentley crew were tested, a breakdown with smoke coming from the engine bay of the Bentley provided yet more challenge.

Despite all this, Morris is happy with his performance at Snetterton and the improvement he feels he has made as a driver. He said, “While the results this weekend weren’t what we wanted, or deserved, from my personal point of view I’m very happy with the performance I delivered”, said Welshman Morris, “I’ve been putting a lot of effort into my driving lately, working closely with the BRDC Superstars, and getting fitter and much better mentally.

“I was very happy to race so well in the first race, passing guys like Rob Bell and Jonny Adam even with the Bentley carrying 50kg extra. I feel I’m driving as well as I ever have, and in my qualifying session it was one of the best laps I’ve done in British GT.”

Reflecting on race one and the contact on the final lap, Morris said, “We really deserved a podium from race one, it was a tough battle with Jonny [Adam] but we both raced hard and fair. Third was in the bag but out of the Bomb Hole on the last lap, Ryan [Ratcliffe] went off from second and then came back on which made a GT4 car slam on the brakes.

“I had to come to a standstill and a car smashed into the back of me, the contact was so heavy it ripped away the intercooler pipe and that’s why I had no power at all coming out of the chicane. It’s a shame to miss the podium as everyone at the team had done a great job.”

Seb Morris and team mate Rick Parfitt Jr return to action on 8th – 9th June when the British GT Championship head to Silverstone for the three hour race which marks the start of the longer races in the championship.