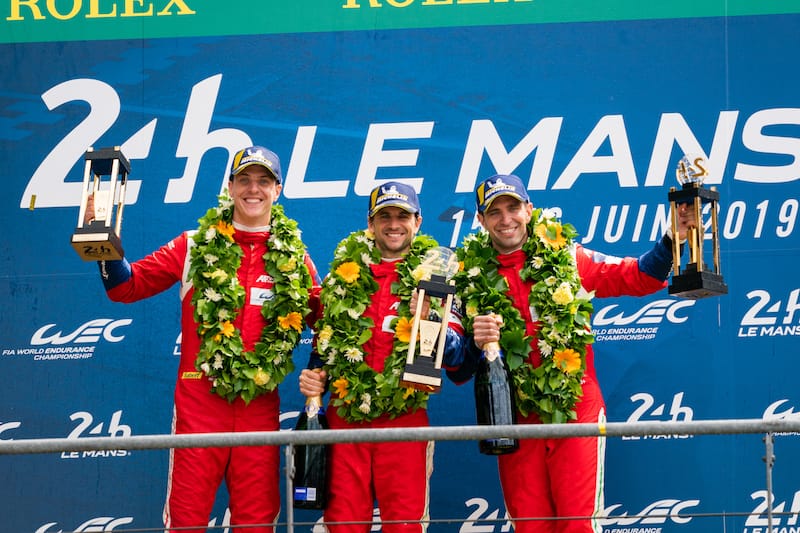 A surprising pace from James Calado, Alessandro Pier Guidi and Daniel Serra in their AF Corse 488 GTE Ferrari at the 87th 24 Hours of Le Mans saw them storm to class victory. The GTE Pro class was probably one of the hardest fought classes, with the battle being between five cars until the 19 hour mark.

The Ferraris have not had the best 2018/19 FIA World Endurance Championship, with their new evolution of the 488 suffering the same skewed Balance of Performance issues that the Aston Martin suffered at the start of the year. So to see the #51 leading the charge and competitively holding the lead through the final three hours of the race was a shock to most.

It’s unclear to know whether this was an overall more competitive pace from the Ferrari outfit for Le Mans, or a tribute to the trio of drivers onboard the #51 as the sister #71 car went into the garage during the night with an engine issue and never returned to the track, failing to complete the race.

Porsche GT Team looked to be a commanding force all week, and solidified this by completing the podium with two of their four cars. Taking both the Drivers’ and Manufacturers’ with very little competition throughout the year, and having at least one car on every class podium of the Super Season, has seen Porsche take their most compelling championship victories to date.

Ford Chip Ganassi Team UK have been the fighting force with Porsche throughout the season, and had looked to be in a good position at the start of the 24 Hours of Le Mans. Harry Tincknell, Andy Priaulx and Jonathan Bomarito put in a strong fight, being one of the five cars in place to take the victory and racing nose-to-tail with the other cars for a good few hours. However, as the light began to return to the Circuit de la Sarthe, the Fords appeared to drop off the pace, leaving the battle between the Corvette, Porsches and sole remaining Ferrari.

It was a race of ‘what ifs’ for Corvette Racing in their 20th Le Mans appearance. In the sixth hour, the #64 was in an incident that saw Marcel Fassler make heavy impact with the barriers. He was OK and got out the car, but that put an end to their race on the spot.

This put all hope on the #63 which looked to be in a very commanding position for most of the night session, sitting either first or second in class throughout the hours of darkness. It was the multiple Safety Cars that dropped the Corvette out of contention for the race win. Getting caught in the wrong Safety Car, as three are used at Le Mans, stretched the gap between Jan Magnussen and the leading Pro cars.

Magnussen was pushing hard to get back in the leading group, but sadly made a mistake that forced the #63 into the garage, losing a couple of laps on the field and completely dropping out of contention. It was a shame for Corvette, who looked in a strong position to get their first class Le Mans victory since 2015.

In a strange late change to the class BoP, Aston Martin Racing were hit hardest, getting a reduced boost and fuel capacity just after they had taken pole position for the blue ribboned event. The changes put them severely on the back foot come the race, with neither of the two cars ever looking like they were in a competitive position. It was a devastating end to what was looking to be the best Le Mans showing the Aston Martin crew had had since 2017. The car certainly had the pace to comfortably end on the podium, if not with both cars.

The BoP change was very confusing and surprising when it came through on Friday. Most had been commending the FIA and Automobile Club de l’Ouest for getting the BoP so right, with the top five qualifying within a second of each other. The pace of all of the competitors, excluding BMW which had been on the back foot since the pre-event test, had been very close, lining up for one of the most competitive Le Mans in GTE Pro for a few years.

So when the changes were put in place, it was a head scratch for most people and sadly took Aston Martin out of the race, robbing us of what could have been a competitive five-manufacturer race throughout the 24 hour endurance race.

With only Porsche, Ferrari and Aston Martin staying in the WEC next year, the competition might not be as electric as it has been in some points during the Super Season, but the three manufacturers will still be pushing hard to put on a great show for the fans and keep the championship fight going until the chequered flag at Le Mans next year.

Will Aspin Column - What a start to the year!