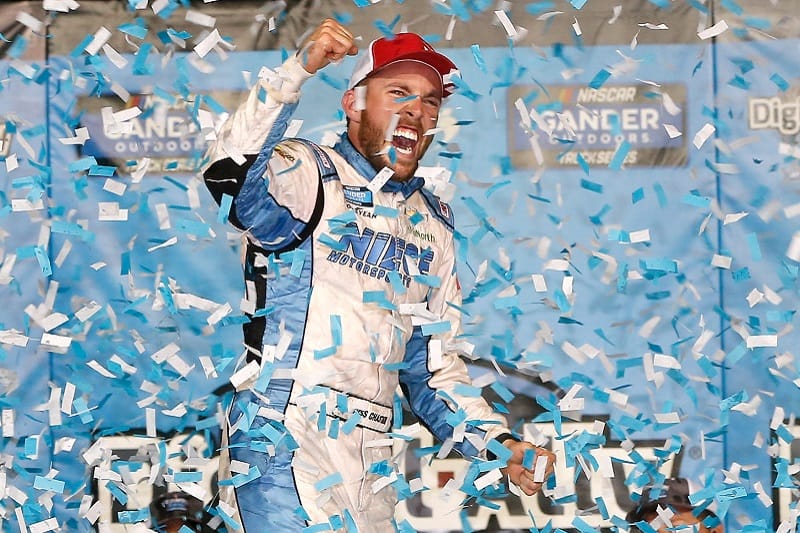 With eight races before the NASCAR Gander Outdoors Truck Series playoffs, Ross Chastain is throwing his hat into the ring. On Tuesday, he announced his intention to switch from Xfinity Series to Truck Series points, rendering him eligible to compete for the playoffs should he qualify. In order to make the playoffs, he must reach the top twenty in Truck points and win a race.

“After much consideration and many conversations, I’ve decided to pursue championship points in the NASCAR Gander Outdoor Truck Series, effective immediately,” Chastain stated in a release. “My Niece Motorsports team has been very fast all year, and we have a tall order ahead of us to get both in the top 20 in points and win a race before the playoffs start. But that’s a mountain we’re willing to climb. This shift will allow me to be in the truck race this weekend in Texas (Motor Speedway), and I’m grateful to everyone at Niece Motorsports for giving me this opportunity.”

In 2019, Chastain has competed in all three NASCAR national series (Monster Energy Cup, Xfinity, Truck), running as many races as he could in each. Prior to the switch, he was competing full-time in the Xfinity Series for JD Motorsports and Kaulig Racing (the latter for which he has a five-race schedule), with a best run of seventh at Las Vegas Motor Speedway; he was thirteenth in points. As a Cup driver, he has competed in all fourteen races so far with Premium Motorsports, recording a top ten in the season-opening Daytona 500, but will be replaced by Garrett Smithley for the upcoming race at Michigan International Speedway.

“I’m thankful to everyone at Johnny Davis Motorsports and Kaulig Racing for their efforts this year,” he added. “I will continue to run races for each organization where sponsorship for 2019 has been solidified. We have some wonderful partners at both organizations, and I’m fortunate they stand behind my decision, as well. I’m still going to go out and fight as hard as I can for wins.”

With Niece in the Truck Series, Chastain has impressed in the first eight races of the 2019 season. He has a top ten in every race to date, including winning his first career Truck race at Kansas Speedway in early May; had he raced for Truck points at the beginning, he would be second in the championship with 321 points. It will be Chastain’s first full-time Truck campaign since he finished seventeenth in the 2012 standings with SS-Green Light Racing.

Despite the Kansas win, he may not use it to qualify for the Truck playoffs as it had been earned while he was still racing for Xfinity points. Instead, he will start at zero points and will have to work his way to at least twentieth with a race win to guarantee a slot. Part-time driver Jesse Little currently sits twentieth in the standings with 91 points.

For Friday’s SpeedyCash.com 400 at Texas, he will pilot Niece’s #38 Chevrolet Silverado. He had raced the team’s #45 to start the year; Kyle Benjamin will drive the #45 for the Texas race.

By Justin Nguyen
2 Mins read
For the NASCAR Cup and Truck Series’ dirt races at Bristol, a random draw will set the lineup for the heats, and points will be awarded for passing drivers.
NASCAR Truck Series

By Justin Nguyen
2 Mins read
Keith McGee, who served in the US Air Force for 8 years, will make his NASCAR Truck début at Richmond in April with Reaume Brothers Racing and sponsorship from the Air Force Reserve.