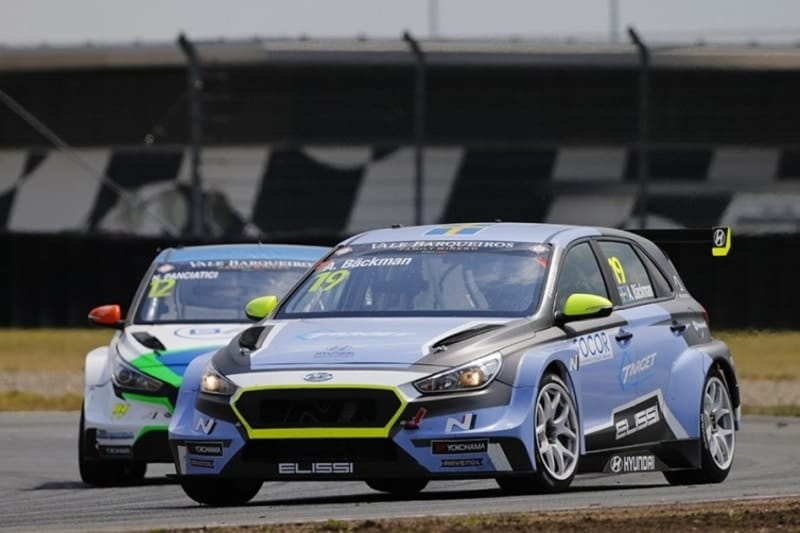 Andreas Backman won the opening race of the TCR Europe Series at Oschersleben earlier today, having fought hard with Daniel Lloyd for the entirety of the race distance.

There were problems from the outset for Santiago Urrutia however. A late radiator change after qualifying meant that the man who had been scheduled to start from third place on the grid would in fact have to make his getaway from the pit-lane instead. His race was therefore pretty much over before it had even begun.

At the front though, it was a fairly even getaway, but Lloyd managed to sweep up the inside line into Turn 1 to snatch the lead away from Backman. Just behind them, a fast-starting Jessica Backman briefly got up into third place before contact with Nelson Panciatici saw her drop back down the order again.

Just two corners later, chaos broke out as Jessica Backman was once again the unfortunate victim. Gilles Magnus‘ Audi was leaking radiator fluid rather severely, and as such, the road behind him had become ultra slippery. Backman was the first driver to lose control of her car at Turn 3, and as her Hyundai slid sideways, it was collected by Natan Bihel, Aurelien Comte and Viktor Davidovski.

Championship contender, Luca Engstler, was also in strife at his home race in Germany. A puncture had forced him into pit-lane at the end of the opening lap.

As Andreas Backman remained latched to the rear of Lloyd’s Honda, there was more trouble in the midfield. This time, Alex Morgan was the unfortunate recipient of heavy contact from fellow Cupra driver, Davit Kajaia, at the final corner. However, karma came back to bite the Georgian as he was promptly awarded a drive-through penalty.

However, Kajaia failed to report to pit lane to serve the penalty, and as such, was black-flagged by the stewards.

Amidst all the carnage, series debutant Zsolt Szabo had quietly worked his way up the order. Having started 21st on the grid, the man drafted in to replace Daniel Nagy at M1RA had worked his way up into a very impressive tenth place.

With five minutes left of this race, Andreas Backman still hadn’t given up hope of regaining the lead from Daniel Lloyd. Lloyd, however, was holding firm despite the ongoing pressure.

But with just two and a half minutes left on the clock, Lloyd finally made a small error at Turn 3. Backman didn’t need to be asked twice to seize the opportunity, and so the Swede was back in front after brushing past on the inside line. As Lloyd found himself out of position, he then came under threat from Nelson Panciatici who launched an opportunist attack on the Brit around the outside line of Turn 4.

In the space of just a few seconds, the chance of his first race victory had slipped out of Lloyd’s hands as the mighty Hyundai challengers finally made their way by.

From there, there was no way back as Backman and Panciatici began to eek out a healthy gap to the Honda duo of Lloyd and Tom Coronel.

In the end then, it was Andreas Backman who took a much deserved victory after having fought hard for it all race long.