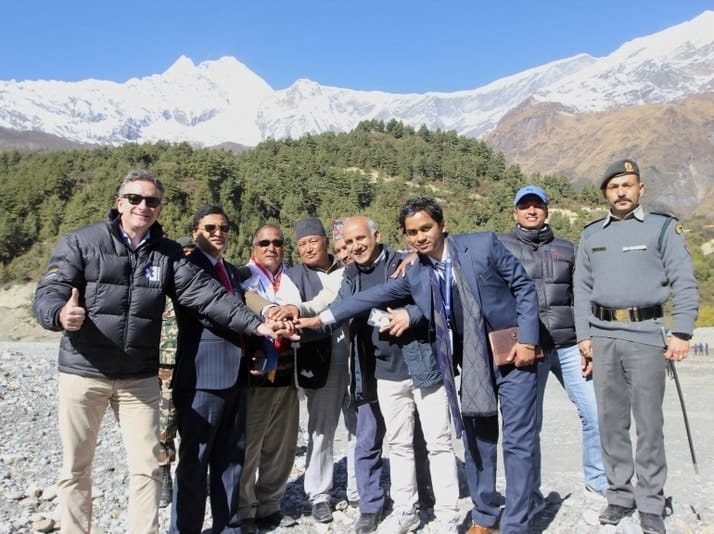 The Kali Gandaki valley as the site of the deepest gorge in the world will play host to the fourth round of the 2021 Extreme E season.

In the heart of the Himalayas Mountain range, the Mustang District is approximately 400 km from Kathmandu and hangs 2,750 m above sea level. Not only will the altitude will prove to be a true test for both driver and machine, but the course is made up of coarse gravel, deep ruts, rocky obstacles, and the small matter of the gandaki river as one of the major tributaries feeding the Ganges.

Alejandro Agag, Founder and CEO of Extreme E, made the announcement alongside Yogesh Battharai, Nepal’s Minister for Tourism, at the race site. Agag said: “Today we are here in the heart of the Himalayas, in the Mustang Region, to announce that Extreme E will be the first race to ever be staged in the highest mountain range in the world, the Himalayas.

“The Himalayan region is a spectacular, unique environment with incredible terrain for off-road racing, which will provide the sternest of tests to the world’s leading drivers, engineers and teams. We are literally in the heart of the mountains here, it is an incredible place.”

Nepal’s Tourism Minister Yogesh Batthari said: “We are extremely excited to welcome Extreme E to Nepal. The country has a unique natural and cultural diversity and harbours a number of instantly recognisable world landmarks such as Mount Everest – the tallest peak on Earth – and Lumbni – the birthplace of Buddha. We are confident that hosting this international series will serve to further our global appeal whilst being able to also shine an important spotlight on the climate issues which face our region and their solutions.

“Nepal is an exotic destination full of national treasures. Driving through our maginificent scenery with Extreme E’s pioneering electric SUVs will be a once-in-a-lifetime experience for the competitors, adventure enthusiasts and the fans watching on. It will be some spectacle!”

According to the UN, Nepal is fourth in terms of vulnerability to the climate crisis with the Himalayas, containing the largest concentration of glaciers outside the polar ice caps which makes up 66% of Nepal’s ice, meaning that the lifeline of river basins and ecosystems in this region could be lost as a result of climate change.

As part of Extreme E’s mission, it is working with local experts and groups to impliment a positive legacy to meet the local needs. Work has already begun in Nepal, consulting with the International Centre for Integrated Mountain Development (ICIMOD) on ways to support regional programmes and institutional partnerships.

The recent report from ICIMOD highlighted the growing pressures on all member countries with immediate action needed on all levels to tackle the growing problems of climate change in the region.

Dr David Molden, Director General of ICIMOD, said: “With its fantastic mountains, culture, biodiversity, and water resources, the Hindu Kush Himalaya is the pulse of the planet. When the pulse is fine, we know that humanity is taking care of the environment. Today we find that this pulse is under threat from climate and environmental change. We need to do all we can as a global society to raise awareness globally on these issues, and that is why it is important that Extreme E does draw attention to this region. We also appreciate that Extreme E’s legacy project will help us to protect the pulse.”

This is the fourth location to be announced for the inaugural 2021 campaign; joining Para, Brazil, Kangerlussuaq in Greenland and Saudi Arabia, where the location is to be confirmed.

By Justin Nguyen
1 Mins read
After racing the Desert X Prix with JBXE on a one-race deal, Molly Taylor will not return to the team for the upcoming Island X Prix as she focuses on “future projects”.
Extreme E

By Justin Nguyen
2 Mins read
Extreme E driver Laia Sanz will use the World Rallycross RX2e to help refine her four-wheel skills in her main category as she is scheduled to run multiple races for 2022.