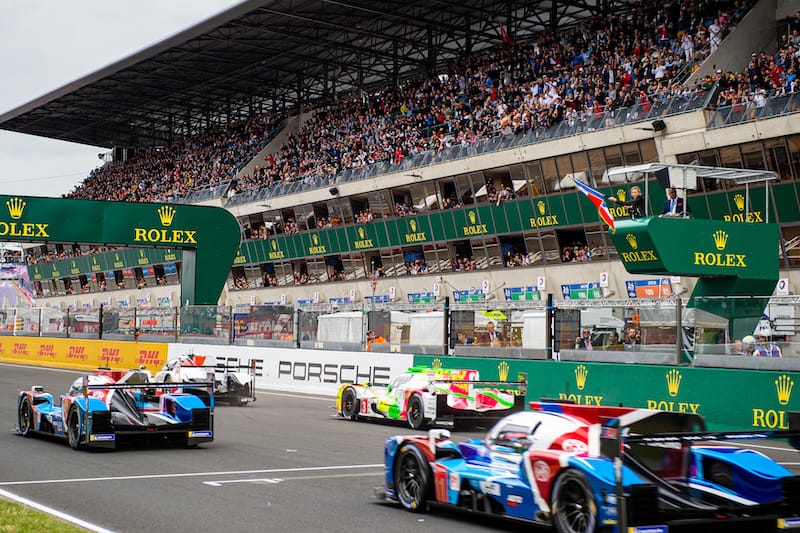 The Automobile Club de l’Ouest have confirmed a 62-strong filed for the 2020 24 Hours of Le Mans, with six LMP1 cars, 24 LMP2, 11 LM GTE Pros and 20 LM GTE Am cars. There is also an LMP2 car confirmed for the notorious innovative car Garage 56 spot.

As has been the case since the birth of the LMP1 field, no one-off entries are in the class. Currently, the top class in the field is filled by the two championship Toyota Gazoo Racing cars, two Rebellion Racing entries – with the #3 returning to the grid after its solo performance at the 4 Hours of Silverstone – and the two Team LNT Ginettas.

Notably, the ByKolles Racing Team has not been confirmed in the Le Mans line-up, and sits second on the reserve entry list. The team have sat out of the LMP1 class in the FIA World Endurance Championship this season as they have been focusing on pulling together a hypercar to enter in the LMH class next season. They always had intentions to return to the grid for the 6 Hours of Spa-Francorchamps and 24 Hours of Le Mans, as they confirmed last month, and were under the impression that they would be able to do so with no issues. It has come as a surprise to many that the ByKolles car is on the reserve list, and not the original entry.

LMP2 will be the biggest field on the grid, with the usual eight-strong class growing to contain 24 cars. Championship winners from European Le Mans Series and the Asian Le Mans Series in the LMP2 and LMP3 classes secured their guaranteed entry, and all join the LMP2 Le Mans grid. This sees IDEC Sport, EuroInternational (LMP3 in ELMS), Algrave Pro Racing, Rick Ware Racing and Nielsen Racing (LMP3 in ALMS) all get auto-allocations in the 24-strong class. Runners up in the LMP2 ELMS championship also get automatic entry to Le Mans, which is how G-Drive Racing will take their place on the grid.

Signatech Alpine, who receive an automatic entry for winning the race in LMP2 last year, decided to use their auto-entry for the all female Richard Mille Racing team of Tatiana Calderón, Sophia Flörsch and Katherine Legge. As the French team did not need the auto entry due to being a full-season competitor in the FIA World Endurance Championship, the decision was made to give the new ELMS team a chance to show their worth in the 24-hour endurance event.

Only one car comes from the American sports car series. IMSA WeatherTech SportsCar Championship receives one LMP2 auto-entry and one GTE Am auto-entry to Le Mans for their competitors. For the 2020 race, Cameron Cassels took the entry, and he will bring Performance Tech over from the states to compete in LMP2.

Nine additional cars have been accepted into the LMP2 class, including the innovative car  Association SRT41 in Garage 56. Three disabled drivers; Takuma Aoki, Nigel Bailly and Snoussi Ben Moussa, will take their modified ORECA 07 racing in a team ran by quadruple amputee Frederic Sausset. Sausset competed in Le Mans himself during the 2016 rendition of the race.

All four LMP2 chassis will be racing during the blue-riband event as Rick Ware Racing bring the sole Riley MK 30 to the field. Most team will be running the ORECA 07 with Michelin tyres for the race.

The additional six cars coming to the LM GTE Pro class are all from the IMSA championship. Two Corvette Racing cars come across as usual, with the Corvette IMSA drivers returning behind the wheel after Mike Rockenfeller and Jan Magnussen drove the sole Corvette in the 6 Hours of COTA and will take it to the track for the 1,000 Miles of Sebring. Along with them, the two IMSA Porsche GT Team cars join the grid as they usually do. The sole Risi Competizione brings the Pro number up to eleven.

GTE Am sees a big growth along with LMP2 as the entry number climbs from eleven to twenty. The GTE winners of ELMS last year, Luzich Racing, take their auto-entry in the prestigious race along with second-placed Dempsey Proton Racing who will bring the #99 back to the Circuit de la Sarthe.

Michelin Le Mans Cup winners Kessel Racing and ALMS GT champions HubAuto Corsa were also awarded auto entries, along with Richard Heistand from IMSA, who will bring the JMW Motorsport into the Am class.

Outside of the full season WEC cars and the auto-entries in class, the other seven cars joining the grid are all Ferrari 488 GTE Evos, meaning the Italian outfit will have twelve cars to Porsche‘s five and Aston Martin‘s two. On sheer number of entries alone, the odds are in Ferrari’s favour to bring home the Le Mans Am crown.

Ten cars appear on the reserve entry list, and usually the top three cars manage to move onto the full grid. Spirit of Race, ByKolles and the second IDEC Sport have the best shot of making it onto the grid, but the chances of Jan Magnussen’s LMP2 entry (High Class Racing‘s second car) or Ben Hanley and Felix Rosenqvist‘s DragonSpeed LMP2 making it onto the grid are very low.