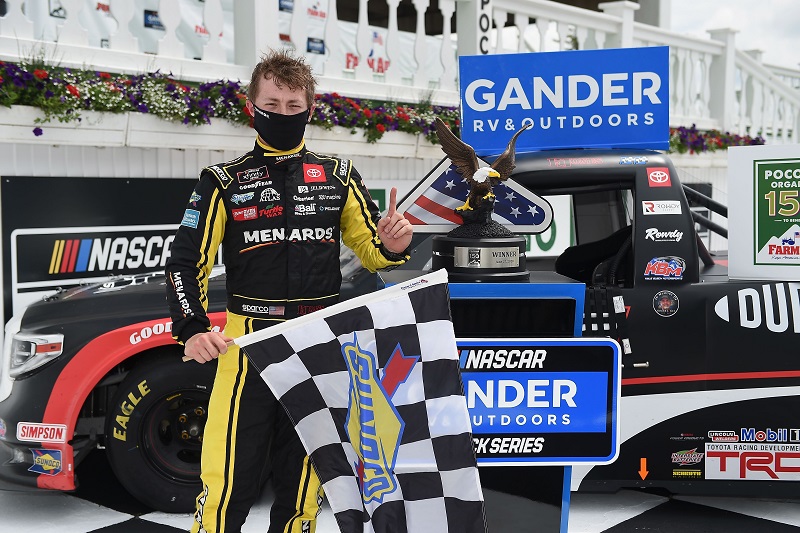 For the first time in NASCAR national series history, the Gander RV & Outdoors Truck Series, Xfinity Series, and Cup Series convened at one track for three races in one day. Sunday’s Pocono Raceway slate began with Brandon Jones winning a dramatic Pocono Organics 150, followed by Chase Briscoe taking the Pocono Green 225 victory. The Cup race, the Pocono 350 in the afternoon, will close out the tripleheader day and Cup doubleheader weekend.

For the support classes, they would be subject to chaos quite literally from the start. Both races suffered numerous wrecks and red flag delays to clean up said incidents. However, both events would also finish with dramatic two-lap sprints.

The Truck race had been postponed from Saturday to Sunday morning due to rain, marking yet another weather-delayed event in a season that has seen Mother Nature bring down her wet fist one too many times. Jones, an Xfinity regular running his first Truck race of 2020 for Kyle Busch Motorsports, would survive a chaotic race that saw nearly half of its 60 laps run under caution. The turmoil began almost immediately as Codie Rohrbaugh and reigning champion Matt Crafton wrecked on the first lap. Numerous incidents would plague the race as nine total yellow flags took place, one of which counted as the end of Stage #2, and two red flags were waved.

Two-time Stadium Super Trucks champion and 2018 ARCA Menards Series winner Sheldon Creed, seeking his first NASCAR national win, dominated as he led 31 laps and won the first two stages. However, he found himself having to climb through the top ten during the late portion. A Tim Viens spin set up a two-lap dash to the finish, during which Creed launched a dramatic pass on Jones and points leader Austin Hill to take the white flag. However, Jones returned the favour and beat out the two for his first career Truck victory.

Jones’ luck would not continue into his regular day job in the Xfinity Series. Like Crafton, he would fall victim to an opening-lap crash when he was turned by Austin Cindric and hit the inside wall. In just one hour after celebrating in Truck Series Victory Lane, he was classified with a last-place Xfinity finish.

Similar to the Truck race, Jones’ crash would set the tone for the Xfinity event as more wrecks took place. The second caution came just barely after the restart, prompting NASCAR to call off the schedule competition caution. Also like its Truck counterpart, a red flag was called to clean up the surface; in this case, it was related to oil leaking out of Brandon Brown‘s car, leading to sand being poured on the track.

Other drama included Justin Allgaier and Ross Chastain trading barbs (the two having clashed at various times throughout the season) and Justin Haley receiving a rare two-lap penalty and an order to the hauler after the race for turning Riley Herbst. Allgaier and his JR Motorsports team-mates Noah Gragson and Daniel Hemric, along with Austin Cindric were all also collected in a major crash during Stage #3.

Further wrecks eventually culminated to an overtime situation. Chastain and Briscoe led the field to the restart, and the two engaged in a battle for the remaining laps. Although Chastain led coming to the white flag, Briscoe moved him aside in turn two to score his fourth win of 2020.

By Justin Nguyen
1 Mins read
Kris Wright will finish out the 2022 NASCAR Xfinity season with Brandonbilt Motorsports, running all but three of the final twelve races.
NASCAR Xfinity Series

By Justin Nguyen
2 Mins read
A month after Josh Bilicki drove into Sargento signage during a massive wreck in the NASCAR Xfinity race at Road America, the cheese company has turned the moment into an actual sponsorship for Watkins Glen.