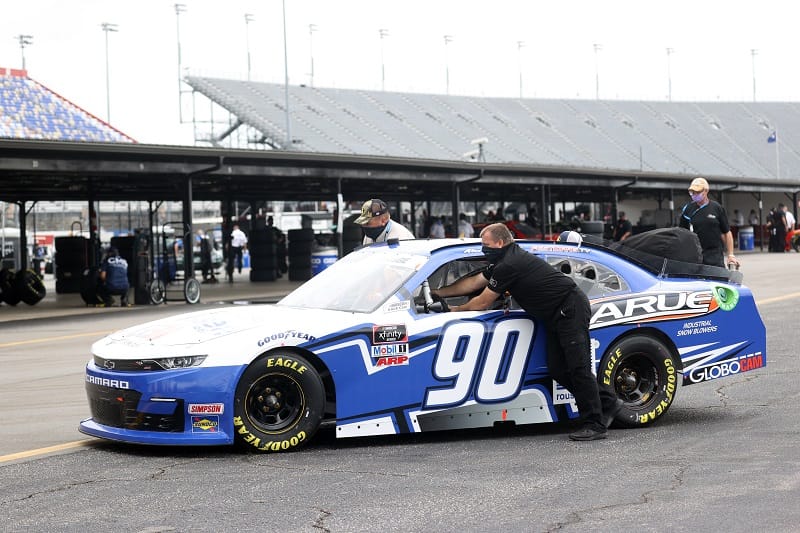 Although the 14–16 August weekend on the Daytona International Speedway road course will be a first for NASCAR, the sanctioning body will not hold practice or qualifying ahead of the Cup, Xfinity, Gander RV & Outdoors Truck, and ARCA Menards Series events. While the decision has been questioned by many, Xfinity driver Alex Labbé and his DGM Racing team decided to take matters into their own hands by participating in a test on the course as part of the Sports Car Club of America (SCCA) on Saturday.

Said test has come back to bite them. On Tuesday, NASCAR announced Labbé has received an L2-level penalty for the test, which violates Section 5.1.a. of the NASCAR rulebook on private vehicle testing. He has lost 75 points in the drivers’ championship as a result, dropping him from sixteenth to twenty-first in the standings, which his team intends to appeal.

NASCAR has implemented various rules for the Daytona weekend: besides not hosting any warm-up or qualifying sessions, drivers are also limited to racing in just one series that weekend. Labbé, the champion of the 2017 NASCAR Pinty’s Series (a Canadian tier that races primarily on road courses), and DGM Racing brought what they called a steel-bodied Xfinity car that was approved for SCCA competition. Steel bodies had been phased out after the 2018 season in favour of composite bodies.

According to a report from Catchfence’s Chris Knight, NASCAR confronted Labbé after he had run about seven laps in the test. Although a steel-bodied car was allowed for such SCCA tests, he did not have prior approval to take part and was ordered to stop.

However, various industry and media members have pointed out Labbé’s car was actually a current-era, composite-body vehicle, which would give DGM an advantage over other teams in terms of data acquired like tyre wear and the ideal setup.

In a Twitter thread, writer Bozi Tatarevic broke down the situation, explaining that track experience “is not the issue. The rule is not there to prevent drivers from training at a track but to prevent teams from doing testing of a car like the one that they plan to race.”

“If they set the precedent that running a current car at a current track is allowed then what would prevent a bigger team from just renting Daytona and bringing a bunch of road course cars to test all day this week?”

“DGM Racing is aware of the allegations against us,” the team said. “We feel we followed all the proper protocol and will be appealing the penalty. We are unable to comment further. Thank you for the support we have received so far.”

Labbé has three top-ten finishes in 2020, including an eighth-place run in the first road course race of the season at Indianapolis Motor Speedway in July.

UPDATE (12 August): The penalty has been overturned upon appeal.

Xfinity and Trucks gear up for Darlington weekend with throwbacks

By Justin Nguyen
8 Mins read
As part of the Southern 500 throwback weekend, many Xfinity and Truck teams will sport special liveries on their vehicles.
NASCAR Gander TrucksNASCAR Xfinity Series

By Justin Nguyen
7 Mins read
A historic weekend of NASCAR racing at the Daytona road course kicked off with Michael Self, Austin Cindric, and Sheldon Creed taking the victories in the support series.
NASCAR Xfinity Series

By Justin Nguyen
2 Mins read
Alex Labbe’s 75-point penalty for supposedly using a NASCAR Xfinity car at a Daytona road test has been overturned on appeal.