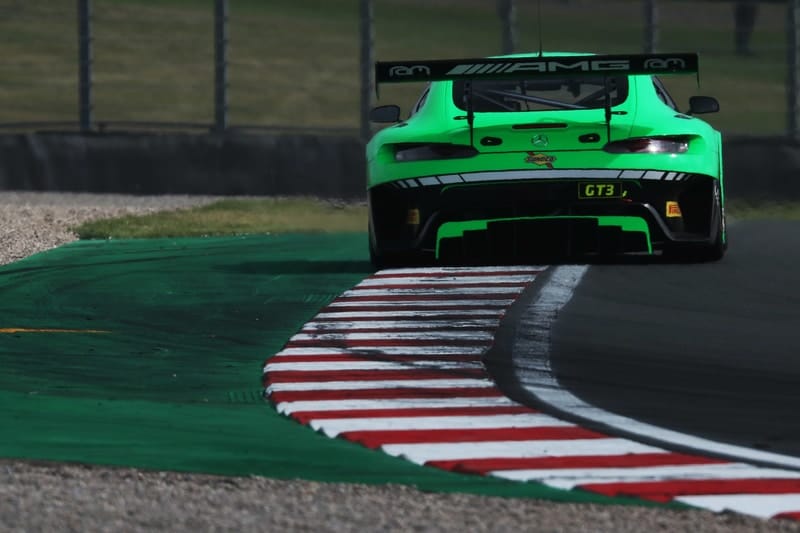 Buurman/ Loggie in the #6 RAM Racing Mercedes had dominated much of FP2 after Buurman set a quick time at the beginning of the session.

But Scott Malvern in the #66 Team Parker Racing Bentley, which had earlier been delayed with an electrical issue, popped up with 20 minutes left and went quickest by 0.1 seconds.

Not to be outdone, Buurman returned to the pits, put on a new set of slicks and promptly regained the top spot with a time of 1 minute 27.325, 0.050 seconds faster than Malvern.

Buurman’s quickest time was 0.15 seconds slower than Joe Osbourne‘s fastest time in Free Practice 1, but the top four were still under Nicki Thim‘s lap record of 1m27.896s from last year.

While Buurman and Malvern were in a league of their own Rob Collard/Sandy Mitchell continued to show their consistent pace by being quickest of the Silver runners in third, the #78 Barwell Lamborghini 0.321 seconds off second place.

Dean MacDonald caused a brief red flag when he spun his 2Seas Motorsport McLaren into the gravel at the Fogarty Esses on his second lap.

He was quickly extricated and went onto the set the 10th fastest time.

Championship leaders James Baldwin/Michael O’Brien had another difficult session, with the #2 Jenson Team Rocket RJN McLaren coming 13th and last of all the GT3 runners 1.6 seconds off the fastest time.

In GT4 the #23 Speedworks Toyota Supra made it two from two with another quickest time.

The free practice 1 pacesetters of Sam Smelt/James Kell were on top again, but this time by a smaller margin.

Their time of 1 minute 36.099 was only 0.031 seconds faster than Patrick Kibble/Connor O’Brien in the #95 TF Sport Aston Martin Vantage.

The #95 car was once again the quickest of the two TF Astons as team-mates and joint championship leaders Jamie Caroline/Daniel Vaughan were fifth fastest 0.25 seconds down.

Follow the Checkered Flag for all latest British GT updates.

Adam Makes It Two From Two in Free Practice 2

By James Thompson
1 Mins read
Jonny Adam was fastest in Free Practice 2, making it two fastest times from two sessions on his return to the championship.