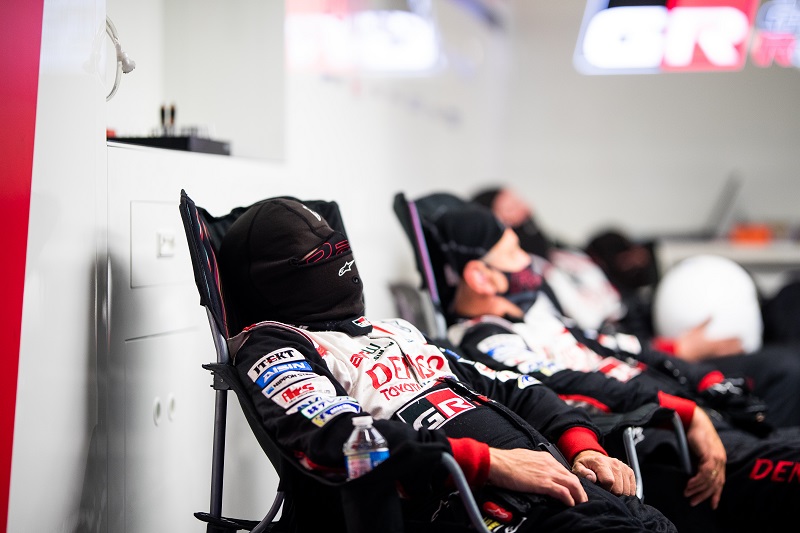 Toyota Gazoo Racing had been looking at a dominant one-two finish, picking up a maiden 24 Hours of Le Mans victory for Mike Conway, but it was not to be as the #7 suffered issues during the night, dropping down to fourth in class. It was a bit of a chaotic race throughout the classes in the hours of darkness, with ten cars now on the retirees list.

The #7 Toyota had had a five lap lead on the sister car, having had a seamless race, but as the sun set and darkness fell across the track it was all about to come undone. A turbo issue saw the car pushed back into the pits for a long 30 minute stop. The team worked hard, but it was not enough and just after the car had been released back into the race it was heading back to the pits. The collective time lost dropped them all the way down to the back of the LMP1 field, 6 laps behind the sister car.

The Rebellion Racing cars have had a fairly trouble-free race, running a strong second and third. There had been at least a lap between all of the LMP1 cars, but with this buffer the team decided to pit the leading #3 Rebellion for some body work repairs, pushing it briefly into the garage. The #3 remains ahead, but now the sister #1 car is only 28s behind.

United Autosports had been on for their best result ever, with their two cars commanding the pace at the front of LMP2. But a fractured oil tank put a halt to their dreams as the #32 car was forced into the garage. It fell from first to fourteenth as it sat helplessly in the garage, taking them completely out of contention for the race win.

Mikkel Jensen did his best to help the #26 G-Drive Racing recover after its earlier engine failure, and put in a mega stint as the sun rose over the track. Helped by the falling #32 car which gained it a place, Jensen pulled the car back into contention for the class podium, fighting and passing the #31 Panis Racing for third. As he hands over to team mate Jean-Eric Vergne, the G-Drive remains ahead, but there is still plenty of racing left to occur.

Throughout the night, it was a Aston Martin Racing/AF Corse battle, as the British manufacturer tried to pass the Italian one for lead in the class. They pair ebbed and flowed in pace, swapping the pit stop advantage as they raced through the hours. At the end of hour 18 it was Alex Lynn in the #97 leading the way. He holds about a 56 second advantage over Alessandro Pier Guidi as we move into the final quarter of the race.

The rest of the GTE Pro field is pretty much out of contention for the lead of the race, with third, fourth and fifth split from each other by two laps.

Heartbreak came to the Paul Dalla Lana #98 Aston Martin that had led so much of the 24 Hours of Le Mans as they were forced into the pits during the night for repairs. They had been fighting close with the #90 TF Sport, trading the lead in class throughout the night until Ross Gunn was forced to give up the ghost. A suspension issue made it unable for the car to keep racing, and they gave up their chance of winning to the repairs. Augustos Farfus returned to the track in the #98, 11th in class.

No rain fell during the night, and the prediction for rain is continuously being pushed back, looking more and more unlikely to effect the race.

Three cars were lost from the race during the night: the #70 MR Racing, #63 WeatherTech Racing and the #21 DragonSpeed USA. The #63 suffered too much damage after a clash with the #29 Racing Team Nederland, whilst the #70 retired after a shock failure that was not repairable and the #21 had engine issues.