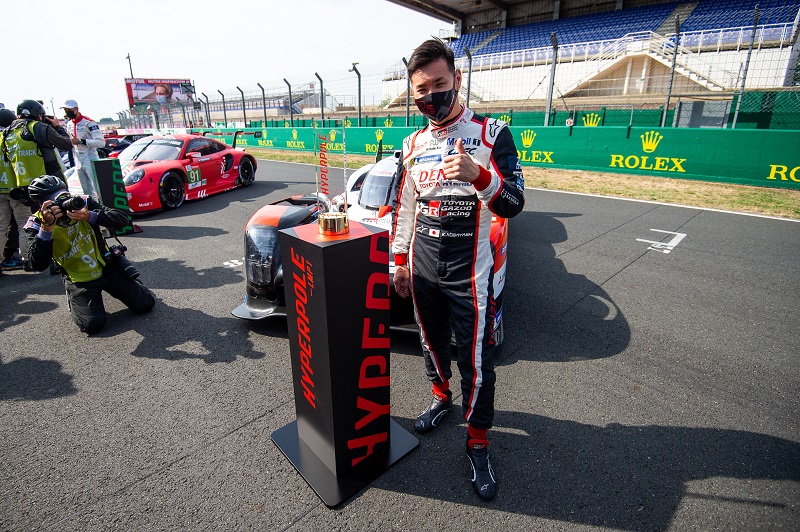 It was a very tight battle for the overall pole position at the 24 Hours of Le Mans, but Kamui Kobayashi pegged Rebellion Racing‘s Gustavo Menezes to take the first ever Hyperpole.

After the qualifying session yesterday saw the top six cars promoted to Hyperpole, the half an hour session went underway to determine the pole sitters in each class. Every team was given two new sets of tyres for the session and elected one driver to take on the pole-shoot out duties.

As the session got underway, it looked like it was going to be a Toyota Gazoo Racing walkaway, with Kobayashi setting a 3:15.920 ahead of Kazuki Nakajima‘s 3:17.424 in the sister car. The pair easily locked out the front row, with none of the privateer LMP1 cars getting anywhere near those lap times during yesterday’s running.

But Menezes pulled out the stellar pace he had been showing throughout the last couple of practice session, blowing both Toyotas out of the water with his 3:15.822. Not only was this fast enough to steal provisional pole away from Toyota, looking to be the first privateer ever to take overall pole position at Le Mans, but he also claimed the lap record for a privateer and non-hybrid car.

Toyota now had a race on their hands, and it was up to their two Japanese drivers to retake pole position. Nakajima fell short in his second lap, only improving to a 3:16.649 and giving Rebellion hope that they might take their first Le Mans pole position. However, heartbreak came to Rebellion when Kobayashi set a staggering 3:15.267.

But the lap-record holder was not finished, and had his eyes set on breaking the lap record he set three years ago. On his final flying lap, Kobayashi took the #7 too wide, exceeding track limits and voiding the lap that, from the first two sectors he put in, looked to be the one to break the previous track record. He aborted the lap, having been told by the team it would not count.

“I am really happy to be on pole position again. The team did a great job to prepare our car for this.” Kobayashi said at the conclusion of the session. “In Hyperpole we had two chances to set a quick lap so we played it a bit safe with the first one.

“I was trying to break my record and it was close. I pushed to the maximum but unfortunately I had to abandon the lap. It had been a quick lap up until then. I think there was a chance to go faster so it’s a pity it was deleted.”

It was not a Toyota front row lock out, as Menezes remained between the two Japanese cars at the chequered flag. The starting grid will run Toyota, Rebellion, Toyota, Rebellion, with the #4 ByKolles Racing Team bringing up the rear of the field.

The fight was on in LMP2, but it was Paul di Resta who dictated the pace of the field. His lap time of 3:24.528 – a new lap record at Le Mans for LMP2 – turned out unbeatable, but even his first lap in the #22 United Autosports would have been enough to secure him pole.

Jean-Eric Vergne tried his best to hook up a lap in the #26 G-Drive Racing, but could come no closer than three tenths off the time, having to settle for a P2 start. Rounding off the top three was Nyck de Vries in the second TDS car #29 Racing Team Nederland, but in his first run de Vries nearly took himself out of the runnings completely.

Losing the car going through Porsche Curves, de Vries was pitched off track into a gravel trap and very closely avoided contact with the barriers during his first flying lap. His lap time suffered for it, putting a lot of pressure on his second lap as he made his way back to the pits for a tyre change. The Dutchman believed there was more time in the car and that second was possible, but his incident through the high-speed Porsche Curves caused him to miss out on those two tenths he needed to beat Vergne.

Kenta Yamashita continued his strong performance in the #33 High Class Racing, securing a fourth place start for his team. Alex Brundle beat out fellow patriot Will Stevens for fifth on the grid in the second United Autosports entry.

Continuing on from their performance in both free practice three and four, Porsche GT Team secured pole position in GTE Pro for the 88th rendition of the 24 Hours of Le Mans. But for them, it was one car at the front, one at the back of the class Hyperpole.

It was a fight between Sam Bird in the #71 AF Corse and Gianmaria Bruni in the #91 Porsche, at the start of the session with Bird leading the way with a 3:51.515 after the first flying laps had been set. In a surprising turn of events, Matt Campbell in the #77 Dempsey-Proton Racing Am Porsche had gone two tenths faster than Bird, making it provisionally an Am car leading away the GTE cars in tomorrow’s race.

Sadly for Campbell it was not to last, and like in LMP1 the second round of flying laps saw the lap times drop. Bruni took pole with an unbeatable 3:50.874, whilst Alessandro Pier Guidi in the #51 Ferrari kept the tifosi’s hopes alive finishing the session P2. Three different manufacturers start in the top three as Marco Sorensen put his #95 Aston Martin Racing third.

Only the top three in GTE Pro were fast enough to beat the GTE Am cars. Alex Lynn in the #97 Aston Martin, Bird in the #71 Ferrari and the #92 Porsche GT Team will all start mixed in with the top three from GTE Am.

It had looked like Campbell would have class pole in the bag after his first lap put him faster than all of the Pros, but Come Ledogar jumped ahead by the smallest of margins in his second lap. 0.05s split Campbell from Legodar’s 3:51.266 at the chequered flag, with both cars starting ahead of Aston Martin #97.

Due to the distribution of Balance of Performance in GTE, it has been known that some teams do not aim to get pole position so as to protect themselves from late BoP changes. As of the time of publishing, there have been no changes to the current BoP handouts for the GTE cars, even though Aston Martin expressed concerns that they may be handed a change yesterday.