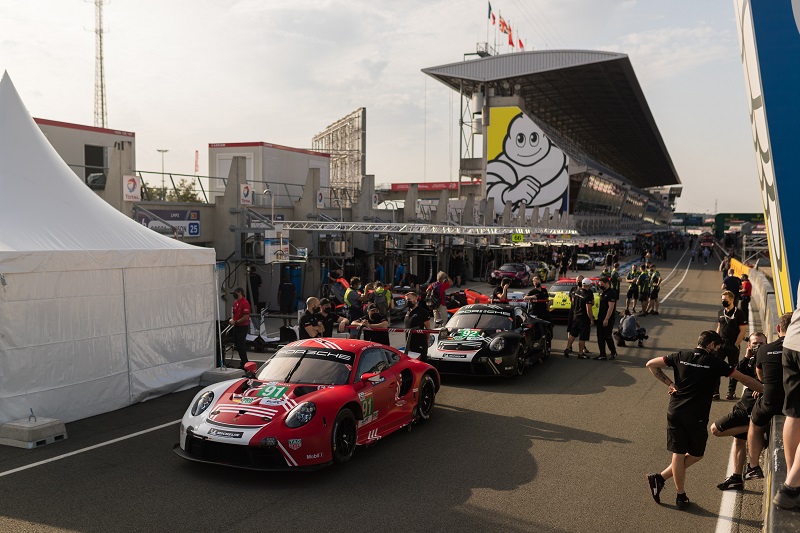 Due to Covid-19, the 24 Hours of Le Mans was postponed from its June date to this weekend, but the global pandemic has had more of an impact on the race than just rescheduling. A lot of the teams withdrew from the race due to financial reasons which means that the full ten-car reserve list has been exhausted. 60 cars will make up the 88th 24 Hours of Le Mans grid.

The largest class is LMP2, holding 24 cars, but GTE Am is only just smaller than that with 22. More LMP2 and GTE Am cars will be on track in comparison to the manufacturer-backed counterpart classes of LMP1 and GTE Pro, as these classes have been most affected by Covid. This will be the smallest field in the top class at Le Mans since the establishment of LMP1 in 2004, having only five cars. GTE Pro is slightly stronger with two American Ferraris joining the full-season FIA World Endurance Championship cars to see eight in the class.

Exclusion to the rule that one off entries are not allowed in LMP1 was expected for the #4 ByKolles Racing Team when the original entry list was announced in March, but much to the surprise of many they were only gifted a spot on the reserve list. Worries began to fall in the team as they relied on cars to drop out of the field to get on the grid, but with the current social situation seeing all entries on the reserve list enabled to go racing, ByKolles made the cut.

Drivers Tom Dillmann, Bruno Spengler and Oliver Webb will race the ByKolles against full-season WEC entries from Rebellion Racing and Toyota Gazoo Racing. Rebellion also bring back their one-off entry from the 2019 4 Hours of Silverstone in the hands of Romain Dumas, Nathanael Berthon and Louis Deletraz. The three WEC cars: the #1 Rebellion and both Toyotas, will be raced by the usual WEC pilots.

The only additions on top of the usual WEC GTE Pro class for the blue-ribbon event are American Ferrari entries of WeatherTech Racing and Risi Competizione. The #63 WeatherTech Ferrari moved up from Am to Pro and will be driven by Cooper Macneil, Toni Vilander and Jeffrey Segal, whilst USA-counterpart Risi Competizione will be raced by the all French team of Olivier Pla, Sebastien Bourdais and Jules Gounon.

In the AF Corses, Daniel Serra joins Alessandro Pier Guidi and James Calado as he usually does in last year’s GTE Pro Le Mans winning car, and Sam Bird returns to his endurance racing team in the #71 with Davide Rigon and Miguel Molina. Up until the 2019/20 WEC season, Molina had always been the third driver to partner with Rigon and Bird, but with Bird prioritising FIA Formula E last season, Ferrari opted to make Molina the full-time driver.

With the largest number of cars, there is a lot to take note of in LMP2. Since the original announcement of the entry list in March, three cars have fallen off the LMP2 entry list: #43 Thunderhead Carlin Racing, #49 Rick Ware Racing, and #84 Association SRT41, but two more have joined meaning the class has only lost one car in the past six months.

G-Drive Racing strengthens its force with a second entry in the field. The European Le Mans Series #26 remains to be piloted by Roman Rusinov and Jean-Eric Vergne as it was last year, but with then silver driver Job van Uitert being promoted to gold, he could not remain in the team. van Uitert will race against his team from 2019 in the second United Autosports car with Alex Brundle and William Owen, whilst Mikkel Jensen takes his vacated seat to partner with Rusinov and Vergne. The second #16 entry will see Ryan Cullen – who was original pencilled in to race with DragonSpeed USA – Olivier Jarvis and Nick Tandy together.

Gaining a spot on the grid by being brought up from the reserve list, IDEC Sport‘s second car will be driven by the silver/silver/bronze line-up of Kyle Tilley, Jonathan Kennard and American racer Dwight Merriman.

DragonSpeed also has two entries, with the #27 being added alongside the #21. The line-up of the #21 only retains Memo Rojas from March, with Juan-Pablo Montoya and Thimothe Buret joining the Mexican to replace Pipo Derani and Cullen. The #27 will have Henrik Hedman, Ben Hanley and Renger van der Zande at the wheel.

From the reserve list, neither second entries from High Class Racing or Inter Europol Competition have remained on the final entry list.

GTE Am has gained two entries from its original grid of 20, however two cars have completely disappeared from the class since the first draft of the entry list came out. Some teams moved to a different class or re-entered with different race numbers/driver line-ups, but sadly #74 Kessel Racing and #81 GEAR Racing will no longer take part in the race.

Team Project 1 and Iron Lynx join Dempsey-Proton Racing as the only teams with three cars on the grid as their additional entries moved into the race from the reserve list. Steve Brooks, Julien Piguet and Andreas Laskaratos will be in charge of the only non-WEC Team Project 1 Porsche 911 RSR, whilst Iron Lynx moves from one car to three. Both Iron Lynx cars will field all Italian team, with the #60 under the watch of Sergio Pianezzola, Claudio Schiavoni and Paolo Ruberti as Andrea Piccini was moved to the #75 to partner with Rino Mastronardi and Matteo Cressoni after originally being drafted for #60 earlier this year.

Spirit of Race and Proton Competition find their way into the GTE Am pack after also moving from the reserve list. The Ferrari team, Spirit of Race, holds onto the line-up of Duncan Cameron, Aaron Scott and Matthew Griffin it had in March, whilst Proton Competition has gone a different way, not retaining Dennis Olsen who was the only driver they had confirmed earlier this year. They bring in the whole new line-up of Horst FelbermayrJr, Michele Beretta and Max van Splunteren.

What was known as the Hub Auto Corsa #80 entry in March is now Hub Auto Racing #72. The only thing that has changed about this entry is the race number and Tim Slade has been swapped out for ex-BMW driver Tom Blomqvist. Following similar suit, the last additional entry to GTE Am is the #66 JMW Motorsport. In March, they were #87 and had only confirmed Richard Heistand would be in the car. Now racing with a different number, Maxwell Root and Jan Magnussen partner with Heistand in the Ferrari 488 GTE Evo. Magnussen was due to appear in the second High Class Racing LMP2 car but as this did not retain its promotion onto the grid the Danish driver will be racing in Am.

Matt Campbell finds himself back in his WEC #77 Dempsey-Proton Racing car after his chance to race with Porsche in one of the works Pro cars was taken away when the manufacturer withdrew its IMSA entries from the 24-hour race.

The full confirmed entry list can be found below: