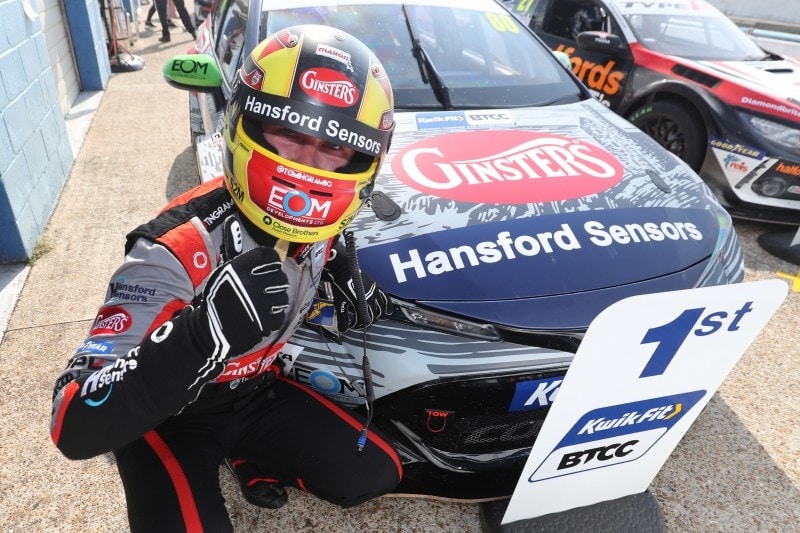 Ingram made it two out of two at Thruxton. Photo Credit: Btcc.net media

Tom Ingram took a lights to flag victory in race two of the day at Thruxton in the Kwik Fit British Touring Car Championship.

The Toyota driver repeated his performance from the first race with a faultless drive in which he saw off late race pressure from Dan Cammish to double his victory tally for the day and indeed, the season.

Ingram made a textbook start to comfortably lead the pack into Allard. Fellow front row starter Cammish made an even poorer start than he did in the first race, losing second place to team-mate Matt Neal. He nearly lost third to Ash Sutton but aggressively squeezed him towards the grass at the exit of the complex to maintain position.

At the start of lap two Neal moved aside to let Cammish through into second and he set off in pursuit of Ingram who had built an impressive gap.

Cammish caught Ingram within three laps and applied intense pressure, shadowing his every move. However, he could not get close enough to mount anything that represented a genuine overtalking attempt.

At the flag, the pair were nose to tail with Ingram getting the better of his rival by just three tenths of a second.

Neal held on to third despite considerable pressure from Sutton who was forced to settle for fourth.

A late engine failure for Adam Morgan promoted Rory Butcher to fifth. Tom Oliphant continued his charge up the order by finishing sixth.

Colin Turkington could only manage 13th having started at the back following his first race DNF.

The final race of the day begins at 17:25 and will be broadcast live on ITV4.