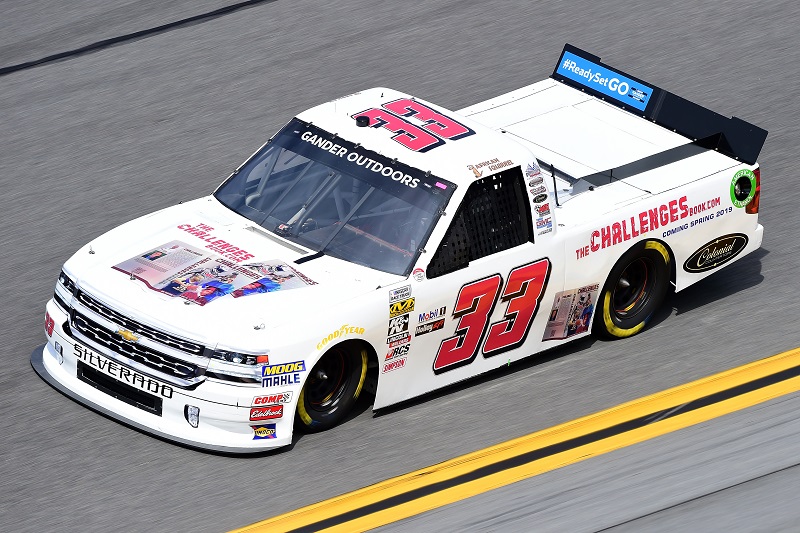 Josh Reaume, a NASCAR Gander RV & Outdoors Truck Series team owner and driver, has been indefinitely suspended by NASCAR. On Tuesday, the sanctioning body announced he violated Sections 12.1 and 12.8.1.e of the rulebook in regards to a post made on social media. Under the rule, discipline may be given for any “public statement and/or communication that criticizes, ridicules, or otherwise disparages another person based upon that person’s race, color, creed, national origin, gender, sexual orientation, marital status, religion, age, or handicapping condition.”

Specifics of the offending post were not given, but it was reported by Kickin’ The Tires that the image was of a swastika, a symbol with an obviously anti-Semitic history. Incidentally, the suspension comes on the 82-year anniversary of Kristallnacht, a two-night Nazi German period of violence against Jews that marked the start of Jewish persecution in Europe and ultimately the Holocaust.

Reaume spent 2020 as an owner-driver in the Truck Series, running twelve races in the former for his Reaume Brothers Racing team; his best finish was seventeenth at Michigan. The team also formed a partnership with RSS Racing of the Xfinity Series, with Reaume assuming operations of RSS’s #93 car primarily driven by rookie Myatt Snider. Later in the year, Reaume ran two Xfinity races at Kansas and Martinsville, the latter in the #93 while Snider finished the season with Richard Childress Racing. The Kansas start saw his best 2020 Xfinity finish of thirty-third with Mike Harmon Racing.

In thirty-five career Xfinity starts since 2014, his best finish is twenty-third at Daytona in 2015; the start came with Obaika Racing, a now-defunct team whose owner Victor Obaika hails from Nigeria, where Reaume grew up. Reaume’s highest Truck finish is sixth at Daytona in 2019 with RBR.

“In regards to NASCAR’s statement involving my social media post: On Thursday I posted a picture of my evening snack and it was taken out of context. It was never meant to offend anybody and I’m sorry if it did. I hope that you will judge me by my character and who you know me to be. I grew up in an ethnically diverse family and West Africa was my home for 13 years. My team has arguably had the most diverse set of drivers in the history of NASCAR. My goal is to continue to partner with fans,sponsors,drivers, and crew members from all backgrounds and share opportunities. I appreciate everyone’s support. I look forward to Daytona. Josh“.

Reaume is the third NASCAR national series driver to receive an indefinite suspension for behavioural reasons. In the spring, Cup Series driver Kyle Larson was slapped with one for using a racial slur in an iRacing event. In September, Xfinity driver Mike Wallace received the same punishment for unspecified reasons, but it can be inferred that it is related to racially insensitive posts on his Facebook account. While Larson completed sensitivity training and has since been reinstated, Wallace remains suspended after his final appeal was denied.

By Justin Nguyen
1 Mins read
Matt Crafton’s penalty for the front of his truck being too low in Darlington post-race inspection has been overturned. His fifth-place finish has been restored.
NASCAR Truck Series