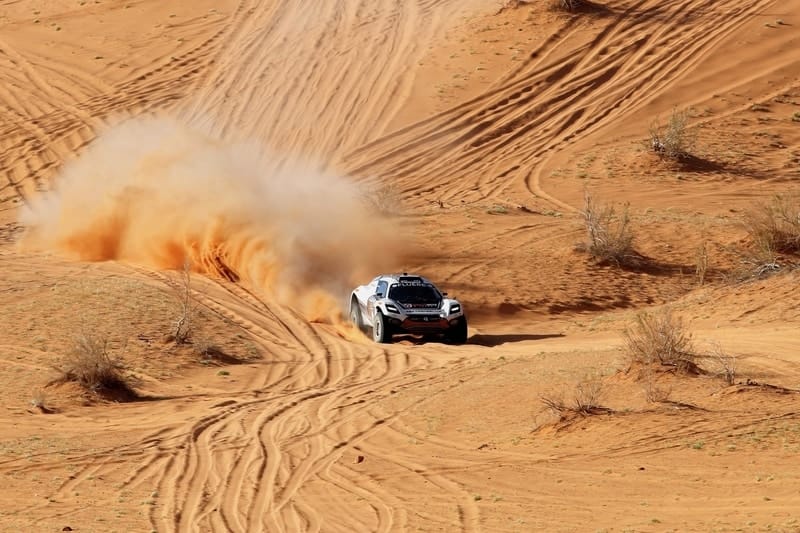 The Crazy Race Grid was made up of the fourth, fifth and sixth placed qualifiers from Saturday’s action, with a place in the Final up for grabs for the Race Winner.

The race saw Teams and Drivers take to the 8.8km course in the Arabian Desert over two laps, with a driver switch taking place at the end of lap one. The goal; finish first to join Rosberg X Racing and X44 in the Desert X-Prix Final.

Lining up on Pole Position for the Crazy Race was Timmy Hansen for Andretti United Extreme E, he was joined by Jenson Button for JBXE and Hispano Suiza Xite Energy with Oliver Bennett at the wheel.

It was seen the Semi-Final before this race that it was vital to take the hole-shot, due to the visibility advantage that is gained from this. The all-important holeshot went to Timmy Hansen for Andretti United, followed by Bennett and Button. The Crazy Race remained a tighter affair than the Semi-Final for the first half of the opening lap, but Hansen still held a 5 second lead over the now infamous Desert drop.

Catie Munnings had a half minute lead to maintain and throughout the second half of the final lap that is what she did. The order behind her predictably remained the same, as it did in the Semi-Final.

It was Andretti United who took the Crazy Race win, Munnings bringing it home to book her teams spot in the final. Team Hispanio Suiza came home second and Team JBXE took the final spot in the Crazy Race. The result marked a huge turnaround for Andretti United, who at the hands of Munnings suffered a puncture in qualifying, but now find themselves in the Desert X-Prix Final.

The Final Classification for the Crazy Race was as follows:

You can re-watch all of the action so far right here:

Extreme E to expand its digital engagement in China

Alejandro Agag: "We’ve worked so hard on this for many years, and finally everything has come together this weekend"

By Pontus Lindroos
1 Mins read
The Extreme E founder and CEO, Alejandro Agag, explains in an emotional way how well this first-ever X Prix weekend has been
Extreme E

Sebastien Loeb: "That was a bit disappointing, but for the rest I’m happy with the weekend and the team did a great job."