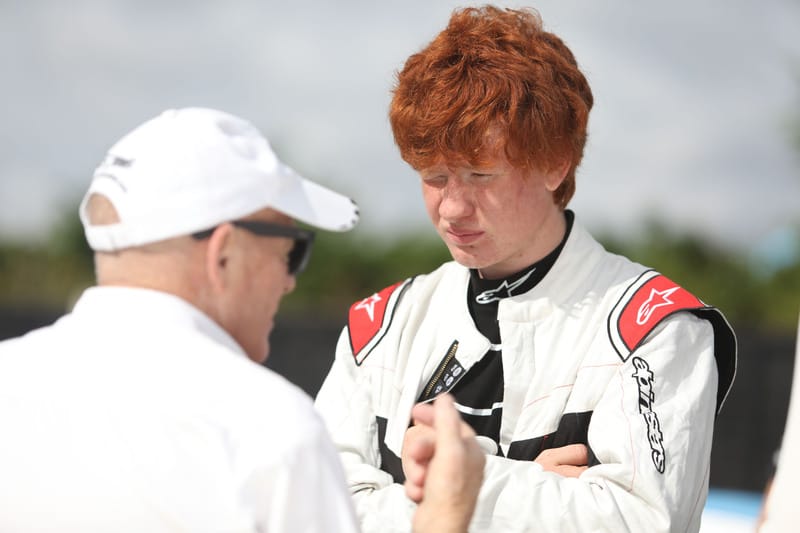 Hi guys, my name is Will Aspin and I’ll be writing a column for The Checkered Flag every month which I hope you’ll find interesting. I’m 16-years-old and about to start only my second season of car racing next month, competing in the Ginetta GT5 Challenge. I’ll use this first column to tell you about myself, how I got into motorsport, my aims for this year and my life away from the track.

So, to begin with, I live in Florence, the capital of Italy’s Tuscany region. My parents, who both inspire me and have already helped me massively with my motor racing ambitions, moved there around five years before I was born. Looking back, I suppose the seed of being interested in motorsport was sewn when my father and I used to avidly watch the F1 races on TV back in 2009. But he has petrol running through his veins and is a huge follower of all things motorsport – as was his father. My father watched and met the likes of Jim Clark, Nigel Mansell, Damon Hill and Michael Schumacher – who happens to be my idol – so I guess me entering motorsport was inevitable!

Although I was born in Italy, I am British and lived in Bath and went to Monkton Prep School there when I was eight years old. It was actually when I was living in England that I jumped into a kart for the very first time, just for fun, when I was about 11, at an outdoor corporate event at Castle Combe close to where I was living at the time. I really enjoyed the experience and that whet my appetite for competition.

I only raced karts for around two years, my father suggesting that rather than move up the kart racing ladder, switch to car racing in a Ginetta which turned out to be great advice. I tested a Ginetta Junior at Blyton Park in October 2018. I would have only been about 13 at the time but Charlie Robertson, a previous Ginetta Junior and GT4 SuperCup champion, was on hand to give valuable advice. I immediately loved it. It was a really exciting car to drive. We didn’t want to enter the Ginetta series a ‘privateer’ so went along to meet the guys at Elite Motorsport in Norfolk. We met Team Principal Eddie Ives and Elite’s ‘resident’ coach Chris Hodgetts and came away very impressed – plus I very much liked the team’s yellow and black race car colour scheme!

We came up with a testing plan before I made my car racing début in August 2019 at Snetterton which unsurprisingly had its ups and downs as it was a totally new experience for me – and in front of ‘live’ TV! I was pretty nervous but very excited and finished two of the three races that weekend. It was ultra-competitive out on track, I’d not experienced anything like it before, but nevertheless found it very enjoyable. I then did the Winter GJ series netting a couple of top-10 finishes which added to my very minimal car racing experience.

I scored seven top-10 race results in last year’s Ginetta Junior Championship as a “Rookie” with a best sixth-place finish at Snetterton. I was ‘locked down’ in the UK for most of last year – it would have been a very different story if I’d been stranded in Italy and unable to get back for the races though. One of my over-riding memories of last season was a battle I had from start to finish with my Elite team-mates, Josh Miller and Tommy Pintos, at Croft – so intense and great fun to battle it out with them as I spent so much time with them in the paddock during a race meeting – they’re your mates essentially.

I’m staying with Elite for 2021 but switching to the Ginetta GT5 Challenge. I’ll be aiming to hone my race craft and improve my race pace to ultimately challenge for podiums during the course of the season. I’m especially looking forward to Thruxton next month. Obviously, it’s because it means we’re back racing again but it’s also my favourite track on the GT5 calendar simply because it’s soooooooo fast! My target for this season is to consistently finish in the top five along with some podiums and wins along the way hopefully. I’ve been out testing since March and will have had around seven test days by the time we go to Thruxton for the opening two races.

The major difference I’ve found between the Ginetta Junior and the Ginetta GT5 cars is the cornering speed – being able to carry a lot more speed through the corners. Both are powered by a 1.8-litre Ford engine but the GT5 is unrestricted and offers 55 more bhp (155bhp). It’s also 25kg lighter. Once the tyres are up to temperature after a couple of laps, it’s a really cool car to drive – as was the GJ car. In a straight line, you don’t notice the difference between the two that much.

I moved back to Italy full-time when I’d finished Year 8 at Monkton in 2018 and these days attend the International School of Florence. Next year I take my A-levels – six subjects – so that’ll be interesting combining everything. A daily fitness programme is required, even for racing a Ginetta, so that also keeps me busy outside of school and when I’m not in the Ginetta.

Unfortunately, the opening Thruxton race meeting (8/9 May) will be run behind closed doors and without spectators but you’ll be able to catch the action ‘live’ on ITV. Hopefully, restrictions will improve as the season goes forward and you’ll be able to come along and say hi in the paddock at one of the other six events. My next column will be just after Thruxton. Stay safe guys.

16-year-old about to start only my second season of car racing next month, competing in the Ginetta GT5 Challenge.
Articles

Who are DTM’s mid-season standout performers?

By Maurice Henry
4 Mins read
Maurice Henry talks about the opening races of the 2022 Ginetta Junior season and the progress he is making up the grid.