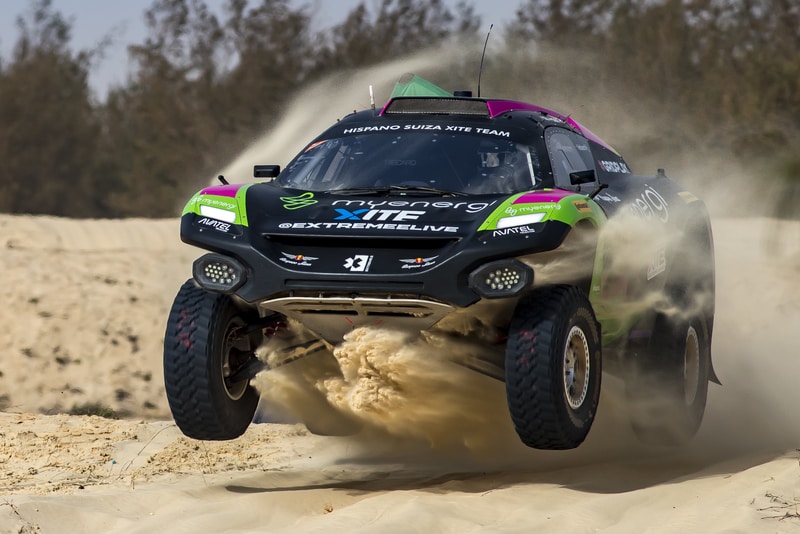 XITE Energy Racing teammates Oliver Bennett and Christine Giampaoli Zonca (GZ) had to be satisfied with their Ocean XPrix result as they narrowly missed a place in the final, but took points for a second top six-finish in a row.

In the semi final 2, the team was fighting against JBXE and Veloce Racing to secure fourth place. Unfortunately, a late pass by Veloce’s Stéphane Sarrazin meant Bennett and GZ finished sixth and missed the final.

“A fairly tough weekend here in Senegal,” Bennett said. “Getting the car dialled in the dunes wasn’t easy, but I think we’d got there in the end. When you’re racing through the dunes and on the sand, it’s so easy to push too hard and it can end in disaster.

“To be honest, getting the traction off the start line is a little bit of a lottery. The Odyssey 21 car delivers 100% power straight away and we’re accelerating on sand, so you’re constantly trying to feel for the grip and manage acceleration as well as traction.”

Bennett was in a close fight with Veloce’s Jamie Chadwick, trying to get alongside her but in the end she managed to be quicker than him. He admitted that racing in sand makes one of the biggest factors to complicate the overtake.

“Going into Turn One I was just behind Jamie. I came close to passing her a couple of times, but it’s so difficult when the sand is being literally kicked in your face.”

“It’s disappointing to have come so close to the final,” “But the way the team has worked with the car and the way GZ (Christine) and I have managed the weekend has been really good. Again, it’s been another super cool weekend with Extreme E.”

Bennett further confirmed that he has stepped up in his role in organisation and is XITE Energy Racing’s team owner, which explains the whole rebranding. Previously the team went racing under the name of Hispano Suiza XITE Energy Team.

Meanwhile, XITE Energy Racing’s team principal Javier Alonso felt that their team has improved throughout the weekend despite the edging results.

“We are so happy for the performance of the team. Of course it would have been great to be able to qualify for the final, but we were able to have some very close racing at the semifinal, both Oli and Christine performed great.”

He also appreciated GZ’s effort who went into a tight combat with Sarrazin, but the latter managed to muscle his way into second place.

“Chris was so close to overtake Sarrazin at the end of her lap, but unfortunately she couldn’t make it.

“In fact, we have gone from less to more during the weekend. Now we have to focus in order to be able to start next event in a better way, as it takes us more than some of the other teams to go fast on track.” Alonso said.

Usually write about anything motorsport with the lifelong affinity for energetic music and good foods.
Articles

By Adela
2 Mins read
An unexpected turnaround for Jamie Chadwick and Stéphane Sarrazin as they secured their first podium in Lac Rose.
Extreme E

By Adela
3 Mins read
Consistency and great skills of strength were shown by Sébastien Loeb and Cristina Gutiérrez, who are sitting comfortably in the top qualifying.