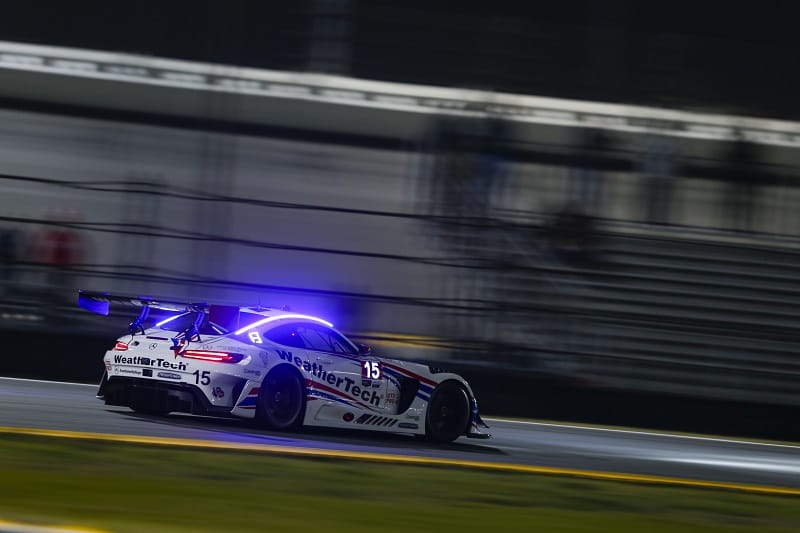 This weekend’s IMSA Rolex 24 Hours of Daytona is widely regarded as the start of the major American motorsport season, and drivers across a wide array of disciplines often show up for the famed endurance race. Of the sixty-one entries, however, only one has a full-time NASCAR driver.

Cup Series rookie Austin Cindric is entered in the GTD Pro class, sharing the #15 Mercedes-AMG GT3 of Proton Competition with Patrick Assenheimer and Dirk Müller. The son of Team Penske president Tim Cindric, he was previously a regular in what is now the IMSA Michelin Pilot Challenge; driving alongside current Xfinity Series driver Jade Buford, he became the series’ youngest race winner when he won at Mosport in 2015. His sports car background also included competing in the Pirelli World Challenge and historic motorsport.

Cindric eventually moved to stock cars, and his road racing experience came in handy as five of his thirteen career Xfinity victories came on road courses, as did his lone career Camping World Truck Series victory. When the 2020 Xfinity champion began dabbling in the Cup Series in 2021 for Penske, he saw much success on road courses as he qualified in the top five at Circuit of the Americas and Road America and led laps in both, followed by finishing ninth on the Indianapolis Road Course.

While Cindric is the lone full-timer, he is not the only driver with a significant number of NASCAR starts in 2021, though the other name came through bizarre circumstances. James Davison is in the #32 Mercedes-AMG GT3 Evo for Gilbert Korthoff Motorsports, which will compete in the GTD class, as a last-minute replacement for Guy Cosmo. Cosmo was abruptly released from the team after Sunday’s Motul 100 qualifying race: according to Cosmo, he took over the #32 from Mike Skeen shortly after inheriting the lead from those who pitted, then lost two spots on pit road to factory drivers; although the #32 finished sixth of twenty-one entries in the class, GKM’s owner Henry Gilbert pinned the lack of victory on him and fired him.

Davison therefore joins GKM in an unusual situation, set for his first IMSA start since 2017. He ran twenty Cup races for Rick Ware Racing in 2021 with a best finish of twenty-second at Martinsville in the spring, and also finished eighteenth as an Xfinity road ringer for B.J. McLeod Motorsports at Indianapolis. The Australian, who previously raced heavily in open-wheel and sports cars including the full 2014 WeatherTech SportsCar Championship for The Racer’s Group, has mainly competed in NASCAR since 2020. He has not revealed his 2022 plans.

While he is lumped in with the twelve NTT IndyCar Series drivers running the Rolex 24, Jimmie Johnson easily possesses the most decorated NASCAR background of the field. The seven-time Cup champion and new IndyCar full-timer is in the #48 DPi for Ally Cadillac alongside Kamui Kobayashi, José María López, and Mike Rockenfeller, and will run all four Michelin Endurance Cup races.

Other drivers with NASCAR experience in the grid are mainly road course ringers whom NASCAR teams entrusted with cars for such tracks. For example, Cadillac Racing‘s #01 DPi has Earl Bamber who ran the 2020 Xfinity race at the Daytona Road Course for Richard Childress Racing, but finished thirty-third after a wild late wreck.

In LMP3, Colin Braun will drive the #54 of CORE Autosport. The two-time Rolex 24 class champion was a Truck Series regular in 2008 and 2009 for now-RFK Racing, winning once at Michigan. His last stock car action came in the ARCA Menards Series in 2020 when he served as a relief driver for Sam Mayer at the Daytona Road Course.

Jack Hawksworth is in the #14 GTD Pro of Vasser Sullivan. He finished fifteenth in his lone NASCAR Xfinity Series start at Mid-Ohio in 2019 for Joe Gibbs Racing.

While more known for his Pirelli World Challenge and Trans-Am Series competition, Davison’s team-mate Skeen is also familiar with NASCAR as he made two Truck starts at Mosport in 2013 and 2020, as well as an Xfinity start at Watkins Glen in 2018. He attempted to qualify for the Indianapolis Xfinity race for JD Motorsports, but failed.

Magnus Racing’s #44 GTD has two NASCAR road ringers in Andy Lally and Spencer Pumpelly. Lally is certainly the most NASCAR-savvy of the bunch classified as ringers, running much of the 2011 Cup Series for TRG and winning Rookie of the Year. That year was his last in which he competed on an oval as every start since has come on road courses. In eighteen career Xfinity starts, all road races, he has nine top tens including two in 2021 for B.J. McLeod Motorsports. He was initially going to continue the schedule for Alpha Prime Racing in 2022 but left the team in early January.

Pumpelly débuted in NASCAR with a three-race Xfinity schedule in 2021 for JD Motorsports. After finishing ninteenth at COTA, his next two starts at Road America and Indianapolis ended with a wreck and mechanical issues. It was his first stock car race since finishing third in a 2009 ARCA race at New Jersey Motorsports Park.

Kenny Habul is the owner/driver of the #75 SunEnergy1 Racing GTD machine that finished second in class in 2021. The longtime GT driver was an Xfinity road ringer from 2012 to 2016 for his own team, Joe Gibbs Racing, and JR Motorsports, recording a best finish of fourteenth at Road America for JGR in 2014 and 2015. He also made a Truck Series oval start at Martinsville on his own, placing twenty-sixth.

The #99 GTD of Team Hardpoint has Katherine Legge, the only female driver in the race. She ran four Xfinity races for JDM in 2018, three of which were on road courses with a best finish of fourteenth at Road America. Her lone oval start was a twenty-eighth at Richmond.

While the ringers pump up the NASCAR presence, it might be disingenuous to include them as their races save for Lally are rare at best. Consequently, Cindric and Davison being the only ones with recent, substantial starts is a reduction from the four full-timers who ran the 2021.

So what gives? What happened to the likes of NASCAR’s current road course ace and 2020 Cup champion Chase Elliott or reigning Xfinity regular season champion A.J. Allmendinger? Cody Ware is more than familiar with sports cars, so where is he?

The decrease can be attributed to the regulars’ testing schedules being eaten up by preparation for the Cup Series’ new Next Gen car.

With only a week before the car debuts at the Busch Light Clash at the Los Angeles Memorial Coliseum, NASCAR has been keen on testing and ironing out as many kinks as possible, while drivers are hoping to familiarise themselves with the car to the best of their ability. Consequently and ironically, this meant the Next Gen car—which will be much more driver friendly on road courses with some elements resembling that of a touring car—prevented drivers from running sports car races. Hendrick Motorsports, who provides support to the #48 entry, fielded a pit crew for the Cadillac in the 2021 Rolex 24 to help them prepare for the Next Gen car’s single-lug-nut wheel.

Action Express Racing general manager Gary Nelson, whose team built and tested a Next Gen car in August 2020, told NBC Sports, “The NASCAR drivers that I’ve talked to, and I did talk to Chase about his thoughts of coming here, and I think those two things were pretty much the focus. They felt like they needed to have to get a championship season going with the new Next Gen NASCAR car, and the early season race in February at the L.A. Coliseum. It was hard to balance that schedule with the Rolex 24.”

Despite the lack of NASCAR regulars in the Rolex 24, a quartet of young Ford drivers ran Friday’s MPC race for PF Racing. Cindric teamed up with fellow Cup rookie Harrison Burton in the #4, while Cup Rookie of the Year Chase Briscoe partnered with Truck sophomore Hailie Deegan in the #42.

By Alice Holloway
1 Mins read
Joining the ranks of Toyota, Peugeot, Ferrari and Porsche, Lamborghini have announced they will launch a LMDh car to join the grid in 2024.
NASCAROff Road

By Justin Nguyen
3 Mins read
A short course off-road racing series on a quarter-mile paved oval track intended for stock cars? That’s what SODA did at Slinger Speedway. While SODA is only in its second year, Slinger’s interest in an off-road race dates way back.
NASCAR

By Justin Nguyen
1 Mins read
Chase Elliott, who won the 2021 Superstar Racing Experience season finale, will return for the 2022 finale at Sharon Speedway.