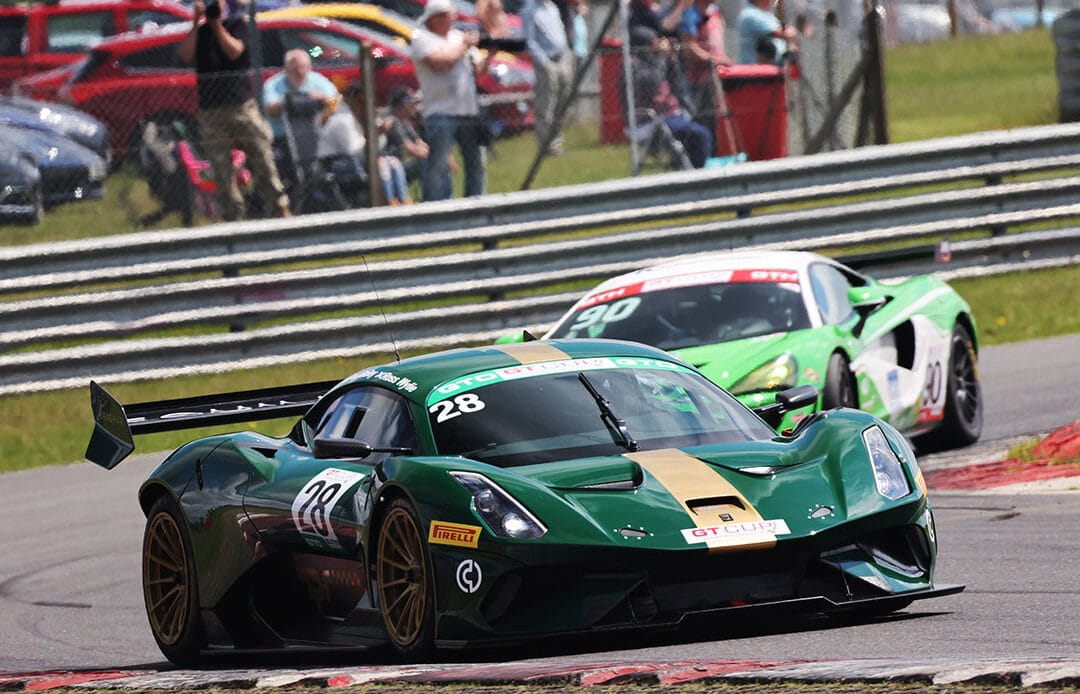 I’m delighted to be writing a monthly column for this website throughout the year. This is the first one and so I thought I’d tell you a bit about myself.

Being bought up in the Scottish countryside near Dumfries with nothing but fields and forests around me, my parents bought me a quad bike when I was three-years-old. I was always a bit of a nut when it came to anything with wheels and an engine. I wasn’t very good at football or golf, so I was always nagging them to get me into go kart racing.

I spent another three successful years in karts, before turning to car racing in 2012 – wow, cannot believe that’s 10 years ago! It was the natural progression for me, motorsport is an addiction, and I was well and truly hooked at an early age. It was very much a family sport and remains so for me to this day.

Coming from the Dumfries & Galloway region, when I was a young kid, I was always kind of star struck when I saw the likes of Allan McNish and David Coulthard on the television. I couldn’t quite believe that I had two mega stars on my doorstep. So that was inspiring which encouraged me to pursue a career in motorsport.

Having Allan [McNish] on the doorstep, his father Bert had the local BMW dealership and my parents were customers, so I think there was always a natural conversation to be had and having that access to a superstar of the sport was very encouraging. I guess that was a real motivation to push harder.

I have enjoyed, and still do to this day, had a great level of support from my parents. They completely dedicated their lives to chasing me around race tracks up and down the country. Certainly without my mum and dad, none of it would have been possible. Living near Dumfries, you can imagine the annual mileage they’ve accumulated attending race weekends across the length and breadth of the country.

I finished fifth in the 2012 Celtic Speed Mini Cooper Cup after six podium finishes including two wins. I was the Knockhill Young Saloon Car Driver of the Year and won the SMRC Ecurie Ecosse Hub Cap Trophy. The following year I was fifth in the Volkswagen Scirocco R-Cup after five podiums including a win in the Junior Cup and sixth in the Volkswagen UK Racing Cup VW Scirocco series scoring five podiums, including three wins. I was proud to be selected a BRDC “Rising Star” that year.

I won the British GT4 Championship in 2014, six podiums including three wins from eight races in an Aston Martin Vantage. I was an official McLaren GT “Young Driver” the following year, racing a 650S GT3 in the British GT Championship, finishing second in the Silver Cup and was also made up to a BRDC “SuperStar”.

I switched to a GT3 Aston Martin in 2016 and finished fifth in the Gulf 12 Hours GTX class driving a Porsche. I’ve enjoyed numerous success in the Britcar Endurance Championship, claiming the title outright driving a Ferrari 458 GT in 2017 after 10 overall podiums including four wins, the Sprint S1 class title in a Ferrari 458 GT3 after 13 class podiums/four class wins in 2018 and the C2 title in ‘20 – second overall after five overall podiums (F488).

I claimed my sixth career championship title last year by winning the GT Cup GTO Championship scoring nine GTO podiums including six victories in a variety of machinery that included a Ferrari 488, Brabham BT62 Competition & McLaren MP4-12C Can Am – I’m a very, very lucky boy being able to race these cars! The BRDC made me a Full Member last year and I’m very, very proud of this.

I’ve also been fortunate enough to compete in the Porsche Carrera Cup GB, finishing third in the Rookie Cup in 2017 before returning to the incredibly competitive one-make series for four races in ’19 prior to a full season in 2020 when I finished seventh having achieved nine top-six placings. I also had six races in the series last year.

I don’t think you ever forget your first race win and that was back in go karting at Rowrah in October 2005. Going on to win my first ever club championship, then the Scottish championship followed by the British championship which were all dreams coming true.

My first success in car racing in 2012 – getting that monkey off my back was pretty special and of course going on and winning a British championship title. There’s also lows in the sport which I often tell guys I’m coaching. But that’s what makes the good days sweeter.

Talking of coaching, I spend a lot of my time doing this these days, something I started in 2015 when I fled the nest in Scotland and headed south to live in Surrey when I was part of the McLaren Young Driver programme. Stepping away from my family was one thing but stepping away from the family business was even bigger because I had to get out there into the big world and earn a living for myself!

It is something I really enjoy doing. It’s rewarding and if you can actually teach somebody something that you’ve learned during your career, even from your mistakes over the years, then that is quite rewarding especially when you see someone putting it into practice.

I’ve also done some really cool stuff away from the racetrack. Working at Mercedes Benz World, McLaren Automotive, on Aston Martin’s driver programme plus work for other manufacturers like Alfa Romeo, Bentley, Lotus, Rolls Royce, Seat and Volkswagen. I have had the privilege to work with these great manufacturers and hopefully I will continue to do so in the future.

So far, I’ve got just the one race programme confirmed for this year. I’ll be out to successfully defend the GT Cup GTO Championship title in the Brabham and I’ll be keeping you updated on how things are going.

As you’ll know, motorsport is a very costly activity. I’ve never had masses of money to throw at my motor racing career but I’ve enjoyed support throughout my career from my family’s Carronbridge Sawmill. That said, I’ve also had great backing from Advance Construction Scotland, the Bell Group plus David Mason’s MacConnal-Mason Galleries – each of whom have helped me massively during my career.

By Griffin Schmoyer
5 Mins read
Mixed conditions meant chaos in the GMR Grand Prix, but also provided some rookies with career-best finishes. Let’s see how it all went down in this week’s Rookie Report.
European RallycrossFeatures

By Ben Huntley
3 Mins read
The 2022 FIA European Rallycross Championship gets underway with weekend in Hungary featuring a star-studded line up.
24 Hours of Le MansFeaturesFIA WECIMSA

By Alice Holloway
1 Mins read
Joining the ranks of Toyota, Peugeot, Ferrari and Porsche, Lamborghini have announced they will launch a LMDh car to join the grid in 2024.