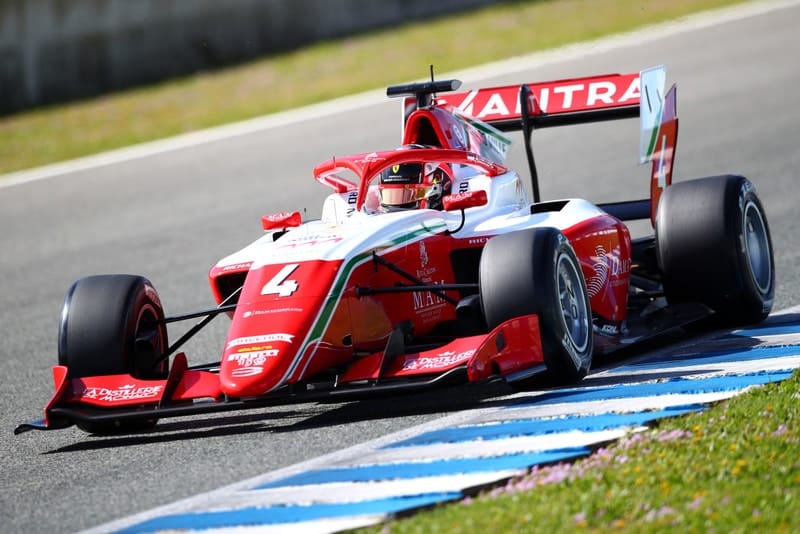 The weekend delivered the third and fourth winners from the first four races of the season, with Franco Colapinto and Roman Stanek taking Sprint and Feature Race honours.

Zane Maloney put his Trident on pole in a wet Friday qualifying session, while Colapinto qualified 12th and started from pole for Saturday’s Sprint Race.

Colapinto won his and Van Amersfoort Racing‘s first race since moving into FIA F3, surviving a race filled with safety cars to add a victory to his pole position in Bahrain.

Arthur Leclerc made another characteristic comeback after a collision with Enzo Trulli in qualifying, charging forward from 21st in both races.

He finished 14th in the Sprint Race and fourth in the Feature Race, elevating him to 36 points, level with Victor Martins at the top of the Drivers’ Championship.

Roman Stanek’s first FIA F3 win came after his Trident team-mate Maloney spun while preparing to lead the field away from a safety car restart.

He suffered punctures in both races in Bahrain, but now sits third in the standings, ahead of double podium-finisher Jak Crawford and Isack Hadjar.

Colapinto heads to Circuit de Barcelona-Catalunya sixth after his first win, ahead of Oliver Bearman who received a 20-second penalty for a collision with Gregoire Saucy on the final lap, dropping from second to 18th.

Saucy is eighth, ahead of Maloney and Juan Manuel Correa, who missed Imola due to a stress fracture in his foot.

By Michael Callander
2 Mins read
Victor Martins replicated his Bahrain record of winning the FIA F3 Feature Race after retiring from the Sprint Race as he re-took the Championship lead in Barcelona on Sunday.
Formula 3

By Michael Callander
2 Mins read
Roman Stanek will start from pole in the F3 Feature Race, while David Vidales benefits from Zane Maloney’s penalty to line up first for Saturday’s Sprint Race.