The first competitive track time for the 61 car 24 Hours field saw a wet circuit around the Bridge layout of the Northamptonshire track, but at a lull in the worst of the weather times fell in the closing half hour of the session.

The Aquila – that in Phil Bennett, Kelvin Burt and Huff sports almost certainly the best driver line-up in the race – was the first to bring the times down, finding almost five seconds to move from a 2:16.305 to an almost unbeatable 2:11.699 with 25 minutes remaining.

The stiffest competition came from Calum Lockie in the no.4 Mosler – one of four in the race. He beat the provisional pole by the slenderest of margins – just one-thousandth of a second – but was unable to improve, the driver describing after the session how a combination of the ever changing conditions and yellow flags around the track stopped any attempt to improve.

Huff and the Aquila had no problem, taking another half second off their time to set a time of 2:11.149 to take pole – albeit provisionally, though conditions look likely to make the second, night qualifying session the slower of the two.

Lockie's time remained good enough for second place, ahead of the no.2 Eclipse Motorsport Mosler in third. The Rollcentre Racing Mosler – driven by Martin Short, BTCC racer Andy Neate and Stephen Quick – finished ninth fastest overall, despite having spent much of the session without being credited with a completed lap.

Unsurprisingly the internationally flavoured Jet Alliance Porsche was the fastest Class 2 (1:13.435) car in the hands of Marco Seefield ahead of a pair of Marcos Mantis entered by Chesterton Competition Holdings and Topcat Racing respectively. 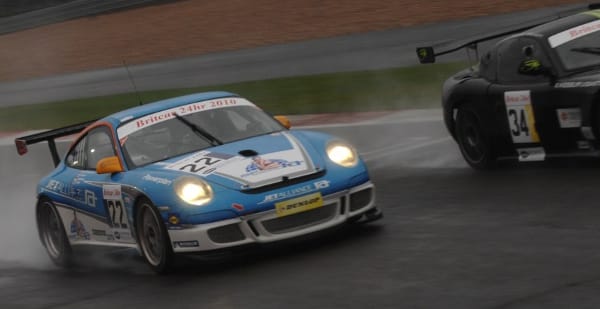 The Jet Alliance Porsche on the main straight

In Class 3 (or GT4 if you prefer) the efforts of major teams in Aston Martins, Lotuses and Nissans were upstaged by the no.42 Porsche 996 GT3 Cup. The car entered under the banner of Neil Garner Motorsport/Hawthorns has a six-man driver line-up of Spaniards Javier Morcillo, Manuel Cintrano and Oliver Campos Hull plus Brits Jay Shepherd and Rod Barrett and Dutchman Jan Persson.

The Team Lotus Evora GT4 was second fastest and the AMR Jota Sport N24 GT4 fourth in class, behind the Intersport BMW M3, with former BTCC driver Mike Jordan amongst the drivers. 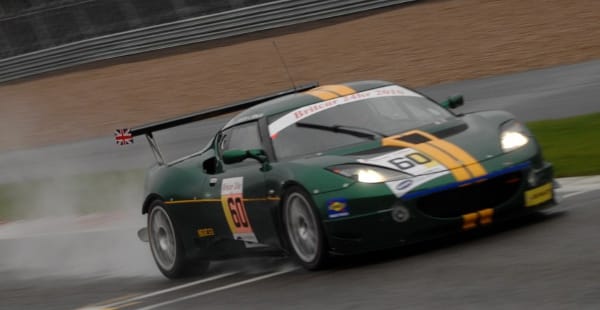 The Production Class was paced comfortably by the BPM Racing SEAT Leon Supercopa, their 2:22.062 over four seconds faster than the Honda Civic Type R of Synchro Motorsport. The Team LNT Ginetta G40 – which was intended to be driven to and from the track, as well as raced – was third in class after being another car to improve greatly in the second half of the session, taking nine seconds off their time to end with a 2:27.152.