As the race approached midnight, the class 2 Jet Alliance Porsche was still flying. Reeling in the lead car, the class 1 MJC Ferrari, it took the lead as the clock struck 12. The weather still treacherous and causing more trouble meant Aaron Scott had to bring in the Jemco Racing Ginetta G50 as the windscreen had misted up and he couldn't see. Also, the Chesterton Marcos Mantis was bought in and parked up as they had decided the conditions were too bad to race in and it wasn't worth risking a huge accident.

Lady luck was with the Chesterton team though as just minutes later, the safety car was deployed thanks to the terrible conditions on track. They then went back out and joined the snake as the cars trundled round hoping for the rain to ease.

Earlier we spoke to Rob Barrett, driver of the number 42 Neil Garner Motorsport Porsche 996 GT3 who at the time of the safety car being deployed was lying in third overall and first in class 3. He told us, “Bearing in mind we had a penalty for too many mechanics around the car which is a stop and go and we had to change a tyre because we had an incident with a Lotus it's not too bad and we're not even a quarter of the way into the race.” He then said, “If we can stay in the top eight to ten then by the time we get to 20 hours the we should be really starting to get excited” 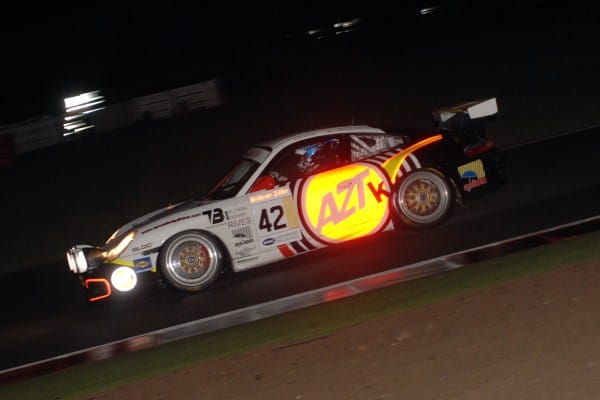 During the safety car period, the Rollcentre Mosler was seen being pushed down the pit lane to its garage after cutting out on the pit lane entrance. A recurrence of an ongoing problem the team are experiencing it seems.

At 12:50 am the Safety headed back in thanks to the conditions easing after 45 minutes on track and racing was back underway with the number 22 Jet Alliance Porsche leading the field. Soon after there is a change of lead in class 3 and third overall as the Intersport BMW M3 with Mike Jordan at the wheel passed the Neil Garner Motorsport Porsche 996 GT3.  It is some battle between the two teams, as I finish this report, the Porsche retakes the class lead as Jordan brings the BMW into the pits.

More bad news for Aquila at ten past one this morning, after spending so much time in the pits before rejoining, the car disappears.  There is some confusion as no one seems to know where it is, not even the team!  But to some relief, after seven or eight laps, the car arrives in the pit lane on the back of a flat bed lorry.

The second place class 4 car, Chimp Tune Racing's Lotus Elise received a 1 lap penalty for exceeding the pit lane speed limit, something which is being strictly applied due to the huge number of competitors and the amount of people milling around.  However, soon after the Lotus was pushed down the pit lane with possible mechanical issues.  This now hands second place in the class to the Mardi Gras Honda Integra.