Moslers swapped the fastest time at the end of the session but both fell short of besting the fastest time of the morning's day qualifying meaning the Aquila CR1 will start from pole when the endurance event gets underway at 4:30pm Saturday.

An afternoon of near constant rain had all but made the fastest times impossible, most teams opting to simply qualifying their drivers – all drivers must complete three laps in the dark to be allowed into the race – and adjusting their cars to night running – several teams adjusting their lights throughout the night's running. 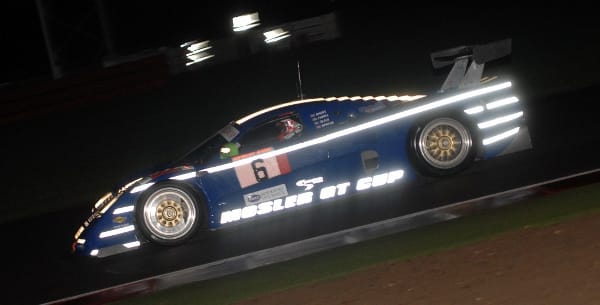 The two hours were not without incident. The Morgan Plus 8 of Keith Ahlers and Christian and Michael Bock spent time in the gravel – briefly jeopardising the chances of both German drivers qualifying. There was also trouble for the all-German Tischer Motorsport team running a BMW M3, as their entry was towed back into the pits.

However, the scariest moment was reserved for the no.82 Lotus Elise of Chimp Tune Racing which came to dramatic halt drivers' left in the pit straight after a brief fire lit up the Northamptonshire night.

The Eclipse Motorsport Mosler of McInerneys Michael and Sean together with Phil Keen looked set to put up the fastest time of the session, Keen's 2:13.250 standing proud until the final lap when Jon Barnes in the Rollcentre Mosler lapped the drying track in 2:12.001 to steal top honours.

The achievement came at the end of a day of delays for Martin Short's squad, having struggled with the new spec-Mosler brought in for the event as the team tried to set up for the wet running that characterised the day (and looks set to continue for much of the weekend).

Elsewhere in the classes it was the same suspects as had dominated the earlier sessions. The Jet Alliance Porsche was once more fastest of the GT3 cars, though some two seconds slower then their daylight marker. The Marcos Mantises of the Chesterton and Topcat Racing teams were second and third again, the latter someway adrift in the overall standings in 16th.

In the wet and the dark it was the GT4 that showed the best consistent pace, running the fastest laps of the session during the opening minutes before the higher-spec machinery took charge. The session set up the possibility of a four way battle for class honours, the Team Lotus Evora GT4 setting the best time (2:16.819) ahead of the no.42 Porsche – a team which includes three former champions in its sextet of wheelmen in second. The RJN Motorsports Nissan was third fastest among the class and the Jota Sport Aston fourth. 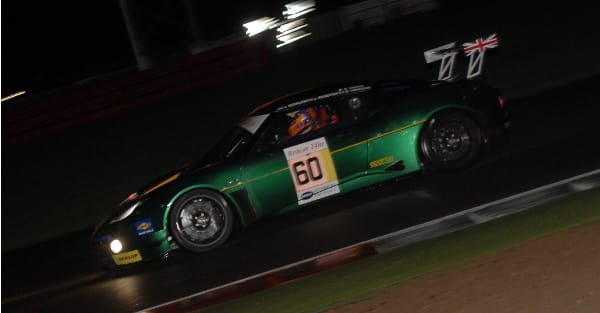 The Production runners were, again, easily led by the BPM Racing Limited Leon Supercopa with a time of 2:24.395 in 18th place overall – three seconds and 11 places in the standings better than the works Ginetta driven by Lawrence Tomlinson, Mike Simpson, Stewart Linn and Nigel Moore.