Witt Gamski, Keith Robinson and MJC Ltd kept up their perfect Britcar season with a commanding win in the day-to-night race at Donington Park.

The pair's Ferrari, however, faced extra opposition in the shape of two teams returning to the championship. Michael Millard and Ian Heward entered with a fast, yet fragile LM3000 machine, while Phil Dryburgh and John Gaw – who had joined forces with the MJC squad for last month's Britcar 24 Hours – entered in their Kinfaun Racing Porsche 997 for the first time this year.

And it was these two returnees who had the early pace. Gamski had taken his normal role in starting the MJC challenge but found himself deposed by Millard into Redgate at turn one and shuffled back to sixth by the end of the first lap after what he called a “nightmare” start in a car notoriously tricky on cold tyres.

Millard's lead lasted only a lap before Gaw assumed the lead – again at Redgate – at the start of the second lap. Others were not enjoying the opening laps of the race so much.

Production Class Two runner Gary Furst pulled his Mitsubishi Evo 9 off to drivers' right on the pit straight while Mikey Brown's Barwell Motorsport Ginetta G50 was punted into the gravel at the Goddards Chicane by a production class BMW.

“We were certainly lucky because the BMW was out of control,” said Barwell team boss Mark Lemmer, who was also driving a second entry for the team. “[He] came past us, it could easily have been us that it took out, but he was so out of control that he shot past us and took the other car out.”

The safety car was also bad news for Gamski. His cold tyre related struggles had seen him fall back and when the safety car joined the track it did so in the space between sixth placed Gamski and Chris Headlam, running in fifth in the Lotus Elise he shared with British GT G4 class champion Jamie Stanley.

Thus when the race restarted it did so with Gamski clinging to the lead lap by just 16 seconds. The inevitable happened just a handful of laps later Gaw putting a lap on the his friend and 24 hour teammate.

The relationship between the two teams from their Silverstone victory remained. The pair inhabited adjacent garages in the pitlane and not only were Gaw and Dryburgh's names still on the door of the Ferrari but the drivers still had their radios on the same frequency. So it was, according to Gaw, that when Gamski – Ferrari now at operating temperature and formidable speed – came to unlap himself Gaw was able to tell him where to make the pass – on the inside on the straight. 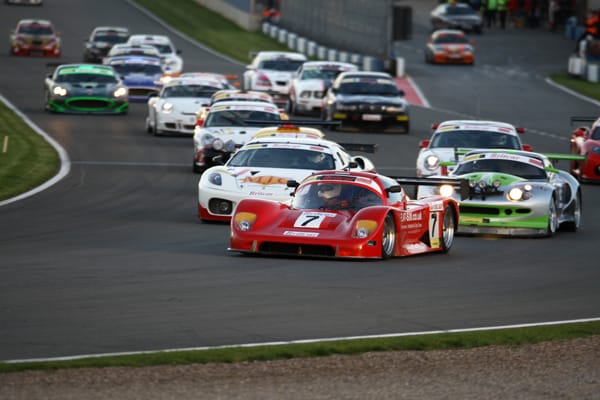 Heward/Millard LM3000 leads into turn one. The lead would last 1 lap, the car would last 27 before retiring

That still left the championship leaders with a mountain to climb that only seemed steeper when Gamski handed the car to Keith Robinson in the first pitstop before many of the front runners shortly before the hour mark. The pitstop, however, proved to be the beginning of the MJC recovery. Now at the wheel Keith Robinson put in a scintillating succession of fastest laps as twilight succumbed to the night – culminating in fastest lap to 1:08.493 on lap 110. The laps proved crucial once the others made their stops.

Gaw was the next of the leaders to pit, the Kinfaun boys suffering a frustrating stop. “We lost a lap on the pitstop unfortunately,” Gaw said afterwards. “It was quite handy we came and there was a safety car just after we came in so it was quite nice, but the belts – it's just dark in there isn't it. And the belts got tangled up and they couldn't get the belts done up.”

“There's quite a big difference between Phil and me sizewise, so the belts have all got to be loosened for Phil and then one just went in the wrong way. I don't know if we would have got out before the red light,” he added.

The hold at the end of the pitlane compounded the problems, caught as the safety car came out as they pitted for a stranded Seat at Goddards. Gaw had been luck, coming into seconds before the safety car was scrambled and so escaping the Britcar rule which only allows 25 litres of fuel (half a normal stop) to be added in stops taken fully under safety car conditions.

The stop dropped them to third, behind Robinson in the Ferrari for the first time with Raphael Fiorentino leading in the Topcats Racing Marcos Mantis, still yet to stop.

The Seat that had found the Goddards gravel was the Sibsport Performance car, driven by Gary Robertshaw. Robertshaw had been running third in the Production 1 class as the 90 minute production race entered its closing 10 minute. With them out of the running it allowed the Cunninghams – Mark and Peter – to step up onto the podium of the class behind the Eurotech Racing Mustang of former BTCC driver Mike Jordan and Steve Wood and the JC Racing BMW M3 of Mark Smith and David Cuff.

The results for both the first and second placed cars came at the end of a difficult weekend. The Mustang had suffered a day of truncated running, highlighted (or lowlighted) by a qualifying session ended in the gravel after a Wood mistake. The winning BMW – an ex-Andy Priaulx WTCC car – had had the engine out the day before. 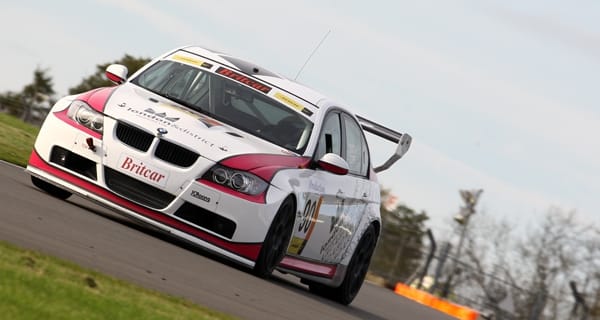 Mark Smith said after the race. “We thought the engine had seized but the ring gear had come out and squeezed itself onto the block but we didn't know that until we had the engine out and the whole car was in bits. So it was some result from where we were yesterday.”

Their troubles continued on race day, a leaking CV joint dumping oil onto the car's left-rear tyre. “I thought it was either my driving,” Smith said. “Or that the tyre had gone off and then David got in the car and experienced the same problem.”

“[It was] drivable, yea. It was bit scary,” he admitted. “I had a few moments when I was out there and I thought, 'oh, I fancy coming in for a driver change now'.”

The safety car bunched up the Production Two class, putting David Green in the Bullrun Seat onto the tail of their title rivals ING Sport – Anthony Wilds bringing their BMW home. It was a familiar scenario for Green and teammate Richard Adams, as the latter explains. “We thought we were going to get caught with the safety car again coming out with fifteen minutes to go, that happened at Rockingham when we were in second.”

Instead of the safety car staying out until the end of the race – as happened at Rockingham – the production race restarted with seven minutes to go, allowing Green one more chance at taking the lead after the restart – a chance he took in superb fashion sliding down the inside through the Craner Curves.

“We'd been focussed on them all weekend,” Adams said of their title rivals. “Looking at their times, seeing how they're doing in qualifying and in the night time – which of their drivers were going first so we were fully aware of what they were doing and had a clear plan. The car was faultless, the plan was faultless.” 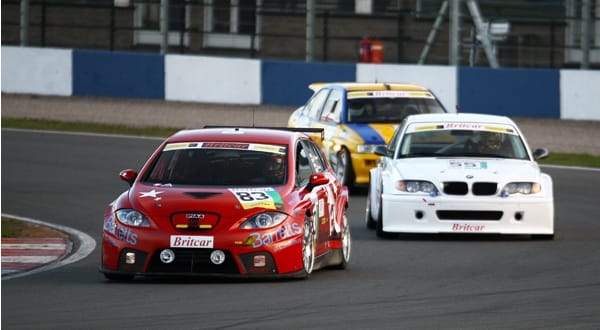 Under current Britcar rules the production race runs concurrently with the GT event, the Production runners flagged off the track after 90 minutes, the GT race carrying on around them – an arrangement that will have to stop when the GT classes run under MSA sanctioning next year.

When Raphael Fiorentino bought the no.26 Topcats Marcos in just as the production race was drawing to a close it was a rapid Robinson who took the lead, never to surrender it. Within 30 minutes Robinson had a three lap lead over the Marcos – now in the hands of Neil Huggins. Huggins, in fairness didn't have the pace of his teammate and he slipped behind the Kinfaun Porsche for second, falling back by at least two seconds a lap. Their poor luck would continue in the closing minutes of the race when a left-front puncture brought Huggins in for a late stop, though the separation – a lap – saw them hold third ahead of the surviving Barwell G50. Ben de Zille Butler had been the last of the field in the heroically economically Ginetta running as an invitation entry in GT Class Three.

Another late stopper was the Eurotech Porsche of Morgan, Philip and Gareth Jones – cousins – though they were not so lucky, pitting 40 seconds too late and falling foul of the prohibition on refuelling in the final fifteen minutes. The penalty saw them docked two laps – to add to the single penalty lap they had picked up on their first stop – and drop from fourth to sixth. It was scant reward for a race where they had been as high as third, having battled with Fiorentino's Marcos for much of the first hour.

The penalty dropped them behind the no.41 Porsche of Javier Morcillo and Manuel Cintrano who took second in GT Three behind the De Zille Butler/Lemmer Ginetta.

Paul Bailey and Andy Schulz finished seventh in their Challenge-spec Ferrari 430, Owen O'Neill and Sam Head were eighth in another Topcats Marcos. Both the Orbital Sound Lotus Elise and GTF Racing TVR Sagaris suffered troubled races with multiple problems. The self-built TVR fell just short of the number of laps needed to be classified while the Elise held on for tenth, one place behind the BPM Racing Seat – the only production car to take the option of continuing after their own race had finished – joining GT Three.

“The only way we could have had good fortune in this race would have been at MJC's misfortune, and that's the last thing we wanted for our friends,” said Phil Dryburgh after the podium celebrations. “All we need now is a faster car. Getting back into the Porsche after driving the Ferrari at Silverstone felt so slow.”

Keith Robinson dedicated the win to his friend and mentor Mike Bray, who is terminally ill. “He guided me through my early years in endurance karting, and was even on the phone to me all through the Britcar 24hrs, giving encouragement,” he said.

The win leaves MJC only needing a win at the finale at Brands Hatch on November 13 to complete the perfect season. The celebrations went on at Donington, however, 'We Are The Champions' emanating from the shared Kinfaun and MJC garage before one member of each team performed a streak along the pitlane, Gaw on hand with the champagne to complete the moment.

Not that kind of streak! A car heads for the Craner Curves in the gathering gloom