The 2011 Avon Tyres British GT Championship will bring a bumper grid of the world's finest GT3-spec sportscars to the grid, and after an off season full of only good news, an exceptionally late Easter had made us wait until nearly May to get our first sample of the sensory battery the championship will feature.

Only a few years after the series was struggling to muster grids in double figures this weekend's Oulton Park season premier will feature as many as 14 different models of car from ten different manufacturers spread across four classes.

The entry list is enough to put a smile on the face of any GT racing fan.

In the flagship GT3 category defending champion David Ashburn returns with the Trackspeed squad to defend the title, ably assisted, when international racing commitments allow, by Richard Westbrook. The series' only Porsche outfit expands to a two car operation on a full term basis. Gregor Fisken joins the team from Martin Short's Mosler squad, with Tim Bridgman selected from a top quality list of auditioning drivers to complete the team

The presence of Bridgman and Westbrook, a former FIA GT champion – who joined the Trackspeed crew for the longer races in 2010 – is typical of a championship that now more than ever seems to have to the power to attract big names – in terms of teams and drivers.

Though he has been a fixture in the British GT paddock for many years, Allan Simonsen will again bring international pedigree to the Rosso Verde Ferrari he shares with Hector Lester. A stunning stint by the Dane – fighting from a lap behind – at Donington Park to claim the race win in the 2010 season finale was illustration of his undoubted pace, but he was too often Lester was outrun by the increasingly professional drivers elsewhere on the grid.

After a busy twelve months of international racing United Autosports will run a pair of Audi R8 LMS in the full season this year, after only running in the first round a year ago. The team improved throughout 2010 in Europe with the Audi and further work over the off-season should put the driving team – which features Matt Bell and ex-BTCC driver John Bintcliffe – in the competitive battle at the front of the field. 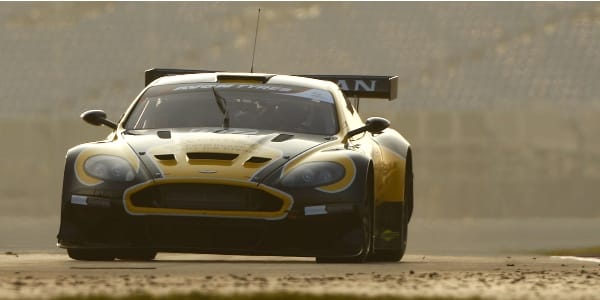 CRS Racing also return to national racing this year – running in the British GT championship in parallel with its Le Mans Series and Intercontinental Le Mans Cup campaigns. Andrew Kirkaldy's team are, perhaps, pre-season favourites for the title – based mainly on the team's level of experience, though the driving quartet lined up for the team have the abilty to live up to the expectation.

Glynn Geddie, the Aberdeen racer who was in no small part responsible for Ashburn's title, switches to Ferrari for 2011, co-driving with father Jim. Meanwhile in the other car Alex Mortimer – lately seen in the family team run RPM Motorsport Ford GT – combines with Andrew Tate in another potential race winning entry from CRS. Mortimer, incidentally, has not ruled out the Ford GT making occasional appearances in the British GT paddock, though he will not be among the drivers.

CRS Racing are one of a number of teams set to bring a Ferrari 458 to the tracks of Britain this year – though they are to start the season with a pair of 430 Scuderia cars before introducing the new car soon after.

MTECH – race winners and 2010 most persistent title challengers – will start the season with one of Ferrari's new racers for Matt Griffin and Duncan Cameron to form a team that could fight for the title if they can adapt to the significant step forward the 458 represents. Charles Bateman and Michael Lyons will also be piloting a new Ferrari for new team Scuderia Vittoria.

Also new to the British GT grid will be the burbling, gullwinged, Mercedes SLS. After a massively frustrating year with the aging Ascari KZR1 last season 2009 champions Godfrey and David Jones have opted to bring the latest Mercedes GT machinery to the championship. As another new car the potential for teething problems is ever present, but having run well, and consistently in what little testing they’ve done the twins seem well equipped to rebound in 2011.

2009 champions Godfrey and David Jones in the striking Mercedes SLS

Doing battle with the Merc on the track and in the unmistakable engine noise stakes is the Chevrolet Corvette.

Incredibly when Speedworks driver Piers and Ron Johnson – not related – take the green flag in Cheshire it will be first British GT race for the successful GT3 version of the quintessential American sportscar – which also happens to be the reigning champion car in the FIA GT3 European Championship. However, whether Speedworks – last season’s GT4 winners – can bring this form to Britain with two drivers relatively inexperienced at this level, and in a series as packed with talent as 2011’s grid, is doubtful.

Ginetta – a name familiar to UK racing fans – is a name relatively unfamiliar to GT3 class racing. However, with the new G55 homologated for the class Oulton Park could welcome four of the new cars for a canon of top Ginetta peddlers including Colin White and GT Supercup dominator (to date) Tom Sharp, tantalisingly paired in a Team LNT entered car.

GT4 has, until now, been the traditional home of the Ginetta brand in British GT, and though the G50 that has been the benchmark in the class will once more figure in the class, the depth in the lower class too is better than ever.

Two works-supported Lotus Evora join the championship, with two KTM X-Bow also due for the season. The Evora is a largely unproven commodity, but the X-Bow has shown very well in previous outings, Michael Mallock and Athanasios Ladas sweeping both races at Rockingham last year. The pair will join up to try and repeat those results this season.

Underwhelming small entries are expected for both the GT3B class – for older spec cars – and the GTC class, where BTCC legend Anthony Reid and Jordan Witt will share a Chevron GR8. However, the Chevron's one off appearance at the end of 2010 proved that if they lack the competition in their own class, they can fight the cars in the top class.

British GT engines roar for the first time competitively for qualifying at Oulton Park on April 23, with the first races of the season following on April 25, including the first look at how new regulations impact on the racing across the two hour long engagements.