Sorry I have taken so long to write this blog, but not getting home until 5am on the Monday after Knockhill and then having to work the rest of the week, I have been somewhat shattered and busy, so here goes.

After securing the necessary funding two weeks before Knockhill, it felt very strange to know so far in advance that we would be racing. I cannot thank Matthew Kirby enough for his extremely generous support to help me to compete. With my team-mate Alistair not racing at Knockhill, it was a skeleton of a Plans Motorsport team that made the long trip up north. We ran out of our 7.5-ton truck and two E-Zup awnings, with mum as head of the catering department!

The first practice session on Friday morning was wet – conditions I love. We were quickest straightaway, and it was a real morale-booster after our nightmare of a Snetterton weekend to see that we finally had our pace back. The second and third sessions were dry, but even on old rubber, we were still on the pace – although after our speed in the wet conditions, we were very much hoping for the typical Scottish weather to hit over the weekend! We awoke on Saturday morning to realise our prayers had been answered, and with clouds covering the hill, the locals informed us that more rain was on its way. At this rate, we thought we would need a keel and sail rather than wet tyres!

We went out for qualifying, and I knew immediately that my Plans Motorsport car was set up fantastically for the conditions. It was then a question of waiting for the others to show their true pace and for me to show mine. So long as I had a clear lap I knew I could get pole position, and with one minute left showing on my pit board I knew it was time. As the chequered flag fell, I knew I had done a good lap, but was it enough? Driving down the pit-lane to conclude the session, I saw the guys cheering and knew straightaway…touch! That made it six poles out of seven attempts this season – not too bad a statistic! 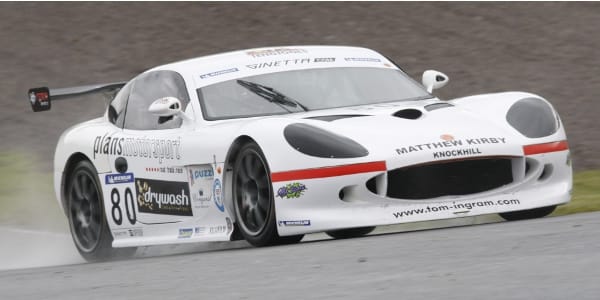 Driving in the wet - "conditions I love"

Going into the first race, I knew I just had to beat my closest rival Jody Fannin to begin extending my championship lead again, which I managed to do. After battling against very bad braking problems throughout, I was happy to bring the car home in third place.

In race two, I repeated that result, but still with braking issues. I subsequently put my National College for Motorsport knowledge to good use to help the team to discover what the problems were, and we were confident for the final race that now we had found the cause, the car would be back to how it should be – being able to slow down!

Starting from third in the G50 class, I made a good getaway and set about catching second-placed man Aaron Williamson and putting him under pressure. I was just about to make my move when the safety car was called due to the stricken G55 of Carl Breeze. After a couple of laps behind the safety car, the lights went out and the leader bolted very early, running wide into the last hairpin and allowing the chasing pack to file past. That left me right on the back of my main title rival Jody Fannin, and I tried to put him under pressure, too – and as the recovering Colin White sent it up the inside of me into the last hairpin in his G55, he ran on and also overtook Jody, leaving a G50-sized gap for me to slot into!

I then focussed on chasing down the leader Williamson, who was about two-and-a-half seconds ahead. I managed to close the gap within a few laps and wasted no time in getting past him, going up the inside into the last hairpin – although he certainly did not make it easy for me, squeezing me right over to the white line. I knew I was going to struggle to slow the car down enough, so I had to draw upon some of my karting experience to get it stopped on the apex and block his cutback.

I was now in the class lead and set about putting in some consistent lap times and being as smooth as possible so as not to make any mistakes and to pull out a safety margin. I held the lead right to the end, allowing a couple of G55s to come through along the way as I didn't want to take any risks. When I saw the chequered flag about to be dropped by Dorothy, I exploded with emotion like I had never won a race before. It had been so long since I'd last won that I'd forgotten how it felt to hear my name shouted out by Alan Hyde. Good old Alan…

That means I have extended my championship lead to nine points heading into the next round at Rockingham this weekend, and I would like to thank Del Boy and Gaenor for the special champagne on the podium, as well as saying a huge 'thank you' to Matt and Mike from Plans Motorsport, Joe Tanner – and Matt and Rich from Hillspeed for giving me the kick-up-the-a**e that I needed!

Hope to see a lot of you at Rockingham, and if you are not doing so already, you can follow me on Twitter at @TomIngram80 and keep up-to-date through my website www.tom-ingram.com.