Lewis Hamilton said that his McLaren team are ‘looking strong’ for the Brazilian Grand Prix after he set the fastest lap during Friday practice today in Interlagos.

The Brit, who is sporting a helmet design based on that of Ayrton Senna this weekend, said that his car also seemed competitive long runs today.

“The car felt really good today- on both high and low fuel,” said Hamilton. “And degradation on the new Option tyre seems pretty acceptable; I was still doing decent times at the end of my run. I think there's still a bit more to come, but we're looking strong for the rest of the weekend.

“I also felt quite comfortable with the set-up changes we made going into this afternoon's session, and our long runs seem to be pretty competitive too. You never know what the Red Bulls are doing, but I'm comfortable that we're there or thereabouts. 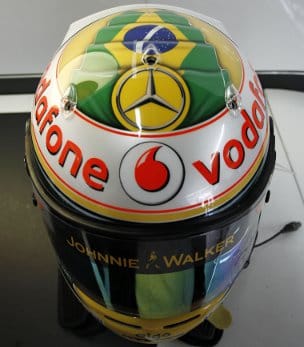 “On other subjects, for Brazil this weekend I wanted to create and wear a special helmet utilising Ayrton Senna's design – I asked Ayrton's sister, Viviane, if I could use it, and she said yes.

“It's my helmet design on the front and Ayrton's on the back. I used the green lining that Ayrton used on his helmet too – I had to order that especially. It's a very special edition, it's a real honour to be able to wear it, and hopefully we'll raise some money for the Senna Foundation too.”

Button was not quite as happy with his car today, coming seventh in the afternoon session.

“The two tyre compounds we're using this weekend are closer to each other than we'd expected,” explained the Brit. “The Prime is working well, and I think we understand where we are with it, but I'm struggling a little with the Option. I couldn't quite get a balance on either low-fuel or long-run – it just wasn't really working with my set-up.

“Happily, we know some of the reasons for that – we just didn't have time to try those solutions today. But we've made the soft tyre work all year, so I'm confident we'll get it right tomorrow.

“Still, it's forecast to be wet on Sunday. Having said that, you never quite know what the weather will do around here, so it would be a bit of a risk to run a full wet set-up. I don't think there will be too many people at the front setting their cars up for the wet, for that reason.

“The DRS zone is along a very short straight, so I think we're going to struggle to overtake there; but we've still got the main straight, which is probably the best place to pass.”

McLaren team principal Martin Whitmarsh is confident of having a good weekend here in Brazil, but is wary of rain, which is forecast for qualifying tomorrow.

“It's always a pleasure to come to Brazil: the people here live and breathe Formula 1 – and rightly so, for their country has produced some of the greatest and most legendary drivers in grand prix history,” he said.

“The challenge of Interlagos never diminishes – it really is one of the giants of our sport – and our engineers and drivers relish the challenge of taming such a tricky, unpredictable and idiosyncratic course.

“Today, I think both Lewis and Jenson proved that our car works extremely well on the Prime tyre. The performance differential between the Prime and the Option is relatively small this weekend – as a result of Pirelli's bringing a new soft tyre for the weekend – and Jenson wasn't quite able to extract the full potential from the Option. But we're confident that we can make the necessary changes to his car this evening, and that should leave us in a strong position for the morrow.

“As always in Sao Paulo, the weather threatens to play a greater part in proceedings over the next few days; but, for the moment, the sun is shining, we're pleased with the progress we've made, and we're confident in the direction we've chosen for the rest of the weekend.”

By Paolo Iantosca
3 Mins read
The 2020 F1 season is set to go down as Ferrari’s worst campaign in the last century. However, despite the dreadful results, Ferrari still managed some highs in a unique 2020 season.
Formula 1Season Review

By Jasmine Butler
3 Mins read
Renault DP World F1 Team had podium glory for the first time in over nine years in an impressive 2020 for the team.
FeaturesFIA WECFormula 1IndyCarRally