Williams Confirm Maldonado for 2012 with Bottas as Reserve Driver

Williams have this evening confirmed that Pastor Maldonado will remain with the team for a second season.

The 2010 GP2 champion, who scored just one point in his debut Formula 1 season, will race for the Grove-based team in 2012.

The team have also announced that Valtteri Bottas has been promoted into the reserve driver role.

“Pastor has proven this year that he is not only quick but also that he is able to maintain a consistent and strong race pace,” said Sir Frank Williams, explaining why Maldonado had been retained. “Pastor has been responsible for all of our forays into Q3 in 2011 and his race at Monaco was outstanding.  Pastor has also settled into the team at Williams very well, contributing strongly in the factory and with our partners. He will play a critical role in 2012 as we rebuild the team and move forward.”

Maldonado was obviously very pleased to be given another season with Williams, and hopes that 2012 will not prove as difficult as his debut season.

“I am delighted to be able to continue with Williams into my second season and I will give my very best to help the team as we push to return to the front of the grid,” said the Venezuelan. “This has been a tough season for the whole team but it has given me personally the opportunity to learn and develop. I am convinced that the steps we have taken to improve our competitiveness will bear fruit in 2012 and beyond. I am thrilled to be part of that and also to represent the people of Venezuela in Formula One.” 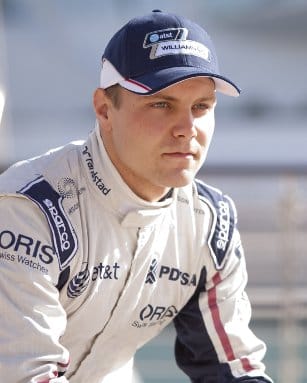 Finnish driver Valtteri Bottas has been promoted to the role of reserve driver at Williams for 2012 - Photo Credit: Alastair Staley/LAT Photographic

Frank Williams also explained why Bottas had been selected for the reserve driver role: “We have a very specific approach to young driver development, working with one highly talented individual over a period of years,” said the eponymous team principal. “Valtteri has proved a very capable and rounded young man of fierce determination. As the team's Reserve Driver, we anticipate that Valtteri will participate in a Friday practice session at 15 Grands Prix next year, most likely with a more experienced driver taking over for the remainder of the race weekend.  We will announce the identity of that driver in due course.”

“I would like to thank Frank Williams and the whole team for the investment that everyone at Williams has made to help me over the past two years,” added Bottas. “The opportunity now to continue this unique development with the position of Reserve Driver will enable me to gain essential experience as part of the race team in 2012.  In this position, I will do my utmost to help the team to set up for a great race weekend and also look forward to playing a role off the track with the team at the factory and with our partners.”

The team are yet to announce who will drive alongside Maldonado next season, but now that Bottas has been confirmed as a reserve driver, it is thought that Adrian Sutil is the most likely choice, assuming Rubens Barrichello is not retained.