2011 was the first year in a new chapter for the Porsche Carrera Cup GB, a new car and a new crop of drivers who came in to challenge the old guard and ended up overthrowing the likes of Tim Harvey and Michael Caine.

Two member of this new generation fought for the title all the way down to the final weekend, James Sutton clinching the title ahead of Redline Racing teammate Michael Meadows on the Silverstone national circuit in October. However, only one half of that team returns for the 2012 campaign.

Sutton's departure – leaving Meadows driving the no.0 car for 2012 – is just one of a number of changes fans will notice when the series lines up at Brands Hatch this weekend. Former BTCC driver Stephen Jelley and Euan Hankey have both departed the series as have the powerhouse Motorbase Performance team who entered as many as five cars in 2011.

Despite the high profile exits Porsche announced a grid of over 20 cars at the series media day earlier this month, spanning the now familiar Pro, ProAm1 and ProAm2 classes.

Michael Meadows starts the season – arguably – as favourite. The best of the drivers staying on from 2011, Meadows set the pace at the collective pre-season test in his all silver SAS sponsored car. Meadows, however, played down his position as favourite, pointing out the wealth of talent lined up behind him on the entry list.

“Obviously Glynn [Geddie], he got a good record in this,” Meadows told The Checkered Flag. “[Richard] Plant, [Sam] Tordoff, at times last year they were quick, I think Sam was on the front row for round two and Plant's had a couple of podiums. They'll all challenge me hard. And then there's Daniel Lloyd, Porsche wouldn't have chosen him is he was slow. In previous years I think it's been predictable who's going to win but last year and this year it's open. No-one's going to dominate it.”

After departing the Carrera Cup for 2011, taking the British GT Championship for CRS Racing, Glynn Geddie will be Meadows' closest rival geographically, his black Porsche being run out of the same Redline Racing stable. The Scot has improved greatly since he was among those left trailing by Caine and Harvey in 2010, his return to the single make championship should illustrate just how much.

Down the pitlane Team Parker Racing bring three young drivers to the Pro class in sophomores Plant and Tordoff, both of who are aiming to climb up the order in their second year in Porsches following their conversions from single seaters and Clio Cup respectively. Joining them for 2012 is the latest man awarded the Porsche Scholarship in Daniel Lloyd, likely to improve throughout the season as he learns the Porsche.

Also joining the championship on a permanent basis in Ben Barker. Briton Barker has plied his recent racing trade in Australia, but returned to the UK for Carrera Cup outings at Snetterton and Knockhill last summer, scoring two podiums in his flying visit with Parr Motorsport. This season Barker returns to Parr for a full season and given his 2011 forms immediately takes a place among potential race winners and champions.

The final man in the Pro category is a wild card. After winning the ProAm1 title last season Lithuanian Jonas Gelzinis steps up to the top class, remaining under the Juta Racing banner. Gelzinis put on several surprising assaults on the overall win and podium last season, though he still says he was racing conservatively, aiming simply to win the class, rather than the race overall. With the differentiation between class win and overall win removed he promised to be “more aggressive and take more risks” in 2012.

Gelzinis leaves behind a very competitive class. Ahmad Al–Harthy, Rory Butcher and Derek Pierce who all chased Gelzinis – in vane – for the 2012 class title return for another battle. All are very capable of winning the class, though on the strength of previous results none are likely to dominate as the Juta man did in 2011. 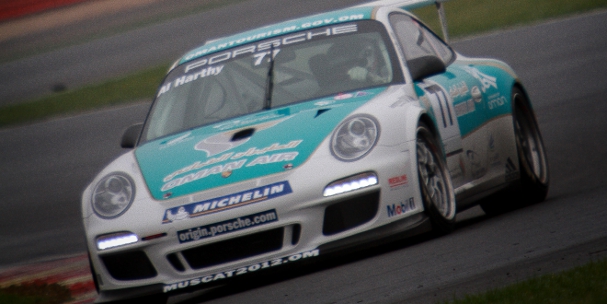 Ahmad Al-Harthy, just one of several drivers who should be contending for ProAm1 wins straight away (Photo Credit: Gary Parravani/xynamic.com)

That prospect promised to make ProAm1 a close fight, especially as new names have joined the class over the off-season. After impressing in the club run Porsche GT3 Cup Challenge Oly Mortimer steps into the Carrera Cup with the GT Marques squad, who return as a full time team after making only starts with Freddy Nordstrom last campaign. Likewise Irishman Michael Leonard – a regular visitor (if that's not an oxymoron) to Carrera Cup grids in recent years lines up to start another year with Team Parker Racing.

Chris Dymond – in a second chromed Parr entry alongside Barker's – Will Goff and Spaniard Victor Jiminez join the class. Jimenez making a career move from Formula Renault BARC into sportscars, admits the switch will be difficult to make, but is already aiming at podiums by the end of the season.

This season's ProAm2 category is likely to be a rematch between the two men who battled it out in 2011, George Brewster and Keith Webster, who remain with Celtic Speed and Redline for another season.

The destination of the title was settled by just five points in favour of Brewster when the checkered flag fell over Silverstone in October. However, Turk Yucel Ozbek joins the championship full time this year, after appearing on the scene for the second half of 2011. In the ten race he contested – from Snetterton onwards – he picked a pair of class wins and four further podiums. A repeat of such form will make him another series contender for honours.