Butcher Does The Double At Croft 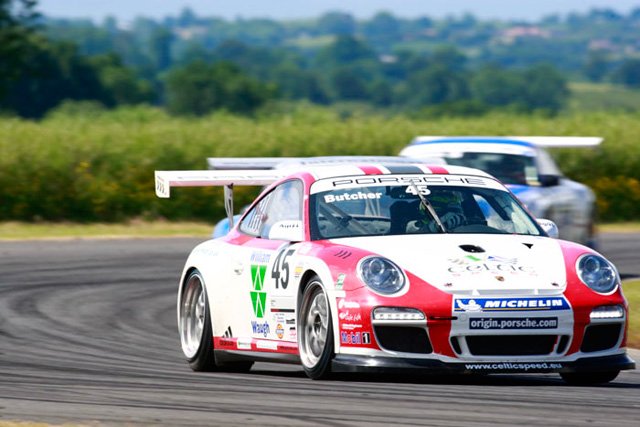 Rory Butcher of Celtic Speed made it a perfect weekend at Croft by taking overall victory in the final race of the weekend and round ten of the Porsche Carrera Cup GB on Sunday. Despite driving under the shadow of constant pressure from Michael Meadows, Butcher held on to take his second victory at the North Yorkshire track in as many days. Further down the field there were wins for Ahmad Al Harthy in the Pro-Am1 class and Will Goff in the Pro-Am2 class.

Butcher started on pole for the second race, as he had done for the first, but yet again a tardy start left him vulnerable into the first corner. Meadows had made a strong start and was actually slightly ahead before the braking phase, but Butcher snatched the lead whilst Meadows was temporarily unsure of the position of Butcher's Carrera. Of the start, the race winner said: “[Meadows] was head into turn one, but he gave me some room and that was crucial.”

Butcher held onto the lead for the entire fifteen lap race distance just ahead of Meadows, who had championship rival Jonas Gelzinis on his tail. Meadows knew that he could not afford to make a big move for the lead and risk a second DNF of the weekend, so had to make do with second.

Butcher appreciated Meadows' mentality: “He was fair the whole way through, and once I got in front I could hold him off. It's a great feeling to win both races; it doesn't get much better than this! I'm also in striking distance of the main championship contenders now.” For his efforts Butcher was awarded 'driver of the weekend' and Celtic Speed earned the equally prestigious 'team of the weekend'.

Fourth place went to Daniel Lloyd of JD Pierce with Team Parker, but he ran with considerable pressure from Sam Tordoff and Glynn Geddie for the first half of the race at least.

The Pro-Am1 class was a much more processional affair, with no-one ever mounting a serious challenge to eventual winner Ahmad Al Harthy. Second place in the category went to Derek Pierce as he raced Pro driver and team-mate Richard Plant.

Oly Mortimer salvaged the final podium position in Pro-Am1. Race winner Al Harthy said: “I'm delighted. It was hard to do it again, but I had a good start and I kept pushing. It's been a perfect weekend.” This was of course Al Harthy's second win of the weekend, after he took the Pro-Am1 honours in round nine on Saturday.

Will Goff made it three double winners out of three by finishing first in the Pro-Am2 class, but he had to race hard for it. He was initially behind Juta Racing's Tautvydas Barstys until managing to edge ahead at Tower after Barstys ran wide at Tower corner. From then on it was close, but Barstys could not find a way to reclaim his early lead. “I had a lot of pressure and it wasn't over until the chequered flag.” said Goff. His second win of the weekend means he moves to the top of the Pro-Am2 championship standings.