Di Resta Disappointed with ‘only’ P10 in Valencia Qualifying 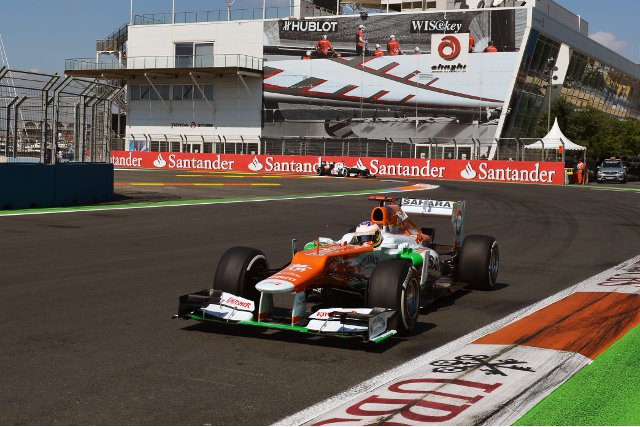 Despite Force India getting both cars through to Q3 for the first time this season, Paul di Resta thinks that he should have qualified higher than P10 for tomorrow’s European Grand Prix.

“It was a strong qualifying session but I feel I could have been higher up the grid because I didn't get the perfect lap together in Q3,” said the Scot. “We were the quickest car in Q2 and if I could have repeated that lap time in Q3 I would have been a couple of rows higher up the grid. I was trying to squeeze a little bit extra from the car but I locked a wheel and lost time in the final sector.

“I will try and focus on the positives because we have been strong in all the sessions, the car is well dialled into the circuit, and I think we will have good race pace for tomorrow.”

Team-mate Nico Hulkenberg, who qualified eighth, also think the car was capable of more. “I think overall it's a great result for the team to get both cars into Q3, but maybe we were hoping for a little bit more than P8 and P10, especially considering how we have performed so far this weekend,” said the German. “I don't think the increase in temperatures helped us because the car felt more difficult to drive today and a bit nervous at times.

“For the race tomorrow we are still near the front and will take the fight to the cars around us to try and come away with some points.”

Team principal Vijay Mallya is hopeful of a good result tomorrow, and expects the VJM05 to be strong in the warm conditions promised for Valencia.

“Another extremely close qualifying hour and I'm pleased that we were able to get two cars into Q3 for the first time this year,” he said. “The car has been extremely quick throughout practice and we showed that again today with some very competitive times in Q1 and Q2.

“When it came to Q3 both drivers didn't quite deliver perfect laps, which costs us a few positions on the grid, but we are still well placed to fight for points finishes with both cars. We expect a tough race tomorrow with very hot temperatures once again, but the car is strong, we have a good understanding of the tyres and our long run pace looks promising.”