Rick Pearson dedicated his victory in the first Fujifilm Classic Touring Car Trophy race to David Leslie as he won in the RML Nissan Primera driven by the Scotsman in the 1999 British Touring Car Championship.

Pearson's victory came despite the presence of pole-sitter and popular favourite Frank Wrathall in an ex-Richard Kaye Vauxhall Vectra. Leading the pack to the rolling start Wrathall jumped out to a huge early lead over Pearson as the four supertouring Primera that had taken second to fifth on the grid was halved to just two in the opening lap, Ian Stinton retiring his 1997 example after completing the opening tour while Keith Butcher in a sister 1999 car to Pearson's pulled off on the Wellington Straight.

Despite his pole lap being nearly 2.5 seconds faster than his nearest challenger, and his initial lead it was not Wrathall pulling away at the front by Pearson clawing back towards the Vectra owned by Jonathan Westbrook.

Pearson's task to win the race was made easier when Wrathall was deemed to have jumped the rolling start, the current BTCC driver given a ten second penalty that dropped him to second, a Pearson move on the road only confirming the change of lead, Wrathall falling back, though there was enough of gap back to Richard Hawken – driver of the other Primera to have survived the opening lap – to keep him in second place even once the penalty was taken into consideration.

In the most modern car on the grid – a 2004 Alfa Romeo 156 – Neil Smith finished fourth after a fighting drive after a half spin at The Loop on the opening lap dropped him to 14th. Smith's progress through the pack was steady, but not trouble free.

The latter stages of his drive up the pack brought him into conflict with three of the stars of the race in the Ford Sierra RS500 of Simon Garrad, Paul Smith and Craig Davies.

The more nimble Alfa Romeo had the clear advantage under break, and several times was ahead – or at least alongside – the Labatt's liveried car of Smith before the fearsome horsepower of the Group A machine moved it clear before the braking zone for the coming corner.

After passing his namesake for good Neil Smith finally got past Davies' ex-Chris Hodgetts Sierra at the loop. Davies would fall further back a lap later when Dave Jarman, Alvin Powell and Jan Bot streamed past through the arena section, Davies and Bot coming close to contact at the apex of Aintree Corner as the German threaded his 1991 BMW M3 past the Sierra two years its junior. 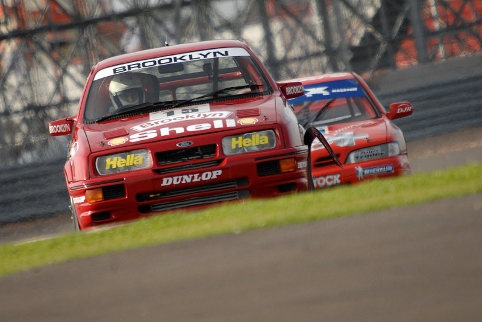 Davies had an eventful race, his car ending the race with front bodywork flapping after contact with Powell earlier in the race, Group A Sierra beating off supertouring Mondeo momentarily for Ford honours.

However, the hairiest moment came in the closing laps when Davies slewed wildly across the National Straight, only just gathering up the slide before smashing into the waiting pitwall.

Thanks to a spin by Smith in the Labatt's car though he finished in eighth Davies came home as best of the RS500 in the race, one place ahead of Graham Wait's Sierra with Smith rounding out the top ten.