Disapointment For The Brits As McLaren Fail To Deliver 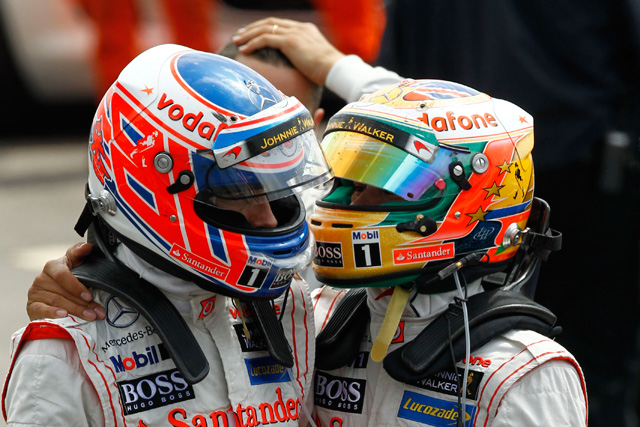 McLaren continued their disappointing form in recent races at Silverstone today. Despite more upgrades being brought to the car for this weekend, it was a difficult weekend for home favourites Lewis Hamilton and Jenson Button.

Despite giving the home fans something to cheer about by leading at one stage – Hamilton finished from eighth place.

“It wasn't a great race for me – I just wish we could have done more for the fans today. We tried as hard as we could, but we simply didn't have the pace this afternoon.”

“My tyres were still good at the end of my first stint, and I was able to hang on to Fernando. So it's hard to understand how we could be leading the race at one point and then fall back to eighth place, especially as our car doesn't feel bad overall,” Hamilton said, but the 2008 champion remains confident.

“I raced my heart out and was flat-out right to the end. We're still in the hunt for the world championship – and, if we can find a bit of lap-time, we can stay in the hunt, too.”

“I gave the fans a little donut on the slow-down lap – simply because I wanted to say thank-you to everyone who came out to watch us here today. I'd love to have done better in my home Grand Prix, but, regardless, the fans were fantastic throughout the weekend.”

Meanwhile, Jenson Button recovered from a disappointing day in qualifying to finish in the points in tenth place.

“It was good to get a point in my Grand Prix, but of course that's not what we ought to be doing: we're a front-running team and we've got a bit of work to do to start running at the front again. I don't think we made any mistakes with our strategy today; we're just not quite quick enough at the moment, that's all.”

“Most important of all, though, I'm a bit sorry for the Silverstone fans, because they've been truly amazing this weekend. Like them, we wanted a lot more from today's result. So we're sorry, guys; we weren't able to fight at the front today, but hopefully we'll be back there soon,” he added.

Meanwhile, team boss Martin Whitmarsh believes the team would have enjoyed a stronger race had the expected rain arrived.

“A dry race wasn't what we were expecting – and, undoubtedly, had it been a wet race, as was predicted, our competitiveness relative to that of our opposition would have been significantly enhanced,” he said.

By Jasmine Butler
4 Mins read
Mercedes-AMG Petronas Formula One Team continued their run of being the top dogs with a seventh world title.
Formula 1

By Paul Hensby
1 Mins read
Stefano Domenicali says Formula 1 has a great depth of talent in 2021, and he praises the single-seater pyramid the FIA has been building in recent years for it happening.