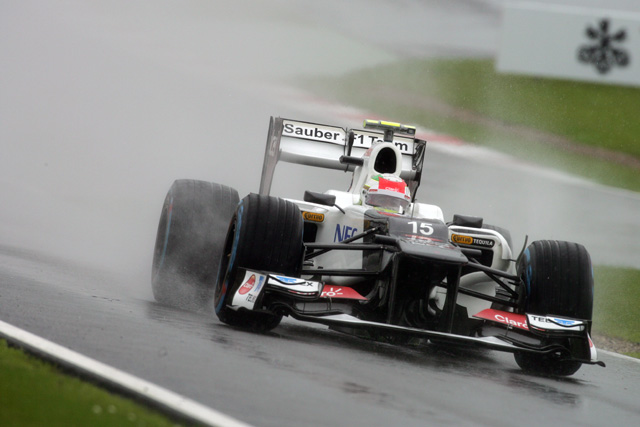 At one point in qualifying for the British Grand Prix it was looking like Sergio Perez had done enough to take the fastest time of Q2 and easily make it through in to the third and final part of the session, unfortunately it wasn’t to be.

After making it through Q1 comfortably Sergio Perez was topping the time sheets in Q2 when the session was red flagged with team-mate Kamui Kobayashi in sixth place. By the end of Q1 Perez had slipped to seventeenth place with Kobayashi in twelvth.

“We made the wrong decision when we went for intermediates instead of rain tyres after the break, but I also had traffic.” explained Perez “I was driving behind Daniel Ricciardo and could hardly see anything. It is such a shame because we clearly had the pace to fight for a top position here. However, we made a mistake and now have to try hard to recover from that in the race.”

Kamui Kobayashi admitted they made the wrong decision with tyres when the session resumed following the break for weather. “We started on intermediate tyres after the break and this proved to be the wrong decision. I pitted and changed to rain tyres, but then I only had time for one flying lap and in the difficult conditions this wasn't enough to improve as much as I needed to make it into Q3.

“Before that we had a very good chance of fighting for a top position. Our pace was really good in the wet. It is a missed opportunity. For tomorrow's race I don't really care whether it's wet or dry. I'll be starting a long way down the grid and will fight as hard as I can.”

After slipping down the positions the Japanese driver is also faced with a five place grid penalty from the last race in Valencia.